Ballet choreographers have been working on Broadway all the way back to Balanchine (four shows with Rodgers and Hart, among many others). Agnes de Mille was another (her Oklahoma! changed everything). And then along came Jerome Robbins, who changed everything all over again, when he stepped up from creating the dances for shows to directing them—in fact, becoming the “auteur”: There would be no West Side Story or Fiddler on the Roof if he hadn’t dreamed them up. And Bob Fosse followed the same path.

Today that trajectory is commonplace: We’re not surprised that the choreographer Christopher Wheeldon has hit Broadway as the director of our latest big musical, An American in Paris—10 years ago he made a ballet of the same name for New York City Ballet, a pallid and pathetically reductive work that fortunately and swiftly vanished away.

His new version is neither pallid nor reductive. Quite the opposite. It’s showbizzy, and it’s stuffed to the gills with production—the first act has so much scenery sliding and gliding and soaring that I kept wanting to duck. (Later, it calms down.)

Wheeldon has been moving in this direction for some time now, having created a series of full-evening ballets designed to be hits. He’s given us an Alice in which Lewis Carroll’s great sardonic masterpiece is turned into a mushy love story (!), and a Cinderella, of no dance interest and with a muddled libretto from Craig Lucas. Both of these had some spectacular scenic effects.

Then last year he made The Winter’s Tale for the Royal Ballet, his home company, and a serious effort. The dramatic first act laid out the story convincingly; the second act, set in Bohemia, was marred by a far too knowing Perdita and long, long stretches of generic group dancing from the rustics, with no understanding of the innocent pastorale Shakespeare created.

Wheeldon has always been at his thinnest when choreographing for large numbers of dancers. His specialty is the rapturous pas de deux, which to him means over-complicated partnering and endless swoony overhead lifts.

Those swoony lifts are back in An American in Paris, and the pas de deux are the weakest aspect of the choreography. But Wheeldon’s increasing tendency toward showmanship has paralleled a decline in originality in his work for serious ballet: He’s been on the endangered-species list of important choreographers for so long now that it may be too late for him to turn back, even if he wanted to—which I doubt he does. I wish he had learned from Balanchine and Robbins during his years at City Ballet that high showmanship and high art aren’t mutually exclusive.

And yet this American in Paris is not a disaster, given its real pleasures, the most obvious being the casting of City Ballet’s Robert Fairchild as Jerry, in what we can’t help thinking of as the Gene Kelly role. (His sister, Megan, another City Ballet principal, is making an equally happy impression in On the Town.) Fairchild is a terrific dancer, a good-looking all-American type, stronger when dancing a “character” than as a pure classicist, but always appealing, and perfect here.

He also sings well enough—better than Kelly does. He’s at his best, his most comfortable, when the libretto gives him a chance to break out into real ballet moves—he takes charge of the stage and the dancing comes to life. It’s exactly like what happens in the movie when Kelly stops being a romantic lead and breaks into his wonderful tap dancing: All the longueurs of the story and dialogue are forgotten, and we’re left with the genuine article. Fairchild is the great reward of this musical—his charm (and honor) intact.

Craig Lucas, again Wheeldon’s librettist, has based the story on a new ballet rather than on Jerry’s career as an artist—just as well, as the notion of Fairchild being anything but a dancer is hard to swallow, and this is a dance show. The love interest in the movie, Leslie Caron—a dancer in real life—doesn’t play a dancer. In the new musical, Leanne Cope, from the Royal Ballet, is a dancer, and she’s fine, if you like the gamine approach. It makes sense, then, that the big new ballet that’s the climax of the plot is centered more on her than on Jerry, whereas the climactic “American in Paris” ballet in the movie is all about Kelly, a bona fide movie star.

Alas, the new ballet isn’t very interesting, although when Fairchild joins Cope in a kind of dream sequence, there are amusing echoes of the slinky faux-sexiness with which Roland Petit and his wife Zizi Jeanmaire were shaking up the French dance establishment during the very postwar period that’s the setting both for this show and the movie.

Some of the big numbers are very effectively staged—the show comes alive at the start of the second act when everyone’s resistance to swing breaks down in the irresistible “Fidgety Feet.” And the inevitable showstopper “I’ll Build a Stairway to Paradise”—led by the persuasive Max von Essen, who’s a real singer—stops the show, in its calculated way. It’s the big group dances that, again, are flat. Wheeldon is turning out to be better at putting on a show than at making memorable dances.

I wish he hadn’t allowed the musical arrangements to get so complicated—they don’t help. Did we need a chorus behind “The Man I Love?” And why break off one of Gershwin’s most winning songs—“Who Cares?”—and never come back to it? “Who Cares?” comes across as a dud, which anyone who knows Balanchine’s ballet of that name—and Wheeldon certainly does—has to find disheartening.

Which leads to the biggest question of all. Which isn’t “How can this musical compete with the much loved movie,” but “How can all the razzle and the dazzle, and the uniformly talented cast, compete with Gershwin’s songs?” Gershwin seems more exploited here than reimagined. On the other hand, Shakespeare will survive Wheeldon’s perfectly capable and relatively empty Winter’s Tale, and Gershwin will survive his perfectly capable and relatively empty American in Paris. 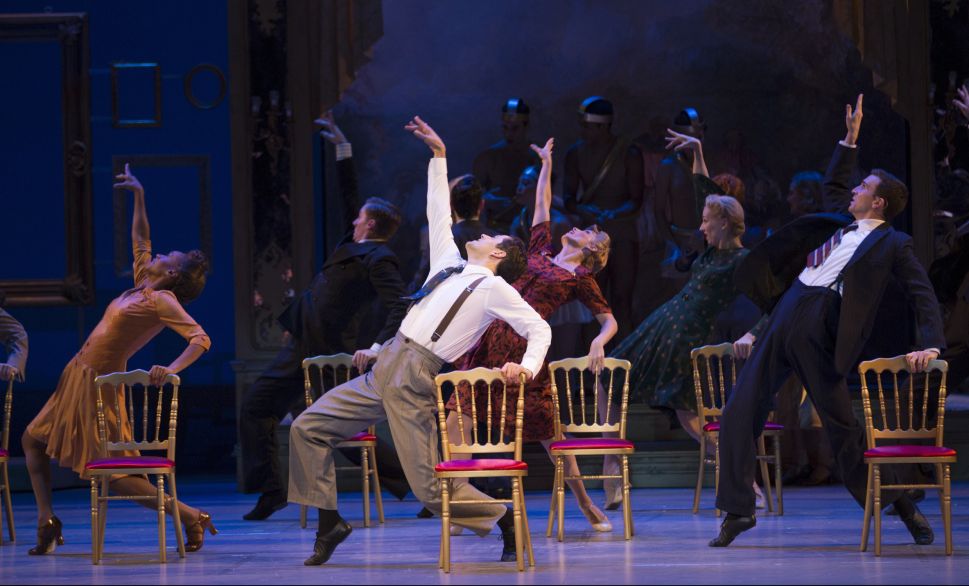