Julie Macklowe—née Julie Lerner—defies all the conventional ideas of what a well-heeled New York woman might be. She sits at the helm of her own cosmetics empire, vbeauté, which she yanked from the beauty counters of Bergdorf Goodman in lieu of a lucrative deal with HSN, and counts most New York fashion designers as close, personal friends.

“We launched vbeauté in November 2011 at Bergdorfs,” Ms. Macklowe told the Observer. “I was slaving away on the counter trying to hawk vbeauté to my friends.

It was so rewarding in terms of knowledge and experience.” After a two-year stint in the BG cosmetics department, it was on to greener pastures at The Home Shopping Network last fall.

“At Bergdorfs we learned that we were spending a lot of money on advertising and selling expenses, but our company’s vision was that all women should have the best skincare,” she added. “When you’re buying a $500 cream you’re paying for the ads or that salesperson who is forcing you to buy it. Now it’s the customers’ choice to choose us. I did something I feel like no other company has ever done, and took the exact same product without changing one thing. HSN allows a great group of women across America to choose us. That, to me, is something no other brand has really done. They always change it. They make a lower version. We want to bring the exact same thing without sacrificing anything.”

Ms. Macklowe began her career surrounded by cash, managing hedge funds from New York to Hong Kong. “I never thought I would have a beauty company,” she admitted whilst we sat at her uptown abode. Born in Aspen, Colo., and educated in Charlottesville, Va., she resides in a perfectly appointed pied-a-terre with her real estate mogul husband Billy, and daughter, Zoe.

“Billy and I met on a blind date in NYC on May 4, 2003, got engaged on April 4, 2004, and got married November 21, 2005, so we’re just past 10 years,” she said, beaming. Ms. Macklowe is a sophisticated mix of American charm. There is a calmness from her days growing up in the West, a bit of a Southern accent that emerges after a cocktail or two and an uptown lockjaw that everyone seems to acquire in that part of the city.

Vbeauté has raised more than $8 million in capital since its inception and Ms. Macklowe’s vibrant persona works well for her on air, pulling people in to buy the products. “We’ve had three shows, and sold out each time,” she said with some pride. “My face cream sold for $145 at Bergdorf, and the fact that we’re selling it on HSN for $53, and HSN is allowing women out there to have that same luxurious quality that very few could actually come to New York to experience, it’s just very rewarding. We’re able to empower women to feel confident with this luxurious product, and not have to pay a fortune.”

Business savvy aside, Ms. Macklowe is also a permanent and fun fixture on the Manhattan social scene. Her presence livens up the dullest of shindigs. When she is not out and about, she is holed up in her sumptuous abode or at her Sagaponack summer compound, featured by Harper’s Bazaar in 2011.

Yet, despite following all the socialite rules, Ms. Macklowe’s appearance goes against the grain. Her short blonde locks are sometimes styled to the hilt as an inflated mohawk or simply swept to the side when she wants to let the clothes do the talking.

If there is such a thing as a clotheshorse, Ms. Macklowe is the prized filly of Manhattan’s fashion scene. When we met, she had just returned from the couture shows in Paris. “There are very few people—and definitely not myself—who are buying lots of couture. It is such a fortune, but it sets the trend! However, I did manage to buy a hot pink mink fur coat at Dior. Then I looked at Man Repeller’s blog the other day, and Leandra asked, ‘Is a hot pink fur coat an investment?’ For the record, I don’t think it’s a good investment, but it is fun to wear.”

Another luxurious but impractical favorite is Ms. Macklowe’s set of essential Chanel tracksuits. “Chanel came up with all of those tracksuits, and I obviously had to buy every single one, since it’s now acceptable to go out in your tracksuit. Obviously they made this collection for me! There’s also something so beautiful about wearing an evening look, but don’t confuse yourself; I’m not sitting at my desk every day in a ball gown!”

In New York, Ms. Macklowe is one of the few social stars who directly contribute to the growth of young designers in the city. Not through loaned gowns worn to galas and returned to the showroom the next day, but through actually buying their clothes. Granted, the entrepreneur loves her Parisian couture, but there is a flexible quality to young American designers she cannot deny. “I always like to support up-and-comers. I go to Sophie Theallet, or Bibhu [Mohapatra], or one of the younger designers who are really breaking out. I just feel like you really have more impact on their business. I think they appreciate it more that you’re there, and I think, frankly, if you have ideas, they’re much more open to it. You know, you’re not going to change Ralph Lauren! The young designers in New York are almost like couture. Sophie Theallet will make me a dress from scratch,” she began to list. “Zang Toi has made me two dresses from scratch for The Met. Honor, designed by Giovanna Randall, designed me a dress last year for The Met also from scratch.”

With her devil-may-care outlook on style, Ms. Macklowe is open to fashion risks even in the most buttoned-up situations. “I had the Sloan Kettering luncheon today at Daniel,” she said with a laugh. “I was in blue leather Balmain pants, and a Lucienne purple long-sleeve shirt with a naked Adam & Eve design on it, and I literally forgot it was a lunch. Everyone there was in Chanel dresses, and I thought they must think I’m a homeless person! I had my Phillipp Plein backpack on, too! They must have been thinking, ‘How did they let the homeless Julie in?!’ ”

The custom-made looks, punky hair and tough but fun-loving attitude have created an essential Julie Macklowe style, which makes her popular with bloggers and Bill Cunningham. “I guess I’m an emotional dresser,” she summarized. “That’s probably true for a lot of women, but I dress for what I feel like in the moment. I’m not wearing a short skirt in the middle of winter. I’m wearing leather pants! I’m an Aspen girl. It’s cold out. It has to just feel right. A lot of times it’s easy to get caught up in dressing in trends that everyone else is wearing. You’ll see five people in the exact same dress. Not that those aren’t great pieces, but what really counts is the twist you put on it.”

A fashion epithet perhaps, but one that applies equally to Ms. Macklowe’s approach to business and life itself. Surrounding herself with creativity has helped build a personal brand that is uniquely, somehow, New York. 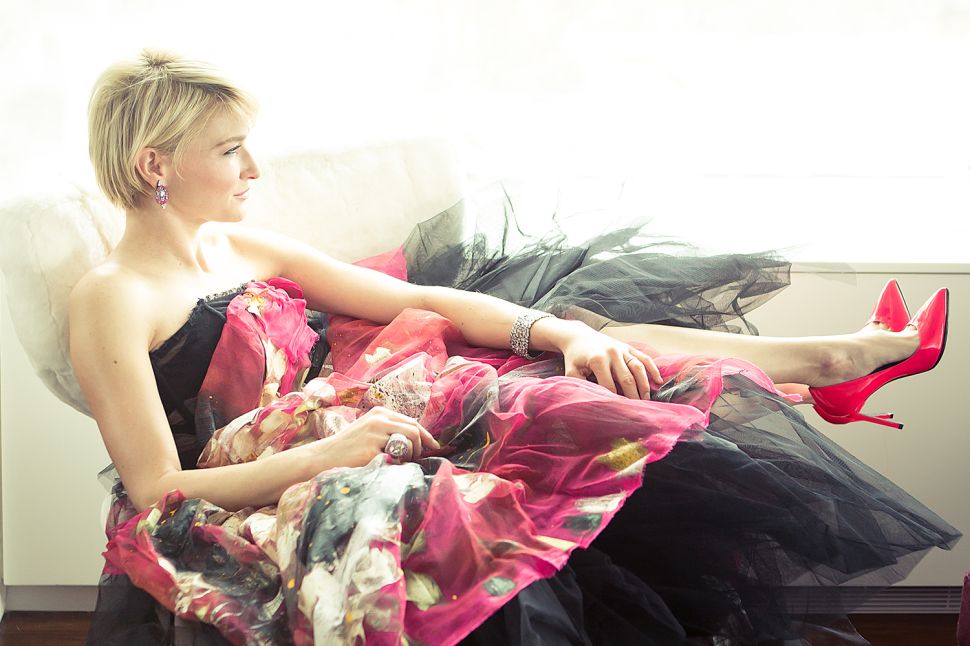