Catcalling, a form of street harassment, is part of a large problem women in New York—and just about everywhere else—face everyday.

Feminist Apparel, a nonprofit whose designs shed light on gender issues, jumped on the effort to end catcalls in accordance with Anti-Street Harassment Week.

Alan Martofel, production coordinator of Feminist Apparel, told the Observer that 50 signs have been put up to address the issue around the City, with more to come.

The signs state “NO CATCALL ZONE, end street harassment” with an image of a cat appearing to shoot lasers out of its eyes to nearby dancing stick figures (one of which appears to be holding his crotch). Sticker versions of the design are also making an appearance.

This is the first community-based activist campaign funded by the sale of Feminist Apparel t-shirts, according to Mr. Martofel.

“We hope to get at least one sign up in each borough by the end of the week as street harassment and catcalling is obviously a universal issue not contained to any one neighborhood,” Mr. Martofel said.

He said the nonprofit is also working with Pussy Division, a Philadelphia-based feminist guerrilla collective, to put signs up around Philly, too.

“Awareness-building and dialogue-creation surrounding feminist issues is at the core of our nonprofit’s mission, which is why getting these street signs made and up and working, alongside Pussy Division, has been such a fulfilling experience,” Mr. Martofel said. 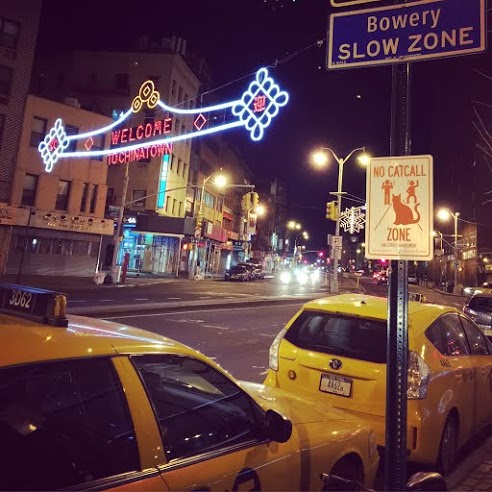