With Liturgy’s new album, The Ark Work (Thrill Jockey), Hunt-Hendrix compresses his vast taste into a single hour of music. The result is overwhelming; with undulations of strings, electronica synths and beats, black metal, and myriad other sound forms simultaneously penetrating the skull. Give The Ark Work some time, though, and it’s hypnotic. Outstanding cut “Kel Valhaal” is tight and regal: medieval instrumentations and Hunt-Hendrix’s droning, yet rhythmic annunciation reign terror over superhuman Greg Fox’s carefully executed march-like drums, motifs reiterated throughout The Ark Work’s tracklist.

Over the past few years, Hunt-Hendrix has been on the receiving end of some criticism. With his manifesto “A Vision of Apocalyptic Humanism” published in 2010 (on the topic of what he calls “transcendental black metal”), he’s been labeled as pretentious and criticized for placing himself too high in black metal’s rankings. “Just [because] you play in a semi-famous band doesn’t mean you’re the prophet of the black metal gods,” one anonymous metal head directs at Hunt-Hendrix in the comments section of a Vice article.

Hunt-Hendrix is familiar with the contempt and divisiveness surrounding Liturgy, but he’s also aware of those who support and understand the band. When the Observer recently caught up with him he discussed how philosophies, like his manifesto, are meant to inspire debate, and explained The Ark Work’s stylistic choices and desired effects on the listener:

The Observer: Your vocals on The Ark Work feature sustainings and warpings of single notes. Are you trying to achieve a shamanic-like energy with this approach?

Hunter Hunt-Hendrix: I wanted to use my voice as a medium for occult forces rather than as a vehicle for self-expression. To sing emotively, but with a sort of cyber-feral anonymity. On previous records my vocal performance was limited to either screaming or dense digital loops of wordless chant; for this one I wanted to have a certain relationship to melody and subjectivity, but still retain a more ritual aspect.

Did Stravinsky and/or any other composers inspire the album’s classical facets?

Stravinsky’s “Rite of Spring” is a really important piece for me. There were years of my life where I listened to it practically every day. The jagged syncopations, simultaneity of conflicting textures, ritual ruthlessness combined with tender sincerity. Messiaen’s “Turangalila” is like that, too. I also think of Scelsi, Ligeti, Xenakis, the whole “subgenre” of classical music is a big influence on the way that I hear and what I yearn for.

Many sounds are happening all at once on the album—like MIDI horns, chimes, guitars, etc. on “Follow” and “Kel Valhaal.” Were simultaneous sounds what you had in mind while conceptualizing The Ark Work? If so, what was the reason for coveting synchronicity.

It isn’t just a synchronic layering of sounds, it is also a layering of styles; styles that go along with identities and roles—punk, rap, metal, sacred music, experimental music; these styles all carry little signatures that make you say and feel, “I belong to this.” I wanted to compile these things in a subtractive, contradictory way, crashing them against one another so as to make music that, though it combines sound worlds that are truly resonant with one another, is impossible to identify with—to crack open the tribalism that spontaneously arises with music, facing the listener with the underlying abstract negativity of the universal, where the New can be born.

I care a lot about the flow of an album. I had this track order and flow in mind even before a lot of the details of the compositions themselves were worked out. Maybe it’s an old-fashioned way to approach an album at this point—as an organic whole with interdependent parts, rather than as a series of singles—but that’s the way I like to do it: rock album.

In an interview with Noisey, you describe your current style as “Burzum-meets-Bone-Thugs-N-Harmony.” Which specific elements of these two artists do you attempt to mirror in Liturgy?

I kind of regret allowing myself to be quoted putting it in as simplistic, clickbait-y terms as that, actually. I really winced when I saw that in print. But, to follow through, I am referring to the guitar and drumming style found in Burzum, and the vocal style of Bone-Thugs. It’s an example of the subtractive collision I just described. Musically the styles are profoundly resonant, but at the level of cultural identification, Midwestern rap and True Norwegian Black Metal are not compatible.

Are you trying to set up any art gallery and/or museum performances of The Ark Work? (I saw that the MoMA had Liturgy play at their Grand Openings series a few years back.)

I don’t really deliberately try to set those up, they just end up happening. In the fall we played at [New York gallery] Greene Naftali, things pop up. The issue of Liturgy’s audience has always been thorny; it’s a band that has historically made a lot more sense in an art context—or it especially did when we were seen as a black metal band but hated by the black metal community. During that era, the true audience for the whole thing was the art scene in a way, or at least the wider gaze of Western history, rather than the black metal community itself. Like the whole Internet meme war was a giant collaborative multimedia performance that would make more sense to someone coming from a background more like my own, or to a future generation. This album is different—it isn’t really black metal; it is more obviously experimental at the musical level and also more obviously a force of pure emotion. Paradoxically, it feels like it makes more sense to be in a direct relationship to an audience of listeners who just want to rock out and not think too hard. I’ve noticed that the people who seem to get this album most easily are college kids who listen to cloud rap and post on 4chan.

Do you believe the criticisms of your “A Vision of Apocalyptic Humanism” are valid? And would you ever consider sharing in your lyrics how you feel about your critics, or do you think that your musical expression should be separate?

I’ve never seen a criticism that addressed the content of the text. What people criticize is the act of writing it itself and delivering it at a philosophy symposium: The gesture—and I’m not in a position to say whether criticisms are valid or not, because generating criticism is intrinsic to a gesture like that. It was interesting enough that this grounding moment began producing energy, actually gaining legs, causing strife, doing the things that a manifesto does, rather than being ignored. A gesture like, “I declare the existence of Transcendental Black Metal” only has meaning if it is undecidable, giving rise to opponents along with an opportunity to struggle and suffer in its name and test it out in different contexts. At the time I was very interested in Badiou’s concept of the truth procedure. The declaration has the status of an event, something like the resurrection of Jesus Christ or the dream of the 1960s: Did it really happen? Is it legitimate? It has to be an inherently open question, so that there’s room for faith. 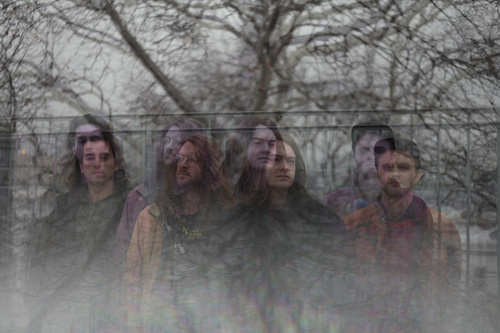