In the last few years, a number of my friends have taken up CrossFit. I know this because they don’t shut up about it. When I’m around more than one of them at a time, it completely changes the way we socialize and speak.

I’ve sit through business dinners at fine restaurants where the entire conversation centered around personal records (“PRs”), One Rep Max (“1RM”) and what to the untrained ear sounds like the description of oddly shaped, multi-dimensional lumber—7x5x3x1, 5x5x5x5, 3x1x3x1x3x1, etc. etc.

I used to think a wad was just something you created when you folded a stack of cash or finished with a Kleenex. Not anymore. Thanks to these intrepid clean-and-jerks, I now know WOD means “Workout of the Day,” during which much kipping and double-undering occurs for AMRAP. Still confused? Don’t worry, CrossFitters can’t wait to tell you more! No matter the environment.

At a house party last March, an acquaintance cleared a space in the middle of the living room to teach his girlfriend proper technique for the jerk and the snatch. They went back and forth for close to 25 minutes, through the midnight hour, pantomiming each lift. Him grabbing the invisible barbell, hitching up his pant legs as if he was straining against real weight, then properly executing the imaginary lift and pedantically tinkering with her form as she tried to copy his movements. Why they would put on this performance of CrossFit Kabuki, I have no idea, as any couple with the gall to disrupt the flow of a party for a lifting tutorial already has ‘jerk’ and ‘snatch’ covered. Also, they’re probably good at the lifts.

It reminded me of those halcyon days back in the mid-2000s when swing dancing and then salsa were hot. You’d go to a party or a club and everything would be normal until that one couple walked deliberately to the center of the room, took up position and launched into a routine they’d learned two days earlier at dance class. In most normal places, this ground the action to a halt. The room would bond around a communal sense of WTF?? and slowly the offending couple would recognize that all eyes were on them for all the wrong reasons. Soon enough, they’d recede into the crowd and disappear forever into the swing rooms and salsa clubs that you now only hear about in Facebook photo albums and #TBTs.

I was hoping this party would follow that kind of trajectory: Conversation peters out, guests stop freely mingling, freezing in a tableau of social faux pas, and then finally Mr. & Mrs. Jerk-Snatch get the picture. I didn’t feel like this was an unrealistic outcome given the circumstance. They had commandeered the heartbeat of the party space as their own. At peak party hour no less. Surely, someone was going to put a stop to it and the appropriate amount of shame could be meted out through the sideways glances of uncomfortable party-goers.

Instead, no one batted an eyelash.

Not only did no other guest even flinch, they actually tried to jump in, offering pointers or just nodding the knowing nod of the WOD. Totally bro, that was a no-rep. To my great dismay, I was at a party made up entirely of CrossFitters—the swing dancers and salsa shakers of the 2010’s. Like a T-1000 frozen by the liquid nitrogen of singular focus, the party ossified around this awkwardly primal courtship display until, just as quickly, it shattered under the pressure of rapt attention into a million little CrossFit conversations before finally congealing back into what any normal person might recognize as a house party. I’d like to tell you that I learned something from this couple or that they showed impeccable form, but I was over by the bar cringing with embarrassment, trying to drink all the vodka so I didn’t have to feel feelings anymore.

I struggle with moments of unintentional awkwardness, in real life and not. Take the famously awkward characters of the last 10 years—Michael Scott, Derek, Kenny Powers, Bruno and Borat—it’s rare I make it 10 minutes before I have to leave the room or do something else. It’s even worse with reality TV, candid camera shows or talk radio callers. I project a profound sense of humiliation onto them that I can feel in my teeth.

This party felt like the collision of all those things and I was bearing witness to it live and unfiltered. I wanted to run away with my hands over my ears yelling LA-LA-LA I’M NOT LISTENING! I’M NOT LISTENING! Even more, I was confused that no one felt the same way. They all seemed so comfortable with what was transpiring, with the make-believe and the language and the shorthand. What is wrong with you people, I thought to myself, you’re like a cult!

I luxuriated in that diagnosis for several months—they were a weirdo cult full of culty weirdos—as my CrossFit friends continued to get fitter and I just got fatter, or yo-yo’d or stayed the same. Depending on the season, my work and travel schedule, or the stickiness of my excuses, I went back and forth from being built like a linebacker to being shaped like a lineman. Say what you will about CrossFit, but if they were a cult, they sure were an effective one.

Around this same time, the CrossFit backlash began in earnest (and has continued ever since). The Internet’s professional complaining class even started using the F-word to describe it: fad. CrossFit wasn’t a regimen or a philosophy or a dynamic approach, it was a flash in the pan doomed to the dustbin of fitness history along with vibration belts, the Thighmaster, and 8-Minute Abs. It was a cultural fad the way that planking, Second Life, popped collars, and $8 cupcakes burned brightly in our consciousness only to fizzle out into nothingness as quickly as it arrived.

Initially I read these articles with great relish. See, I thought, I’m not the crazy one. But there is a world of difference between a fad and a cult. To call something a fad is to seek to diminish it, to gut it of substance until it’s nothing but an idea or an illusion. The goal is to diminish its value, its meaning and its impact so it doesn’t get too big for its parachute pants. By identifying something as a fad, you no longer have to worry or bother yourself with it. You can ignore it because it’s not like you’re missing anything—it will be gone soon enough. And usually, you’d be right. Just look at your wardrobe in pictures from high school and college if you want proof of that.

But CrossFit feels different. It feels like a cult.

To call something a cult is not to diminish, but rather to marginalize it. Cults are “those people over there” who believe all that crazy, cooky stuff—Hare Krishna, Branch Davidians, The Paleo Diet, Heaven’s Gate, Scientology, and now CrossFit. We call their ideas ‘dangerous’ or ‘fringe’ in order to scare away the unfamiliar and uninitiated, lest the fresh-eared and fresh-faced actually try to understand them. We marginalize them because, somewhere inside us, we know it isn’t going to be as simple as waiting for their bright shining star to fizzle out and disappear like a fad. We don’t even call them fads because fads don’t have staying power, and intuitively we recognize that these cults are going to be around awhile. The implication being, of course, that <gasp> there’s probably something to them.

It is this last point that draws so many people to cult-like movements while simultaneously repelling so many others. The question is: what is that ‘something’? Is it community? Health? Godliness? Spiritual connectedness? Fun? I suspect the answer is probably yes. But I also think, put more simply and more generally, the real answer is that it’s a real answer.

What these movements that we call cults provide to their practitioners and adherents is an answer to problems that have haunted them their whole lives. Obviously this can be incredibly dangerous when it comes to religion and existential dread (Jim Jones, Heaven’s Gate, Branch Davidians), but when it is related to more temporal concerns like health and fitness, it becomes something that can easily take over a party at midnight on a Saturday or dominate conversation at a 3-star Michelin restaurant.

When someone has struggled their entire adult life with issues of weight or flexibility or stamina or strength, and nothing they have tried has worked or produced the results they were after, then all of the sudden they find this new thing called CrossFit, and it’s not just a gym or regimen, but it’s a welcoming supportive environment of like-minded people who deliberately eschew fads for functional fitness, is it any surprise they don’t shut the fuck up about it when they meet people who have had the same experience or suffered the same troubles with no relief in sight?

They shout it from the rooftops, button-hole you at watercoolers, and corner you in bars. They have found an answer and they want to share it with you. They’re excited to share it, in fact. If that sounds like it could describe the evangelizing efforts of any number of cult-like groups, it’s not a mistake. This is the one thing all cults have in common: they’ve found a solution that really works.

In the last few months I have come to recognize and accept this about CrossFit. From behind the bar and inside the vodka bottle at my friend’s party, I called CrossFit a cult for the purposes of marginalizing it and rationalizing away my failure, yet again, to maintain my linebacker build through other means. In the sober light of day, however, CrossFit is still like a cult but for entirely different and perfectly understandable reasons. They have found an answer to full-body physical fitness and they want the whole world to know about it.

Now if only CrossFit girls would stop wearing those stupid knee socks, I might try it out. I mean, it’s soooo 2013. 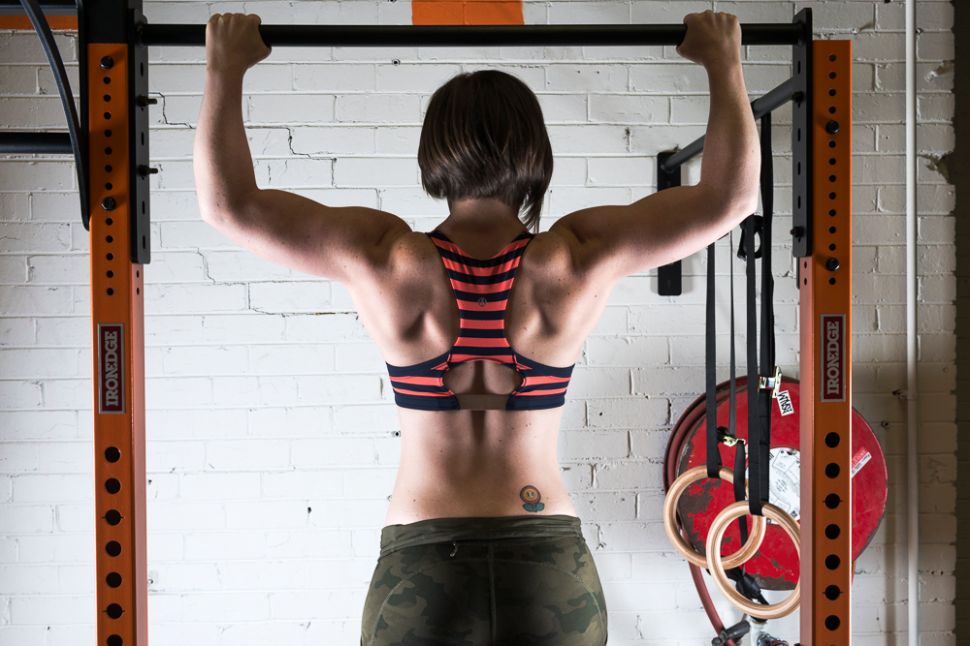