In a move to stem the tide of anorexia nervosa, France has proposed a new law barring too-thin models from walking and working. In the land of the butter croissant, an amendment was recently passed by France’s lower house of Parliament aimed at closing down pro-ana websites and advertising that “provokes prolonged dietary restrictions.” Additional measures place strident fines of up to €75,000 ($80,473.65), and prison sentences of up to six months on any modeling agents or fashion houses that employ an excessively thin model. The capital of couture joins Italy, Israel and Spain, which all have similar laws on the books.

I spoke with a model, let’s call her Lauren, who participated in Spanish Fashion Week shortly after their new “anti-skinny” law was passed. “I did Fashion Week in Spain after they enforced a similar law and agencies found a loophole. They gave us Spanx underwear to stuff with weighted sandbags so the thinnest of girls had a ‘healthy’ weight on the scales. I even saw them put weights in their hair,” said Lauren.

France has always been trend-forward. After creating age limitations, prohibiting models under the age of 16 from working, New York followed suit, establishing its own child model workplace regulations in 2013. America has yet to create national children’s rights legislation offering workplace protections for kids and teens other than those offered in the 1938 Fair Labor Standards Act. However, I hope that the U.S. does not follow this discriminatory and misguided new law. Canadian supermodel Coco Rocha has spoken out about being naturally thin and the body-shaming she has experienced because of it: “In my 10 years of living and working with models around the world, I’ve seen that the majority are not resorting to extreme or unhealthy means to keep their physique—they are simply naturally thin.” She goes on, “When I go to events and finish my plate, people often comment about how ‘amazed’ they are that I eat, as if I could live, work and keep up a crazy schedule traveling the world on zero calories a day.”

The scale of measurement is the Body Mass Index (BMI). This scale’s calculations are based solely on weight and height—excluded are age, sex and genetic body shape. At 16, when I was working as a fashion model, I weighed 115 pounds and was 5’7” 1/2. I exercised regularly and really loved to eat Subway veggie sandwiches and drink McDonald’s vanilla milkshakes. I was not anorexic or starving—I was definitely over-worked. I was simply a naturally thin teenager with a powerful teenage metabolic system.

My BMI back then was 18.0, which, according to the one-size-fits-all calculation, meant I was underweight.

There is an image problem in fashion. Thin and white is the unspoken rule. Couture’s stance, historically, is for everyone to stay out of their way and leave ART to “do how it do.” But “how it do” is to whitewash; 80 percent of models who walked this past NYFW were white, and over the past 10 years, girls in fashion magazines and on the runway have gotten thinner and younger than ever before. On the other hand, BMI is a flawed scale because it evaluates everyone’s bodies as exactly the same and measures based on that logic. And so the new law will only continue a tradition of discriminating against the individual in fashion, sorting everyone into mannequin-type categories.

Couture does need regulating. However, the legislators need to focus not on workers’ bodies, but on the workplace itself. Lauren had this to add: “Models’ bodies are already so harshly scrutinized, is it a solution to make it illegal to be underweight as a model? We all know that many girls are born skinny; it is natural. Why should they be made to feel wrong about it? It is shortsighted to think that simply forcing models to be a certain BMI will change the fashion industry. I think a better solution is to raise the age limit for models to 18. Many ultra-thin models are simply still going through puberty, and allowing their bodies to form before their career would be beneficial to all.”

I tip my hat to the French government for acting on the behalf of these young working professionals in trying to protect their health and safety. However, if they are to go to all this trouble in pointing out that there is a systemic health crisis happening within fashion, instead of placing restrictions on the bodies of young workers—the business of what a person does or does not do with her body is often problematic when put in the hands of government—why not look to the modeling agencies who freely act as employment agencies without the responsibilities of treating their client-models as working professionals?

Perhaps the crisis does not lie at the altar of the young people on display but on those behind the curtains. Much talk around the booking tables of modeling agencies focuses on which girls have gotten “big,” i.e. gained weight and lost work because of it, a.k.a. lost the bookers their commissions. For the entirety of her career supermodel Kate Upton has been body-shamed for being too “big.” Yet she has graced the cover of both the Sports Illustrated: Swimsuit Edition and Vogue and was named the first “Sexiest Woman Alive.” I was recently chatting with a colleague who worked at a top glossy magazine. She shared a story about a female celebrity scheduled to be photographed by the magazine, whose PR revealed she was a size 8. The fashion editor and editor-in-chief were appalled and wanted to drop the shoot. The pictures came in and the editors were merciless in their critique and brutal with Photoshopping. “It was a regular occurrence and young, impressionable models are around this kind of talk all the time from the adults who manage them,” said my colleague.

The abuse goes beyond the verbal and psychological for these young women. For example: In 1988, 60 Minutes interviewed over a dozen models who said they had been sexually assaulted by Karin’s Paris agency owner Jean-Luc Brunel and fellow agent Claude Haddad. Today, Mr. Brunel owns an 85 percent stake in New York/Miami/Tel Aviv-based agency MC2, a mid-list agency with worldwide branches that have or represent models such as Ginta Lapina, Liu Dan, Sessilee Lopez, Anastasia Lagune, Eve Doll and Alina Olegnova. In 2010, the Daily Beast reported a complaint filed by an alleged victim to the U.S. District Court for the Southern District of Florida stating that Jeffery Epstein, Jean-Luc Brunel and several others “deliberately engaged in a pattern of racketeering that involved luring minor children through MC2, mostly girls under the age of 17, to engage in sexual play for money.” When I reached out to CBS asking for a transcript of copy of the two-decades-old report they replied: “The transcript for the 60 Minutes broadcast from Dec. 18, 1988, titled American Models in Paris featuring Claude Haddad and Jeanluc Brunelle cannot be released as it is on legal hold.”

Then in 1999, Gerald Marie, the president of Elite Europe, was caught on camera in a BBC documentary propositioning a young model to have sex with him. And in March 2009, Bertrand Hennet, the chief executive of Elite World, was charged with buying and transporting cocaine. In 2012 Gerald Marie came on board the Paris branch of One Management, which, according to his biography, boasts that it manages over 100 models.

Instead of focusing on jailing folks for being a size 2, France’s efforts to understand anorexia may be better spent reexamining the culture that these young people are within. Perhaps they should reconsider allowing alleged (and caught on tape over 25 years ago) pedophiles and drug traffickers to run Parisian modeling agencies full of underage people.

Additionally, the French government’s use of the death of anorexia advocate Isabelle Caro, a 28-year-old French fashion model who struggled with the illness, is a misguided example. Actual model deaths and suicides are difficult to collate but there have been a few high-profile cases. However, the misrepresentation of models as chronically anorexic seems to be a mistake. If anything, the anecdotal evidence would suggest a high amount of mental illness in models. As proof of the pressure young models are under seems to support, we should not be questioning what the girls are or are not eating, but in fact what unregulated abuse is happening to them backstage. 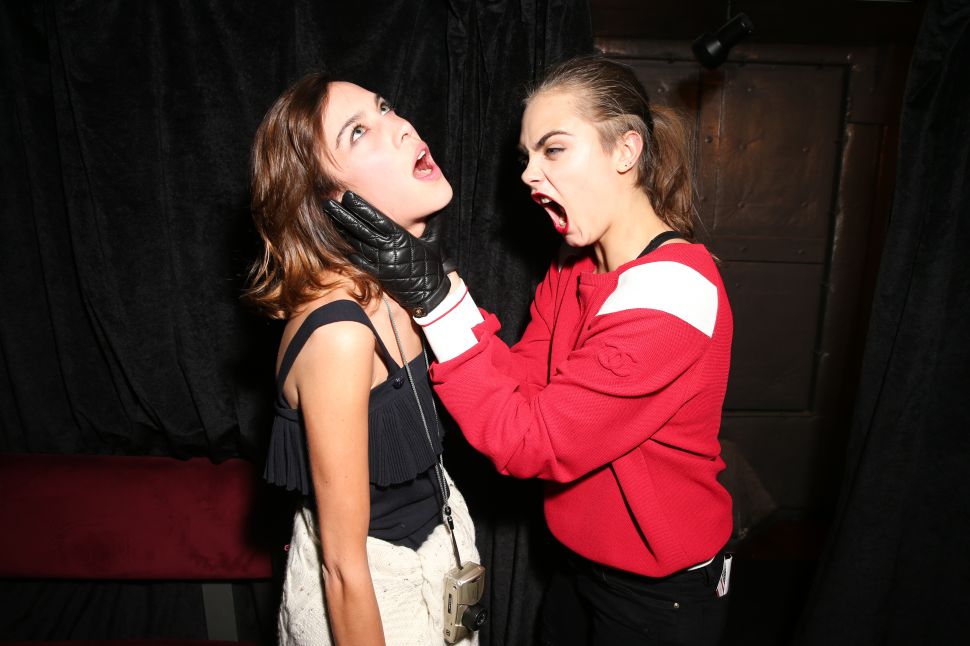