Screening: “Monir” at the Solomon R. Guggenheim Museum
In conjunction with the exhibition “Monir Shahroudy Farmanfarmaian: Infinite Possibility. Mirror Works and Drawings 1974-2014,” the museum is screening the 2014 documentary film Monir on the life of the fascinating 91-year-old Iranian artist. Directed by Bahman Kiarostami, the film traces the artist’s to and fro existence between Iran and New York, where she first came to study art in the 1940s and later befriended Willem de Kooning, Louise Nevelson, and Andy Warhol, and her distinctive method of constructing the dynamic mirror mosaics in the show.
Solomon R. Guggenheim Museum, 1071 5th Avenue, 1 p.m., free with museum admission

Opening: “The Menu for Mars Kitchen” at The Boiler
This show sounds so wacky that it could only be an art project, but it’s actually based on reality: NASA’s Mars Simulation site in Hawaii, where one of the programs was to develop food strategies for long duration space flight. Here, a creative crew designing the kitchen, greenhouses, and dehydrating station joins “Menu for Mars” initiators Heidi Neilson and Douglas Paulson. Dishes will be created, sampled, evaluated, documented and vacuum-packed. In the end, the prototype dishes and a summary of findings will be sent to NASA to augment its preparations for colonizing Mars. But can they top Milky Ways and Mars Bars?
The Boiler, 191 North 14th Street, Brooklyn, 7-9 p.m.

Performance: “A Performative Conference in Nine Acts” at The Aula
Challenging the concept of a conference, this program, which is part of the Ideas City Festival, uses spoken word, dance battles, hot-air balloon performances and immersive video and sound installations to tap the invisible undercurrents of urban life. A series of mostly short acts that end just before the break of dawn, this “conference” features such celebrated performers as Penny Arcade and Danny Hoch, along with the Bowery Poetry Club’s Bob Holman as the master of ceremonies. Come and go as you wish, or hunker down and leave a changed person!
The Aula, 268 Mulberry Street, 7:30 p.m.-3 a.m., $20

Launch Party: “Kristin Oppenheim’s White Rabbit” at Printed Matter
Trip back to the 1960s with artist Kristin Oppenheim’s vinyl recording of “White Rabbit,” the soundtrack for her theatrical light and sound installation that premiered at London’s Greengrassi gallery in March. Come for a drink and then pick up a limited edition of the 12-inch LP and have the artist sign the cool cover, which features artwork by Ms. Oppenheim and Don Maclean.
Printed Matter, 195 Tenth Avenue, 5-7 p.m.

Opening: “Robert Swain: Color Energy” at Minus Space
Minus Space inaugurates its new ground floor gallery in Dumbo with a solo show of large-scale geometric abstractions by the venerable Robert Swain. A master of color, Swain offers three new nine-by-nine-foot paintings that represent five decades of experimentation with how colors interact. Completely immersive, the paintings create a field of energy that keeps the eye in constant motion while casting a powerful aura. Don’t expect rainbows, but the experience might be worth what’s at the end of them!
Minus Space, 16 Main Street, 6-9pm

Opening: “Larissa Bates: Mama Lengua: Mother Tongue” at Monya Rowe Gallery
Exploring her personal history in relationship to American colonialism, Larrissa Bates presents a new series of intimate, narrative paintings about Costa Rica, where her mother was born. Having spent little time there, Bates constructs a surreal vision of life in the tropics, where bananas mixed with baseballs become symbolic of a country that has been exploited and forever changed. Her use of gold leaf suggests the reasons Spain conquered the new world and the icons of the religion it left, while illuminating the richness of the people that remain. Ms. Bates is a storyteller with a brush.
Monya Rowe Gallery, 34 Orchard Street, 6-8 p.m.

Screening: “Man with a Movie Camera” at Neue Galerie
In conjunction with the exhibition “Russian Modernism: Cross-Currents of German and Russian Art, 1907-1917,” the museum is screening two avant-garde films that were influenced by the art of this period: Sergei Eisenstein’s 1925 classic Battleship Potemkin and today’s selection, Dziga Vertov’s experimental, 1929 documentary Man with a Movie Camera. Made with no story and no actors, Vertov’s influential 68-minute film uses double exposure, fast and slow motion, split screens, Dutch angles, and extreme close-ups to present urban life in the Soviet cities of Kiev, Kharkov, Moscow, and Odessa. A silent film era gem, it speaks loudly to moviemakers and art-film lovers to this day.
Neue Galerie, 1048 Fifth Avenue, 4 p.m., free with museum admission

Opening: “Teresita Fernández: Fata Morgana” at Mad. Sq. Art
A 500-foot long sculpture in six sections that hovers high above viewers head in Madison Square Park, Teresita Fernández’s Fata Morgana is the most ambitious outdoor sculpture that either she or Mad. Sq. Art has ever undertaken. Creating a canopy of golden, mirror-polished discs that cast light and shadow on the pathways around the Park’s central Oval Lawn, the shimmering sculpture is immersive and transformative. It brings you into its reflective surface while magically integrating you into the surrounding realm, which is a historical part of New York City.
Madison Square Park, 23 Street and Fifth Avenue, private preview 5:30-7:30 p.m., open to the public at 7:30 p.m. 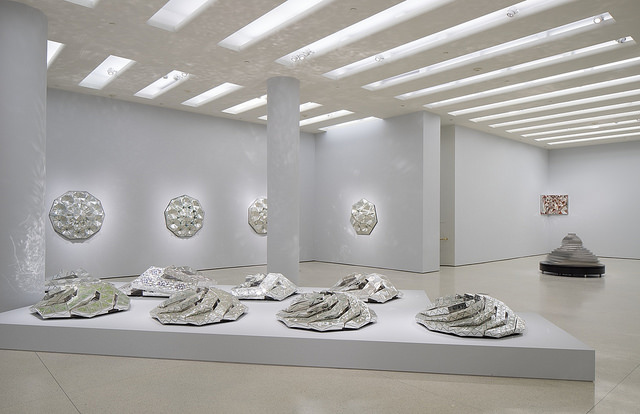