Powerful healthcare workers union 1199 SEIU slammed as fraudulent an email obtained by the Observer, purportedly from 1199’s political director Kevin Finnegan, that attacks the left-leaning Working Families Party and its candidate for Assembly in today’s special election—both of which 1199 SEIU supports.

The email, which was sent to at least one Brooklyn Democratic district leader from what appears to be Mr. Finnegan’s official union email account, has the subject line “WFP in Bed With Developers” and contains the image of an unpopular luxury development in the gentrifying Brooklyn district with the message “ON MAY 5TH VOTE AGAINST THE WORKING FAMILIES PARTY AND THEIR CANDIDATE DIANA RICHARDSON” stamped on it. Below, the message maintains there is a secret relationship between the WFP and the builder of the project, Hudson Companies, Inc.

“The founding members of the Working Families Party are affiliated with the Hudson Company, the developers who helped build the 626 Flatbush eyesore in Lefferts Gardens,” the email reads. “Skyrocketing rents and gentrification are pushing people like you and me out. Yet there are still greedy developers and groups like Working Families Party who want to build more and more like it. A Vote for Diana Richardson is a vote for greedy developers.” 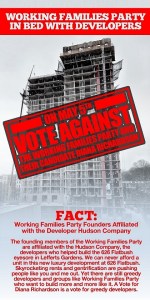 The image from the email (Photo: Screengrab)

A spokesman for the union, which has endorsed Ms. Richardson and is a key part of the labor alliance behind WFP, denied that the message came from Mr. Finnegan and said 1199 SEIU would push for a criminal investigation into the email. He noted that, unlike her opponents, Ms. Richardson has committed not to take campaign donations from developers.

“This fraudulent email is not only deeply unethical, but it is also a criminal act intended to deceive voters, and was not sent by Kevin Finnegan,” said spokesman David Bates. “It is disturbing that someone would try to criminally undermine the integrity of the electoral process, when generations have fought for the sacred right to vote.”

Mr. Bates added that the union’s members have launched a large get-out-the-vote phone and door operation for Ms. Richardson.

The email also includes a tagline at the very bottom attributing the message to “The Coalition to Protect Brooklyn,” based out of a post office box in Brownsville, which is not part of the Assembly district. The Observer could find no other record of the group’s existence.

Due to a series of bizarre paperwork snafus, the Democratic line is vacant today as voters head to the polls in the traditionally deep-blue district. Besides Ms. Richardson on the WFP line, the other Democrats in the race are district leaders Shirley Patterson, who is running on the Independence Party’s ballot row, and Geoffrey Davis on his own “Love Yourself” party line.

Development issues were a major concern at a recent debate held in the district, and Ms. Patterson has come under fire for taking large contributions from real estate interests.

The Observer could find no evidence of a direct relationship between Hudson Companies and the WFP, though the real estate developer does have ties to Mayor Bill de Blasio, an ally of the labor-backed party who received 1199 SEIU’s endorsement in his 2013 election.

The Assembly seat most recently belonged to Karim Camara, who stepped down to join the Cuomo administration earlier this year.