It’s been a long week—a long two weeks—for the art world, and we’re not done yet. Tonight, collectors turned out at Phillips for its Contemporary Art Evening sale, which totaled $97.2 million, coming in on the low end of the presale estimate, with 80 percent of the 70 lots on offer sold. Not bad for arguably the busiest auction week of the year. Still, the sale didn’t meet high expectations, and many of its star lots under achieved, or worse, were passed on.

And in the middle of it all, at the critical moment in the sale when Francis Bacon’s Seated Woman (1961) came up to the block and the entire room was hushed in anticipation, a Phillips employee taking bids by phone collapsed to the floor. In the moments after, there was hurried confusion as staffers came to her aid, and the sale powered through. The Bacon, which was guaranteed, hammered at $25 million and totaled at $28.2 million with the buyer’s premium.

Any momentum that had been building up to that point was on shaky ground after the incident. Even in the lead up to the Bacon, there were signs that others in the room may have been feeling the burn of the week, which Phillips chairman and CEO Edward Dolman echoed to the press after the sale, though he emphasized that the house was very pleased with the sale results anyway.

Danh Vo’s We the People (detail) (2011), one of two works by the artist in the sale, was passed on. Jean-Michel Basquiat’s Krong Thip (Torso) (1983), estimated between $4 million and $6 million also failed to sell. Other works passed no were Alexander Calder’s Janey Waney (intermediate maquette) (1969), estimated between $2-3 million, Fernand Leger’s Object dans l’espace (Objects in Space) (1931), estimated $2.5-3.5 million, and pieces by Cy Twombly, Robert Ryman, Takashi Murakami, and Tauba Auerbach.

However, big moments did come with the sale of Brice Marden’s Elements (Hydra) (1999-2000/2001), which sold for $9.24 million, just at the middle of its estimate. One of the artist’s more well-known paintings, Summer Table, is currently hanging in the Whitney’s inaugural exhibition “American Is Hard To See.” Mark Tansey’s stunning blue and white painting of an avalanche, Hedge (2011), sold for $5.65 million. And a golden Rudolf Stingel fetched $4.75 million and a nearly-all-white Agnes Martin totaled $4.2 million. Picasso’s big night on Monday at Christie’s earned his Buste de Mousquetaire the sixth top lot slot, selling at $2.7 million. But

The final lot, Jonas Wood’s B. Taschen (2010) far exceeded its expectations and sold for nearly double its high estimate at $305,000. After the dust settled, it was a pretty mixed bag of a night that ended up bringing still respectable results. 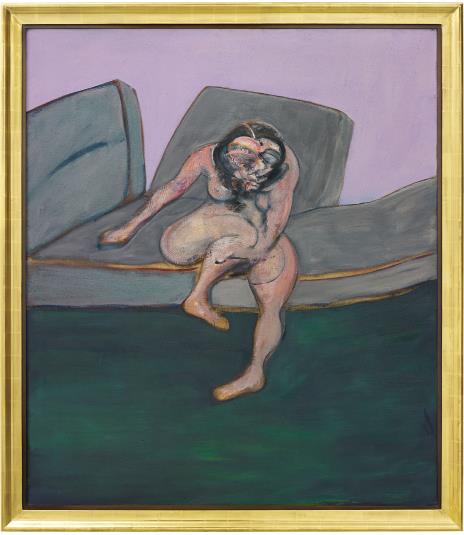