After nearly 30 years of attending opera in New York, I’m beginning to think there is an inverse relationship between the comfort level of the auditorium seating and the quality of the programming. This season I’ve sat through some perfectly mediocre performances in the plush seats of Lincoln Center, and last weekend I was transported by one of the year’s most intriguing presentations while writhing in discomfort in a plastic folding chair.

But the chairs, diminutive and crowded together, were the only thing wrong with Orlando, presented at WhiteboxLab Sound Lounge down on Broome Street Sunday April 26. The tiny, whitewashed gallery space was packed to the walls for this culmination of the second in a series of projects by the 29-year-old director/impresario R.B. Schlather.

For his ad hoc trilogy of Handel’s 18th-century operas based on Ariosto’s epic poem Orlando Furioso, Mr. Schlather first persuaded the gallery’s management to open its doors for all rehearsals, so that passers-by, casual or otherwise, could observe the process. (One such visitor was none other than Yoko Ono.)

Even at the performance proper, a laid-back feel was enhanced by the way the space was configured. Instead of placing the stage conventionally, at one end of the shoebox-shaped room with the audience in rows facing it, Mr. Schlather set the action on a narrow runway along one of the space’s long walls. The only decoration was a clunky wooden bench based on those you see on a New York subway platform. And, in fact, that’s exactly where the drama took place: not, as in the libretto for Handel’s opera, in a fairy tale medieval kingdom, but rather in a lonely underground station where no train ever arrived.

A motley group of 1970s downtown characters waited and peered down the tunnel: an uptight girl carrying a potted palm tree, a hip dude with an afro pick in his hair, a sozzled party girl and a seedy professorial type. They were Dorinda (soprano Anya Matanovic), in love with Medoro (countertenor Brennen Hall), who betrays her with Angelica (soprano Kiera Duffy), sending her lover Orlando (countertenor Drew Minter) over the edge.

Mr. Schlather’s version, which cut at least a third of Handel’s score, condensed the originally convoluted plot to a series of violent, disturbing trials for the unhinged Orlando, as devised by the mysterious Zoroastro. (As this wizard, bass-baritone Hadleigh Adams appeared in a dizzying variety of guises: from a menacing leatherman to a sleepy department store Santa.)

The staging put great physical demands on the singers, who climbed and crawled on, over, around and under the playing area. It is to Mr. Schlather’s immense credit that all this activity felt utterly organic. That even extended to the moment when Mr. Adams—peeled down to white body paint and bikini briefs as an alluring god of death—straddled the cowering Mr. Minter and drenched him in beer.

Mr. Minter, a star countertenor in the 1980s, remains an astonishing artist. The smaller venue and lowish tessitura of Orlando’s music brought out the best in the current state of his voice, its crinkly timbre suggestive of the hero’s fragility of mind. For his spectacular mad scene at the end of the second act, Mr. Minter cowered in a darkened corner of the set, his singing oscillating between searing power and a childlike delicacy.

Angelica is a flashy “bad girl” part with lots of virtuoso music, which Ms. Duffy dispatched exuberantly. Interestingly, though, she underplayed the glamour of the character, projecting instead an eerie lack of affect. In contrast, Ms. Matanovic built the ingenue Dorinda into an exemplar of female empowerment, flinging off her nerdy glasses and unfurling her pigtails as she vaulted the trills and scales of her final aria “Amor è qual vento.”

Young Mr. Hall—just three years out of Indiana University—is a dazzling find, with a complex, slightly smoky timbre and a confident legato. It seems almost unfair that he should be slim enough to wear a Day-Glo mesh T-shirt without embarrassment. Mr. Adams also filled out his costumes—or lack of them—most decoratively, and his dark lyric voice easily spanned Zoroastro’s vertiginous vocal leaps.

If there’s one word to sum up the whole Orlando experience, it’s “style.” Everything fit, everything worked together, everything gelled, from Paul Tate dePoo’s minimalist scenography to Terese Wadden’s witty costumes. Even the scrappy playing of the undersized orchestra distinctly conveyed conductor Geoffrey McDonald’s original and flexible musical imagination.

Earlier that afternoon, from the slightly less torturous armchairs of Brooklyn’s St. Ann’s warehouse another rapt audience took in the Wooster Group’s Early Shaker Spirituals. This performance piece wasn’t by any stretch of the imagination opera, even though it was almost entirely sung, but it shone a light on issues central to opera practice, or, for that matter, any type of performance.

The first section of the show featured a group of modestly dressed older women singing a series of songs from the Shaker religious tradition, modeling their performances on an old LP of this music they monitored via earpieces. The tunes were strophic and naive, and the presentation was pleasant, especially the opportunity of seeing the Wooster company’s director Elizabeth LeCompte in a performing role.

Then, in the last quarter hour or so of the piece, the women, joined by a group of younger men, reprised several of the songs, this time including the intricate and athletic dance movements the Shakers incorporated into their religious services. What seemed quaint and sweet when merely sung suddenly developed a sort of ecstatic muscularity when the dancing was added—or, rather, restored. These spirituals, one realized, were never intended to be heard as absolute music, but rather as one component of a richer art form amalgamating song and motion. The spirituals, then, as we first heard them, were incomplete—as incomplete as an opera aria sung out of its dramatic context.

In a way, then, Early Shaker Spirituals was precisely the right curtain raiser to Mr. Schlather’s Orlando, opening the mind to the infinite possibility of performance. For that kind of a revelation, a sore bottom is a very small price to pay. 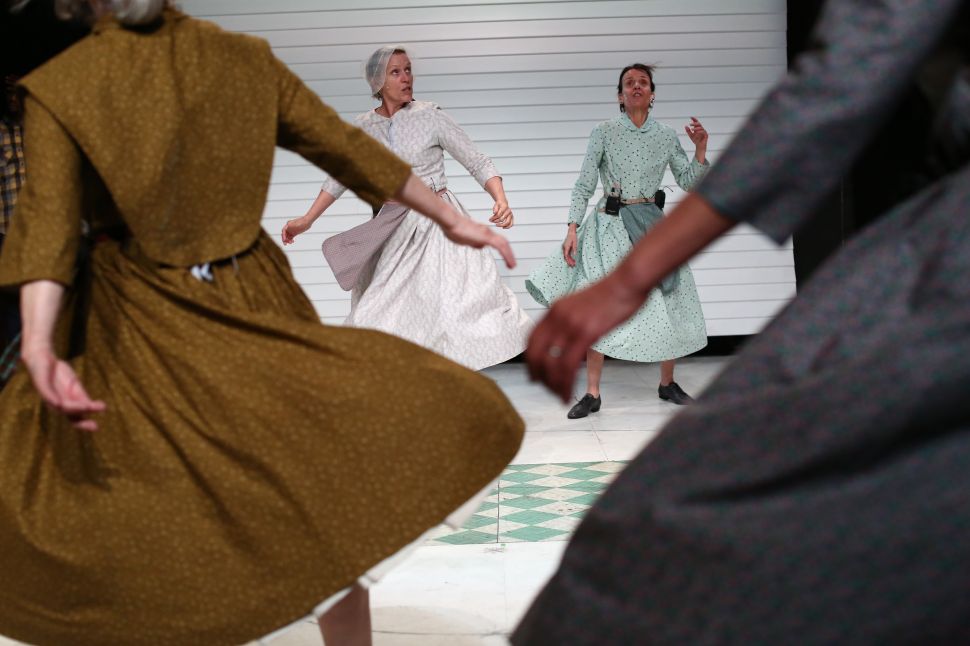