“Mr. Rovt has used the home,” Jason Haber, a broker with Warburg Realty, told the Observer recently, during a tour of fertilizer tycoon Alexander Rovt’s mansion at 232 East 63rd Street. “He’s taken meetings, entertained friends. But he’s never overnighted here.” Having acquired the property, which once belonged to Benihana founder Rocky Aoki, in 2005 for $4.7 million, Mr. Rovt set about demolishing the existing townhouse and erecting in its place a 12,000-square-foot throwback to the First French Empire done to the highest—or at least priciest—standards, a process that cost some five years and $18 million.

Still, that leaves quite a lot of time that Mr. Rovt, a Carpathian-born billionaire who got his professional start in the United States working at a kosher deli, might have been bedding down here. But when one owns a couple of dozen or so properties in the city—as Mr. Rovt does—deciding where to spend the night must surely become a distracting burden.

An arguably more pressing concern, however, is that since 2011, when the mulching magnate listed his creation for $27 million, he hasn’t been able to find anyone else interested in staying there either. Last year, in a kind of tycoon’s buy-one-get-one gambit, Mr. Rovt even offered to include his very own Rolls Royce Phantom in the sales price, which had by then been lowered to $25 million.

But at the $21.5 million for which the home is currently available—less than $2,000 per square foot—Mr. Haber, who re-listed it last month, thinks the place a good deal indeed. Nonetheless, he’s keeping his options open. “This is for a very particular buyer,” he said. “And the search is absolutely global.” Marketing materials have been printed in English, Mandarin, Arabic and Russian, distributed from Miami to Moscow.

Each set describes something very grand and perhaps equally odd—a pristine new construction that seems, aside from giant flat-screen televisions, a velvet-hung Art Deco-style screening room and glowing security monitors, to have been built according to the specifications of someone dearly attached to a degree of aristocratic pomp and circumstance that borders on farce. Here are ceilings in gold leaf and bathrooms in five shades of onyx, silken walls and hand-painted murals, a gorgeous subterranean pool and sauna with tiny Turkish bath-style tiles in a variety of blues, a painted row of exotic birds hanging by trapeze.

“We’re not selling this in the Midwest,” Mr. Haber germanely pointed out. “We’re dealing with the 1 percent of the 1 percent.” 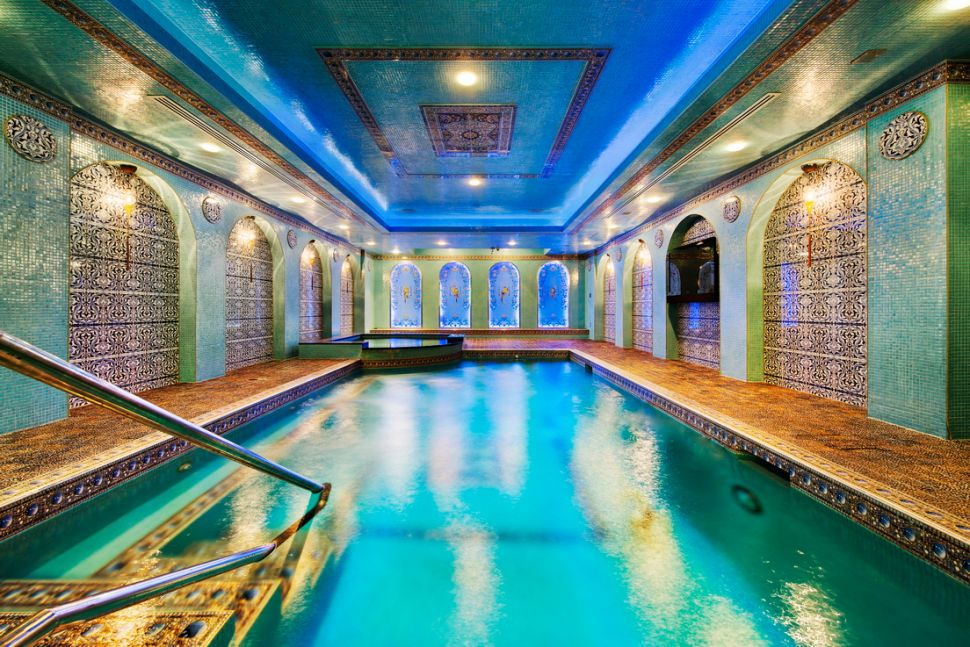