The last few weeks of the classical music season can feel like that twilight time between the last Fresh Direct delivery of the spring and the departure for the summer share. You make do with whatever’s in the back of the pantry until eventually you’re sitting down to a dinner of frozen Brussels sprouts and store-brand butterscotch sauce.

The tail end of the year at the Met is no exception: it’s mostly revivals of shows that ran earlier in the year or in previous seasons. Last week, though, two of those “leftovers” were upgrades to the originals.

The vaster improvement, night and day really, was in The Merry Widow. True, that could be read as faint praise, since last New Year’s Eve’s opening night of this Susan Stroman production proved putrid in every aspect. But even in absolute terms the revival of the Lehár operetta, which returned last Friday, was solidly entertaining, with particularly charming performances from the two romantic leads.

The title role, the wealthy and witty Hanna Glawari, is an interesting fit for mezzo Susan Graham. She’s hardly the arch European sophisticate usually seen in the part; in fact, her slight Southwestern twang and big-eyed double takes made the character seem refreshingly down to earth. She could almost have been playing Call Me Madam. As a matter of fact, Ms. Graham has terrific comic chops, actually winning laughs with the flaccid jokes supplied her by librettist Jeremy Sams.

More to the point, she was in superb voice, flitting elegantly through the waltz melody of Hanna’s entrance and delivering the second act “Vilia” song with the simplicity and dignity of a beloved folk song. If one could hear moonlight, the shimmering high A that crowned this number is what it would sound like.

She was well paired with baritone Rod Gilfry, returning to the Met for the first time since 2001, as the dashing Count Danilo. His virile baritone has a ding or two on it now, but his musicianship is undimmed: the zenith of the show was his hushed singing of the “Merry Widow Waltz” and Ms. Graham’s rapt, wary response. What is usually a frothy farce about mindless rich folks suddenly came into focus as a human drama of two middle-aged people wondering whether they could have a second chance at love.

As the flirtatious Baroness Valencienne and her boy toy Rosillon, soprano Andriana Chuchman and tenor Stephen Costello sang with big, full tone and a firm sense of the swooping, darting style of Lehár. Surprisingly, Ms. Chuchman even outdid the previous Valencienne, Broadway’s Kelli O’Hara, in the personality department: she’s got sparkle sufficient to carry a show by herself. Baritone Alan Opie’s firm voice made the character of Baron Zeta pop so much you wished he had better jokes than a leaden running gag of confusing the words “millions” and “melons.”

With all due respect to Ms. Graham, the absolute star of the night was conductor Fabio Luisi, who made Lehár’s melodies do more than just dance: he made them sigh with thwarted longing. As the lush strings of the Met orchestra launched into a waltz, Mr. Luisi would hesitate just ever so slightly over the first few notes, like a lover building up his courage before speaking what is in his heart. Mr. Luisi treats light music with the dignity others reserve for Bruckner or Mahler. Yes, it’s still entertaining, but this is entertainment you continue to ponder long after you’ve left the theater.

In contrast to Widow’s many changes, the previous evening’s revival of Verdi’s Un Ballo in Maschera reassembled most of the “original cast” who appeared two seasons ago at the premiere of this slickly creepy David Alden production. As the erring wife Amelia, soprano Sondra Radvanovsky has added some subtle detail to her powerhouse singing, and her acting in this melodramatic part remains vivid.

Baritone Dmitri Hvorostovsky’s flinty tone and cold intensity were only slightly softened this time around, mostly through a few moments of unfocused acting in the first scenes. Dolora Zajick boomed and wailed at the spectacular extremes of her superhuman mezzo-soprano as the spiritualist Ulrica. If Heidi Stober’s soprano as the bratty page Oscar lacked ideal brilliance, she really threw herself into Mr. Alden’s tough punk take on the character.

New to the cast was Piotr Beczala as Gustavo, his bright, agile tenor suggesting the King’s mischievous personality. His is a lyric voice, but he sang the big moments of the role, the passionate second act love duet and his third act aria of remorse, with astonishing power and stamina, arriving at the assassination scene with plenty in reserve. Here his acting was particularly striking: the mortally wounded King seemed not so much terrified or angry as puzzled, like a clever but petulant child.

A couple of the excesses of Mr. Alden’s production were toned down for this reprise. For instance, the King’s enemies Ribbing and Horn no longer lurched about like zombies. Otherwise, this elegantly spare take on Verdi’s serio-comic opera seemed delightfully to hover on the cusp between reality and dream.

There’s a giant flaw in this revival, though, and sad to say it’s James Levine’s conducting. His leadership, which for decades set the standard in technical precision, was on this occasion noticeably sloppy, throwing orchestra and singers out of tempo constantly. The gorgeous second act love duet collapsed into a jumble of fragmentary phrases, and more than once he left Ms. Radvanovsky gasping for breath at the end of a long line.

Mr. Levine might not have sounded quite so ungainly had we not Yannick Nézet-Séguin’s exquisite conducting of Don Carlo from last month still in our ears. The contrast between the two amounted to the difference between prose and poetry. As the season closes, maybe it’s time to start thinking of the Met’s future… and when its past will be allowed to take its place out of the spotlight. 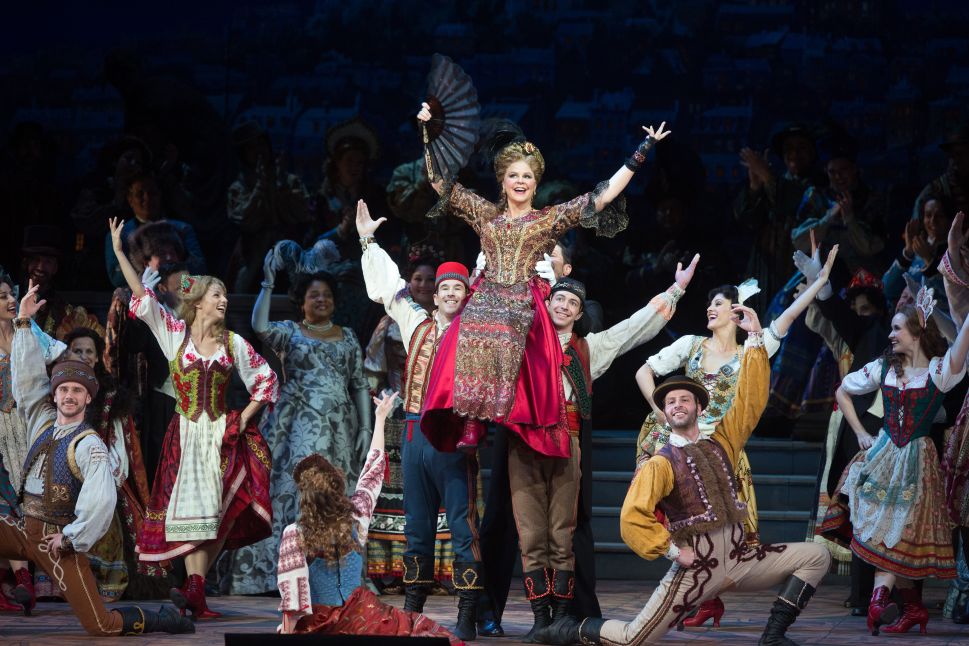