Mayor Bill de Blasio called the scandal that has engulfed former State Senate Majority Leader Dean Skelos a “sad moment” for Albany, but vowed to continue campaigning for financial assistance for the city from the Republican-run State Senate.

The mayor spoke on the subject at an unrelated event just a short while before Mr. Skelos resigned as head of the majority GOP conference, but after reports had surfaced over the weekend that he would step down from his vaunted position atop the body today. The once-mighty Republican faces federal allegations that he used his position to pressure a developer to obtain a no-show job for his son, Adam Skelos, at a filtration systems company—and then leaned on his native Nassau County to grant said company contracts.

The mayor said he would continue to lobby the often hostile Republican majority, reportedly now under the leadership of Long Island Republican State Senator John Flanagan, for funds for the city in the waning days of the legislative session.

“Right now we’re focused on getting what we can get done over the next six, seven weeks in Albany, for the people of New York City,” he said.

Mr. de Blasio, a liberal Democrat, dedicated substantial resources to the State Senate Democrats’ failed effort to capture the upper house of the legislature last year—which became fodder for Republican attack ads. As a result, he faced an icy reception in Albany from Mr. Skelos’ triumphant GOP majority this year.

The Republicans enjoy only the narrowest of numerical majorities in the State Senate—32 out of 63 seats—but conservative Brooklyn Democrat Simcha Felder caucuses with them, and their control is further fortified by a “co-leadership” arrangement with the five-member Independent Democratic Conference led by Bronx State Senator Jeffrey Klein. Deputy Majority Leader Tom Libous—who is under indictment for lying to federal agents—is currently convalescing from cancer surgery, leaving the GOP in a seemingly vulnerable spot.

Mr. de Blasio, however, would not call upon the State Senate Democrats to attempt a parliamentary coup to obtain control of the body.

“They understand their circumstance better than I do,” he told the Observer. “I think the State Senate Democrats are handling the situation as best they can right now.”

Instead, he turned a somewhat hopeful eye toward 2016, when many anticipate the Democrats will ride elevated voter turnout in the presidential election and take the majority in the State Senate.

“The future? Obviously there will be an election next year that will determine the fate,” he said. 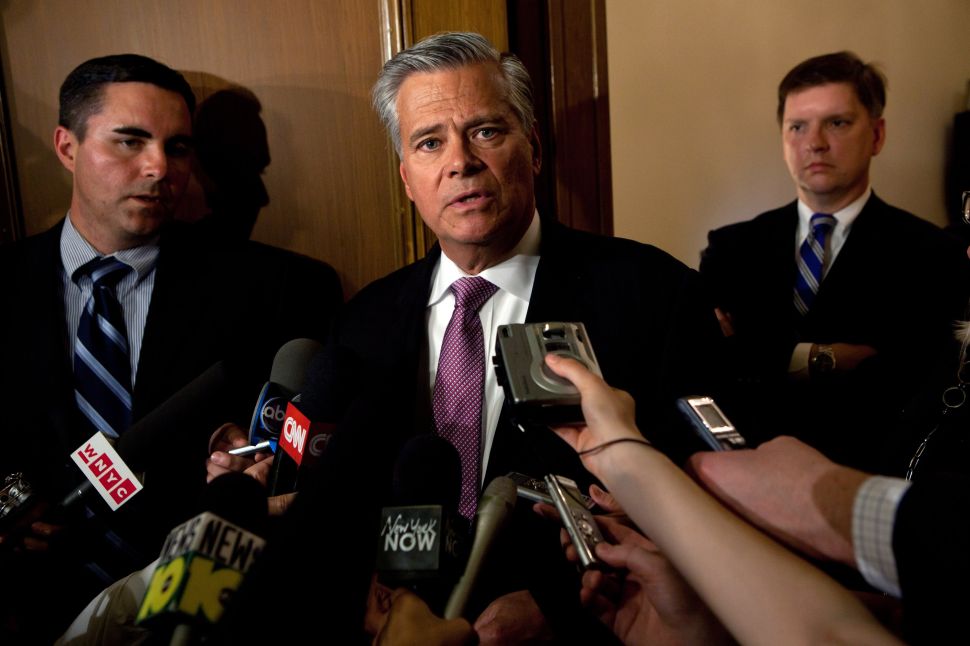