A few dozen tenant activists demonstrated outside the Midtown offices of Gov. Andrew Cuomo, calling for stronger protections for residents in New York City’s rent-regulated housing stock and criticizing comments the governor made last month suggesting Albany was too engulfed in scandal to push for serious changes to the state’s policies toward developers.

Armed with homemade signs and chants like “hey, hey, Governor Gentrification has got to go,” the Alliance for Tenant Power—a coalition of left-leaning groups like Make the Road, the Crown Heights Tenant Union, the Metropolitan Council on Housing and Tenants and Neighbors—delivered a letter protesting Mr. Cuomo’s remarks at an Alliance for a Better New York breakfast in April. Mr. Cuomo there called for the extension of the city’s rent regulations when they expire in June, but argued that the federal corruption allegations against Assembly Speaker Sheldon Silver and State Senate Majority Leader Dean Skelos had made the capital too chaotic to attempt revising the statutes or changing tax breaks given to developers like the controversial 421a.

“We write to express our outrage over your recent comments that displayed, at best, indifference to New Yorkers who are struggling to pay their rent in rent-regulated apartments. Low- and moderate-income tenants who live in more than 1 million rent-regulated apartments are at a breaking point because of the failure of leadership in Albany,” the letter said, before attacking the governor for not taking a stronger stand on the provisions when they last came up for renewal in 2011. “On your watch, the housing affordability crisis has grown dramatically: entire neighborhoods have been turned into gilded enclaves that cater primarily to infamously wealthy real-estate donors.”

Advocates in the street afterward said they felt the accusations against Mr. Silver and Mr. Skelos, which assert that both the legislative leaders allegedly took bribes and kickbacks from developers in exchange for tax breaks, added urgency to the call for a tougher attitude toward the real estate industry—almost the opposite of what Mr. Cuomo alleged.

“What it says to me is that the corruption in Albany is about to be exposed, and I think on both sides of the aisle you have a lot of people who are scared because of these investigations,” said Crown Heights Tenants Union organizer Esteban Giron. “For us, it just reinforces what we thought, which is ‘why haven’t the lawmakers been pushing for these things which are clearly what their constituents want?’ And we have a good answer for that now.”

The advocates said they wanted the governor to instead push for the repeal of 421a, for the limiting of rent increases for major capital improvements to a relatively short period of time and for an end to decontrol and legal price increases on rent-controlled and rent-stabilized apartments that become untenanted.

“He can’t just continue business as usual. It’s just totally unacceptable, the position he’s staked out so far, that he wants to just continue the rent laws as is,” said Ava Farkas, executive director of the Metropolitan Council on Housing. “The rent laws are broken. People are being evicted every day.”

Mr. Cuomo’s office would not commit to any of the protester’s goals, but argued that he has long fought for creating and maintaining housing for all New Yorkers and would do so in the fight over the regulations in June.

“Governor Cuomo has spent his entire career in public service focused on expanding affordable housing to ensure that everyone has a safe, decent, place to live,” a spokesman said. “This administration has made a deep, long-term and unprecedented commitment to housing affordability in New York. The governor will continue that fight in the weeks ahead.”

Read the full text of the letter below:

The rent regulation system in New York City, Nassau, Westchester and Rockland counties is broken. We have lost hundreds of thousands of units of affordable housing since Albany began its deregulation effort, and the pace has only increased in recent years.

In 2011, you and the state Legislature had the opportunity to close many of the loopholes that landlords continue to exploit at the expense of New York tenants. That did not happen, and as a result, rent-regulated tenants face persistent harassment today.

Unsurprisingly, it does not appear that this was a decision made on the merits. In January, the Speaker of the Assembly was arrested on corruption charges. It is now Dean Skelos, the Senate president, who is facing similar accusations.

In both cases, according to the indictments, real estate developers used their wealth to secure tax giveaways and prevent the Legislature from strengthening the rent laws.

That is why we are so concerned with your recent comments, which did nothing more than state REBNY’s preferred positions: no strengthening of the rent laws and continuing the 421a tax abatement program. The millions of tenants struggling to pay their rent each month cannot afford the results of another round of negotiations tainted with real estate influence.

The current rent laws will expire June 15, and we hope you didn’t forget that many rent-regulated New Yorkers voted for you in 2010 and again in 2014.
On your watch, the housing affordability crisis has grown dramatically: entire neighborhoods have been turned into gilded enclaves that cater primarily to infamously wealthy real-estate donors.

We are marching to your New York City office today to demand you publicly support the repeal of vacancy decontrol and other loopholes favored by developers at the expense of tenants.

Rent-regulated housing is the largest source of affordable housing for low-income and moderate-income New Yorkers.

Extending the rent laws in their current form is unacceptable; it would be both a massive giveaway to landlords and enable them to deregulate more apartments and harm more New Yorkers.

The only responsible decision is to strengthen the rent laws and repeal vacancy decontrol.

The clock is ticking, and we will hold you accountable for what happens on June 15. 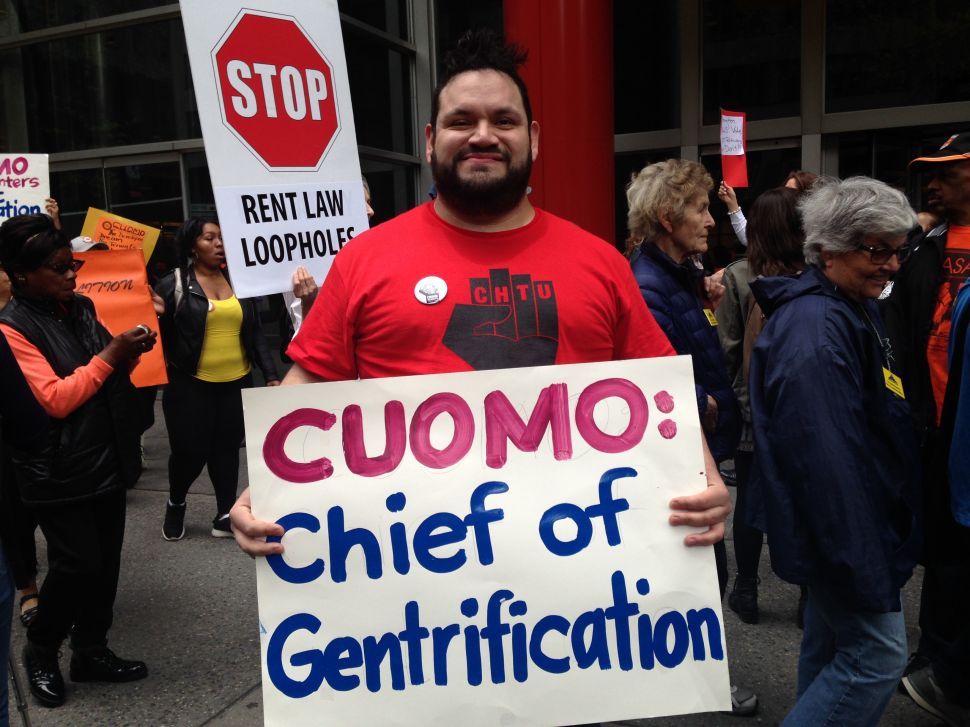