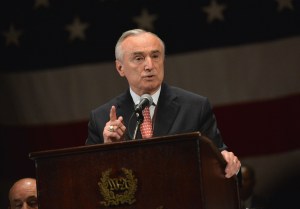 NYPD Commissioner Bill Bratton admitted at the City Council Budget Testimony Thursday he will not pursue his campaign to get an extra 1000 police officers. Mr. Bratton has faced opposition from Mayor de Blasio over the increase in police numbers in recent months, even though he’s retained support from the Council. Mr. Bratton also faced a barrage of verbal abuse at the City Council budget testimony when a protester reportedly called him a “racist” and a “son of a bitch,” according to one Observer reporter present at the hearing, who tweeted out the comments. (Observer)

A 30-year-old Argentinian woman became the first person to stand-up paddleboard around Long Island. Returning to the Manhattan shoreline Tuesday night, Julieta Gismondi paddled 300 miles—30 miles a day since May 9. Ms. Gismondi slept on beaches and survived on freeze-dried bags of food and snacks. (DNAinfo)

A Queens U.S. postal worker has been charged after she allegedly threw away approximately 2,000 mail items. Norberto Cintron, who works for the 20-920 Jamaica Avenue post office, is facing federal charges for allegedly either trashing or failing to deliever mail to it’s appropriate address. (NBC New York)

The executive director of the Historic Districts Council had some choice words to explain why the HDC rejected Aby Rosen’s plan to redesign the Four Seasons restaurant. Simeon Bankoff wrote on his personal Facebook calling people like Mr. Rosen “are oppressors and should curl up and die.” Mr. Bankoff admitted his statements did not reflect those of the HDC which made their rejection of the plans a little more civil stating the plans would be a danger to “an iconic space and Modernist treasure.” (New York Post)

Hundreds of volunteers reached out to nail salon workers across the city Thursday, in a bid to promote healthy workplaces and protect the manicurists’ rights. The outreach campaign, initiated by the City, comes after The New York Times investigation exposed the exploitation of nail salon workers. The “Nail Salon Day of Action” spans all five suburbs in the hope to visit up to 1,000 nail salons. (New York Times)