It won’t come as a revelation that the owner of the horse that might notch a rare Triple Crown next month enjoys placing a wager or two. But perhaps more surprising is the growing list of people from the gambling industry who accuse Ahmed Zayat of welching on debts.

Last week, a Florida man named Howard Rubinsky—who himself has been convicted of gambling related felonies—sued Mr. Zayat, saying that in the early aughts, he arranged credit for Mr. Zayat of almost $2 million in offshore casinos and that Mr. Zayat left him holding the bag. Mr. Zayat completely denies the charges, both on the facts (there appears to be no written evidence that he ever owed Mr. Rubinsky) and also points to the 6-year statute of limitations having long passed on the debt.

It is worth noting that the suit suddenly appeared just after American Pharoah had won the Kentucky Derby and Preakness and will try for the first Triple Crown in 37 years at the Belmont Stakes next month. In an interview with the Observer, Mr. Zayat pointed to the timing of the lawsuit as an effort by a dubious felon to capitalize on the sudden high profile of a longtime breeder.

“These (accusations) are fraud. I’m a victim of it. Anybody who has half a brain can read through it and say there’s no way somebody of my caliber would owe somebody money from 2003, 12 years almost ago.” He completely denies placing any bets of any kind through Mr. Rubinsky, telling the Observer, “He’s talking about me betting overseas in Costa Rica. I’ve never in my life been in Costa Rica. A casino line of credit, like it’s a fiction. I haven’t even been in the business. In other words, I started Zayat Stables in 2006 or 2005. He’s talking 2003. I was in Egypt, as CEO of a beverages company. I was working 18 hours a day. It’s an insanity. Nothing adds up.”

The Observer has now spoken to two additional gambling industry figures who accuse Mr. Zayat of fiscal treachery, and their assessment is buttressed by documents about the owner of the sensitive and crowd-shy brown-eyed beauty whose misspelled name has helped win him a place in America’s heart.

Angus Hamilton loves to be called “The Gambling Globetrotter,” and comes by the nickname with some justification, having co-founded the Sporting Index, which specializes in spread betting and dominates the market in the UK. He currently appears as a correspondent on a New Zealand radio broadcast.

According to Mr. Hamilton, Mr. Rubinsky was “the middle man between Mr. Zayat and the various places where he placed wagers and they were all offshore. Now some of this is documented, the problems he had in New Jersey, but the other stuff, the other activities or transactions or bets were placed with offshore books. … Zayat is the player. He is the wagerer. He is the punter,” he continued, using British slang for bettor. “Howie would find places for Mr. Zayat to wager. So for example he bet with a company called Pinnacle Sports, who at that time were the biggest company in the U.S. offshore gaming industry. … Now Mr. Zayat has obviously always enjoyed a flutter [wager] and basically ended up playing with several of these offshore sports books, and it’s well known in the industry that he still owes quite a few sports books quite a bit of money, including the one that appeared in the editorials or in the articles of Trade Winds and Costa Rica. But it’s well known and because I was involved in the industry, or I am involved in the industry that he still owes quite a bit of money around the place.”

Mr. Hamilton seems to be taking this more personally than just someone looking on from the sidelines. He even took the time to establish a Zayat-bashing website. Asked why he cares enough to go to the trouble, Mr. Hamilton characterizes his interest as that of an industry watchdog. “[Zayat] doesn’t owe me any money. I’m not coming from an angle… I was slightly surprised to see the website in his name was available and I thought to myself this is quite interesting, because at some stage in one’s life you’ve got to take a stand. In a way it’s a moral stand. I think you’re going to be looking at figures with several million dollars.”

Chris Costigan is the Founder of Gambling911.com, which is the closest thing the player side of the betting business has to a reliable trade publication (as opposed to the gaming business, which has plenty of legitimate coverage, including analysts at the major banks). Like Mr. Zayat, Mr. Costigan is a Jersey guy, though he is now living in Miami Beach. He told the Observer, “I’m hearing from more than one person that this guy Zayat owes a lot of debts. I’ve been dealing with these guys since ’97 and I know them really well, and they don’t talk to a lot of people so they are pretty much telling me, ‘Look, Chris, this guy owes us a lot of money.'” Mr. Costigan was under the impression that Mr. Zayat had been betting not just on horses but on sports. “I want to say sports but don’t hold me to it. I’m not 100% sure.”

Mr. Zayat denies that, telling the Observer, “I have never in my life bet on sports. I only bet on horses. I take that back, I once bet on the Super Bowl.” As for the case Mr. Rubinsky has brought, Mr. Zayat is unequivocal. “We asked for a summary judgment. It’s meritless, to be thrown out. It’s garbage. It’s rubbish. I can’t tell people what not to write, but anybody with half a brain can see through this. There’s not a single – single – single, anything of evidence in this. There is no contract. No conversation. No proof. It’s an absolute fiction.”

Meanwhile, other signs of incomplete honesty have cropped up regarding Mr. Zayat. The Bergen Record reported in 2013 that Zayat Stables removed mention of Mr. Zayat having attended Harvard Business School from its website after inquiries from the paper. An MBA from Harvard was also cited by many publications plus the National Thoroughbred Racing Association and the annual report for Mr. Zayat’s beverage company, the government-owned beer company, Al Ahram Beverages Co., Mr. Zayat’s company took private in a big Middle East success story.

A lawyer for Mr. Zayat, Joseph Zann, told the Record, “Unfortunately, early in his career there was misinformation reported about Mr. Zayat’s education … These erroneous reports were not corrected and were repeated by other outlets.” According to the Record, “Harvard’s business school told The Record this week that it has no record of Zayat’s attending the school.”

But even after the removal of the Harvard reference from his website and the lawyer’s attribution of the puffery to “an outside consultant,” Mr. Zayat himself could not resist dropping the Crimson name. In May 2014, a year after removing the Harvard reference from his own website, Mr. Zayat gave a sworn deposition in conjunction with the lawsuit. Here’s a telling chunk:

Q: Did you attend a college or university of higher education, in other words, something beyond high school?

Q: Where did you attend?

Oddly enough, this reporter has some personal experience with Mr. Zayat that revealed a very charming but perhaps less-than-forthright counterparty.

In 2007, I was working on Rudy Giuliani’s presidential campaign. Tasked with finding hosts for fundraisers in New Jersey, I was introduced to Mr. Zayat, who was happy to volunteer. We chatted several times and I remember remarking on how unusual it was to encounter an Orthodox Jew who was also an Egyptian named Ahmed. Mr. Zayat laughed and told me that it helped him in his beverage business. I cannot recall the precise quote but it was something to the effect of, “When I deal with Jewish customers, I’m Ephraim from Englewood; when I deal with Arab customers, I’m Ahmed from Egypt.” 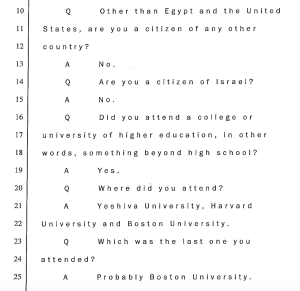 I took it as the funny and innocuous reply of a born salesman, but several weeks later the fundraiser was suddenly canceled when the campaign’s strict vetting committee wouldn’t clear the host for reasons that are lost to history. Jeff Berkowitz, who headed the research team that disqualified Mr. Zayat, could not recall the precise reasons it was determined that the mayor’s campaign could be hurt by the association and neither can I.

In a footnote to that story, with just a few weeks before the planned event and thousands of dollars already in hand, I scrambled to find an alternative host. A friend and Rudy supporter named Mark Gerson introduced me to a rabbi and television personality named Shmuley Boteach, who winded up hosting the packed event at his Englewood home and raising more than $100,000. Rabbi Shmuley is now a columnist at the Observer.

Mr. Rubinsky blasted Mr. Zayat for his many alleged crimes and misdemeanors. In a sprawling statement shared with the Observer, he said, “I live in a world where a man’s word is his bond, and the truth matters. I pled guilty to being involved in illegal gambling 7 years ago, yet I am held responsible for the 7-figure gambling debt incurred by Ahmed Zayat. Ahmed Zayat is a liar, his past and current history indicates he has no moral compass when it comes to telling the truth or taking responsibility for his actions, all the while scapegoating others. Ahmed Zayat has lied about having a Harvard degree, bounced checks to the State of New Jersey after blaming them for his gambling debt, blamed a bank he owed millions of dollars to for supposedly misleading him – and he even blamed the jockey club for the misspelling of his prize horse, American Pharoah.” 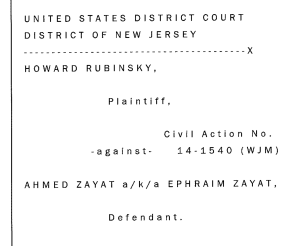 For his part, the man who brought the gorgeous American Thoroughbred into the popular consciousness fired back with equal ferociousness, categorically denying the charges and indicating that there are bigger forces behind the convicted felon who is now accusing him. “It’s an absolute fiction. It’s a scam from A to Z. It’s a total absolute scam and I respect you by the way. I like you, but you don’t know this, this is part of a bigger thing. I won’t tell you more than that, but I am ready here to lash big-time because this is part of an orchestrated defamation of character of mine that … It’s going to be a big big story coming out. This is an orchestrated effort. There is something behind it. I can’t tell you more than that. I can comment to you that this is an absolute sad despicable act of desperate people.”

The Belmont Stakes on June 6 represents an opportunity for American Pharoah to become the first triple crown winner since Affirmed accomplished the feat in 1978. But with accusations of resume padding, bad debts, and even poor spelling, the sport of kings is starting to look a tad less royal. 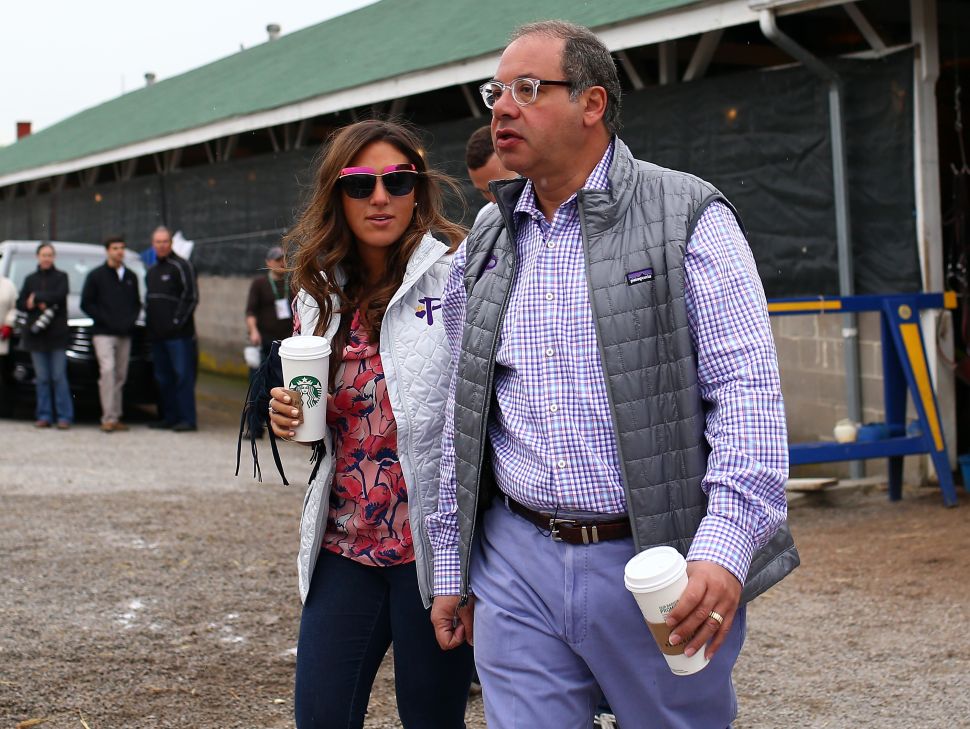