Last night outside the PEN American Center’s literary gala at the American Museum of Natural History, which was guarded by a phalanx of armed police men, Vicki Rovere stood holding a poster that read: “Free speech does not deserve death/Abusive speech does not deserve an award.” She was protesting PEN’s decision to honor the French satirical magazine Charlie Hebdo for “freedom of expression courage.”

But Ms. Rovere, 71, was the only one picketing the event, which came as a surprise, given the intense debate surrounding the gala. Several PEN members, including Teju Cole and Francine Prose, were boycotting the dinner because they deemed Charlie Hebdo‘s content Islamophobic, which had triggered heated exchanges—online, at least—on the subject of free speech. (Perhaps writers just don’t like to go outside.)

Ms. Rovere, the author of Where to Go: A Guide to Manhattan’s Toilets, has been involved in a number of demonstrations and is something of a New York character. She lives on the Lower East Side and describes herself as an “environmental scavenger”; she likes to collect found items from around the city and then give them away for free. As the cocktail reception in the Theodore Roosevelt Rotunda ended and the literary types attending the event—including Salman Rushdie, Robert Caro, Adam Gopnik and Martin Amis—went down to dinner, I made my way outside and asked Ms. Rovere what moved her to show up in the first place.

Why are you protesting?

Let’s see, where should I start? PEN International, the writers’ group, is having a gala here tonight, to give three free speech awards, one of them to Charlie Hebdo, which is the French satirical magazine that got massacred several months ago. Six writers have objected to their being given the award and have pulled out.

Oh wow, fabulous! Anyway, so I disagree with them being given the award, too, so I came out to support them.

Have you met any criticism from people coming in?

I’ve had some great conversations—not with people going in but with people passing by. One guy was sort of like, Well, what they did was so terrible, how does it balance out?

The terrorists or the artists?

The terrorists. They’re basically discussing the basic issue behind this. But I met a number of people who said they did agree with me. One of them took a button. I had made these buttons shortly after the massacre saying “Je ne suis pas Charlie,” because the slogan was “Je suis Charlie.” I made a variety of buttons, but I didn’t sell any.

Have you sold buttons at other demonstrations?

Yeah, I’m a pacifist, so I’ve been active in the movement since my teenage years.

So you’re a pacifist, but you are against honoring cartoonists who were killed?

I certainly didn’t support the killers. That is not my point. My point is, in general, if we would respect other people’s beliefs, even if we don’t agree with them—and I’m an atheist; I mean, I don’t get religion at all—but I understand this is an issue for Muslims, and when you have these caricatures of the prophet Muhammad, you’re insulting a hell of a lot of people who would never lift a finger against you.

But just to play devil’s advocate, do you think that you truly understand French satire?

I understand French culture is very different from most other cultures. I actually majored in French.

So were you a reader of Charlie Hebdo?

No, I had actually seen their precursor, probably in the ’70s, which was a paper called Le Canard Enchaîné, which means “the unchained duck,” as far as a I know. French attitude toward religion in public is different from ours.

Yeah, so they just have a very different approach to a lot of issues than we do. I mean, there are plenty of people here who think it’s O.K. to insult—Pamela Geller, the folks in Texas who held this caricature of the—

I don’t know if I would characterize that as being in their hearts, but I think the effect of it was racist.

Are you aware that one of the twelve people who was killed was a 60-year-old, Algerian-born copy editor named Mustapha Ourrad, who had a Muslim background?

Because I don’t agree with you, and I think that Charlie Hebdo had every right to publish whatever they wanted to.

Well, I had one guy who actually was going into the event, and he said that he disagreed with me, and that people should be able to say whatever they think. And I said, are you familiar with the PATRIOT Act?

Oh yeah, but this is France we’re talking about.

Well, I think the PATRIOT Act is unconstitutional.

Yay, we agree on something!

But it’s confusing to me that people should take the side of “this shouldn’t have been published” when 12 people were murdered for publishing cartoons. That’s what it comes down to. And I guess I understand the notion to not necessarily want to honor what you deem coarse humor—

But have you seen Le Monde’s study, which looked at the history of Charlie Hebdo’s cover stories and noted how rarely it actually took on Islam?

I know they have attacked other religions, too. But it is, from my understanding, part of Muslim theology that no human being should be depicted, and especially the prophet.

Sure, but who cares?

Well, if you’re going to live in a world with people it might be helpful—

But does that mean that 12 people should be killed because they broke the strictures of a religion?

Come on! Are we back in kindergarten?

No, we’re in the real world right now.

I agree with the top.

Well, I’ll tell you a story. During the war in the Balkans, the Serbs got very upset about something the radio station WNYC had said, so they went down to City Hall to protest. There was another group that wanted to support the NATO bombing of the bridge that had just killed a whole bunch of people. So I went down with a third position, saying I don’t agree with you, I don’t agree with you, and the cops didn’t know what to do with me. They finally put me in the reporter’s pen because there wasn’t anybody else there. But anyway, that’s probably just my temperament, which is not to take sides, but to see the value in both sides.

So what’s your side here?

I can see why people feel that strongly that they think it’s O.K. to insult people. But I also see that people in the throes of their religious conviction cannot tolerate it, especially if they may be a little unbalanced to start with they might tend to be violent.

But you’re an atheist. Shouldn’t you not care?

You must have been alive when the Nazis wanted to march in Skokie. What did you think of that?

I supported the ACLU position to allow the Nazis to march.

So don’t you find that the Nazis’ views are much more dangerous than Charlie Hebdo’s satire?

Well, what has been done when there have been Nazi demonstrations is instead of people going and confronting them, they will organize a Brotherhood Day in the park and get all the people together to express their desire to live harmoniously. But I think demonstrating against the Nazis would have also been a valid thing to do. So, you know, rather than getting the government to say you can’t do this, you go and say, I disagree with you, which is basically what I’m doing.

O.K. So what other protests have you appeared at?

Well, in 1958 I attended the Youth March for Integrated Schools. I was 14 years old. I got involved in anti-war stuff protesting atmospheric nuclear testing. That was my first arrest, when I was 18. Of course, the Vietnam War, and every other war since then, and civil rights. I picketed Woolworth’s on 34th Street during the civil rights movement.

It’s interesting. You said that 200 people had pulled out?

At least 204. Well, they signed the petition. But six people were supposed to be at the gala, I believe, and they pulled out. But I don’t know if the 204 who signed the protest letter were going to attend this event.

Well, somebody overheard the cops saying, how’s it going? And they said, well, we were expecting 825 to 850 people, and so far we have 500 and we think we’re going to lose 10 percent because of the fear of violence. 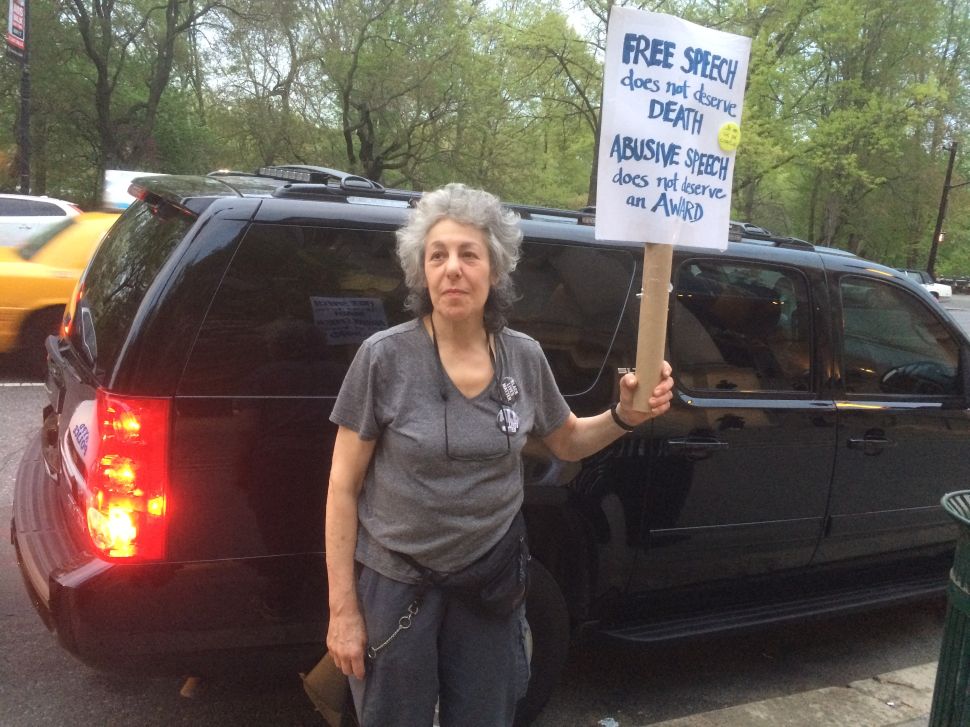