The Venice Biennale is a sweeping international survey of contemporary art that happens every two years; free-standing pavillions filled with art curated by individual countries will be on view for the next several months. By and large, in an dour iteration, this time around there are many images of war and its aftermath.

But the gloomy tone lightens at an 18th century palazzo on the Grand Canal, Ca’ Corner della Regina, where the Prada Foundation (Fundazione Prada) is showing “Portable Classic” through September 13, as a “collateral event” of the biennale.

The elegant show looks at Greek and Roman sculpture, mostly on a small scale, and at the way that artists and collectors since the renaissance have reproduced those works as intimate sculptures, mostly for their own homes.

The august palazzo is anything but discreet, although getting there through dark narrow passageways is. The structure keeps its best neo-classical face for those who will approach it from vessels on the canal. It also keeps its finest works for the piano nobile, the floor at the top of its marble staircases.

Before you get to that level, you walk among life-sized plaster casts on the ground floor, each of which sits on a packing crate. The hint here is that this is the way that most of the world sees the great sculptures of antiquity—in white monochrome and without flaws—if they are seen at all.

Upstairs is the real thing, and the copied thing, reproduced here with the care and attention that makes each reproduction  a unique work of art. Your eyes immediately turn to the Farnese Hercules, club in hand and a cloak of a lion’s skin across one shoulder. (The original was excavated in Rome in a project initiated by the Pope in the 1540s.)

The ten-foot statue has a distressed surface, which gives the impression of age, but it was produced in 2000-2001 for the subway system of Naples, from which it is on loan. Someone must have removed the “Warning to Fare-beaters” sign.

From the window that opens onto the canal, to that colossal figure fifty feet away, a line of effigies of Hercules leads in single file to the Naples giant. Think of variations on an ancient theme, with subtle changes in pose, composition and the expression of the mythic figure. The notion of a small delicate Hercules maybe a contradiction in terms, but the results are dazzling.

Forget thinking of “copy” as a dirty word. The Greeks made endless copies of monumental sculpture from temples and official sites, and much of Roman art consists of Roman copies of similar works, or of copies of Roman statues that drew on Greek influences. By the 1400s, prominent families in Venice, Rome, Florence and other cities were commissioning classical sculpture for their homes if they couldn’t get the real thing, or if the real thing was too large or missing a head or limbs, or lost. Paintings by Lorenzo Lotto and Tintoretto alongside the statues depict collectors with precious objects (which made those collectors look prestigious). Today the practice is the same, but the objects are mostly different.

Curator Salvatore Settis, an archaeologist who once ran the Getty Research Institute, reacquaints you with the seductive charms of Roman art, and with pure seduction, in a small gallery of statues of Venus, some of which are a few inches high, one of which is wondrously transparent. In another gallery, figures of men with outstretched arms from antiquity and the renaissance and baroque eras are arranged in a line of vitrines, as if they were the same figure in stop-motion photographs by Edward Muybridge. The effect can feel surprisingly modern. You don’t miss the Biennale’s contemporary gloom or techno-digital experimentation when you are with these delicate objects.

Prada promises a book on Portable Classic, as it does on Serial Classic, an exhibition of monumental Greek and Roman sculptures (all from antiquity) that just opened at its new campus in Milan designed by Rem Koolhaas. But the fashion firm won’t be collecting antiquities—all the works at Ca’ Corner della Regina are on loan, as are all the antique sculptures in Milan. In September, the giant Hercules will head back to Naples.

Given its ambition, the show is much more intimate and delicate than solemn. As if to prove that, a shiny metal platform at the dock at Ca’ Corner della Regina collapsed at the opening party for Portable Classic, and some exquisitely dressed guests plunged (without injury, other than to their pride) into the canal. It’s a reminder of what the exhibition tells us: They don’t make things like they used to. 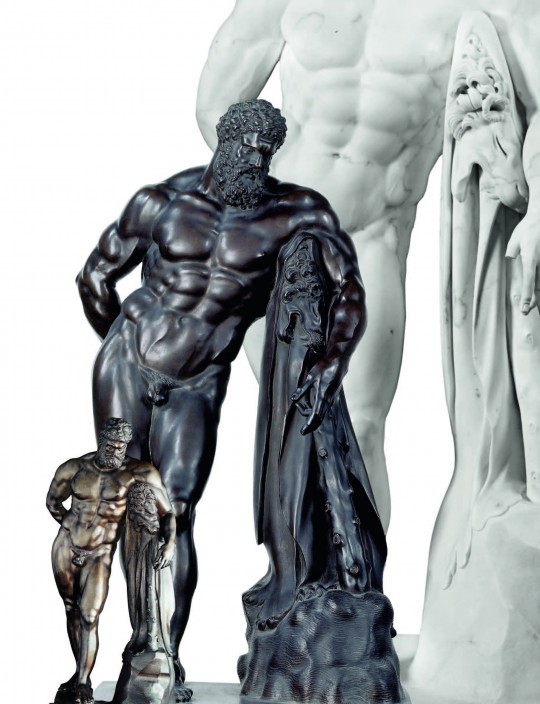