Staten Island District Attorney Daniel Donovan, the prosecutor who became a national lightning rod for his role in the Eric Garner case, won a special election for an open House seat tonight.

With 100 percent of votes reported to the Board of Elections via scanners, Mr. Donovan had 58.9 percent of the vote, compared to Mr. Gentile’s 39.77 percent.

Mr. Donovan, 58, took the stage in the packed ballroom a little after 10 p.m. Joseph Lhota, the 2013 GOP candidate for mayor, and Rob Astorino, the 2014 GOP candidate for governor, stood with him, along with several Staten Island elected officials and Mr. Donovan’s fiance, who is pregnant with their first child. The prosecutor vowed to fight for more transportation funding for the far-flung district, help victims of Hurricane Sandy and relieve taxes on small businesses and homeowners.

Though he struck partisan notes throughout his speech, Mr. Donovan nevertheless vowed to combat the political gridlock in Washington. “Washington bickering, partisan politics and an ever-increasing burden on the middle class are leaving people hopeless,” he said.

Mr. Donovan, a Republican, was always favored to win in the Brooklyn and Staten Island-based district. Running a by-the-numbers Republican campaign, Mr. Donovan defeated a liberal Democrat, Brooklyn Councilman Vincent Gentile, in a race that occasionally grew heated and drew some curious eyeballs from around the nation.

While voters outside New York City—or even just beyond Staten Island—wondered how Mr. Donovan, who was roundly criticized for not securing an indictment of a white NYPD officer in the death of Garner, a black Staten Islander, could run for higher office, the controversy was never an impediment within the idiosyncratic district. In a borough dominated by white, conservative voters and many law enforcement personnel, the Staten Island grand jury’s decision not to indict the NYPD officer, Daniel Pantaleo, was not unpopular. Even outcry in the increasingly nonwhite North Shore could not put much of a dent in Mr. Donovan’s popularity.

Garner, caught on video shouting “I can’t breathe!” as he was placed in an apparent chokehold, was ultimately not a factor in the race. Mr. Gentile rarely discussed his death. Mr. Donovan distanced himself from the grand jury vote in December, telling reporters he had no control over the grand jury and could not legally discuss details of the case. Unlike politicians to his left, he rejected most calls for criminal justice reform.

There were stumbles for Mr. Donovan, who unsuccessfully ran for attorney general in 2010 but breezed to re-election a year later. In a televised debate, he appeared to not know the federal minimum wage. His positions on Obamacare and immigration reform notably shifted in the brief few months he spent on the campaign trail. His campaign forgot to include required disclaimers on their palm cards and signs.

He said tonight that Mr. Giuliani, in a phone call, congratulated him on his victory. He echoed many of the GOP establishment’s–and Mr. Giuliani’s–criticisms of Mr. Obama’s foreign policy, which he called “lead from behind.”

“Islamic extremism is alive and well and the city we call home continues to be their prized target,” Mr. Donovan said. “We need to ensure we have the funding and intelligence to protect us from another attack, as well as a comprehensive military solution to deal with terrorists who are emboldened by the president’s lead from behind strategy.”

Throughout the campaign, Mr. Donovan borrowed many of his talking points from his predecessor, Republican Michael Grimm. His campaign painted Mr. Gentile as a tax-and-spend liberal too closely aligned with Mayor Bill de Blasio, a Democrat unpopular in the district, and at one point said Rev. Al Sharpton was trying to undermine his campaign, a claim Mr. Gentile called race-baiting.

But Mr. Donovan, in personality and temperament, will be a striking departure from Mr. Grimm, the fiery ex-marine who resigned following a guilty plea to a federal tax evasion charge. Mr. Grimm threatened to throw a television reporter off a balcony; Mr. Donovan is amiable and even-keeled, at ease in Democratic and Republican circles. At Mr. Gentile’s campaign kickoff in March, Democrats did not disparage Mr. Donovan, choosing instead to focus on Mr. Gentile’s strengths as a legislator.

Mr. Donovan is a product of the Staten Island Republican machine, having served as a top aide in the borough president’s office of Guy Molinari, but pitched himself as a bipartisan consensus-builder, an admirer of Ed Koch, Robert F. Kennedy and Ronald Reagan alike. He repeatedly reminded voters his father was a longshoreman, a union member and a Democrat. In a show of humbleness, he said he “recently” made his last student loan payment on his law school debt.

Despite his commanding victory, Mr. Donovan will have little time to rest on his laurels. The 11th Congressional District is one of the shrinking number of swing districts in the country and Democrats are expected to turn out in a much higher number for the 2016 presidential race, when Mr. Donovan will seek re-election. The Democratic Congressional Campaign Committee, which sat out this race, is expected to pour millions of dollars into unseating Mr. Donovan.

For now, he will be the lone member of New York City’s congressional delegation in the House majority.

“After a strong campaign, Dan is ready to hit the ground running in Washington on behalf of 11th District families that deserve his bold leadership in Congress,” said Congressman Greg Walden, the NRCC chairman. “Dan will be a dedicated, hard-working, and strong representative in Congress who will fight for jobs, transportation improvements, and the kind of government that Staten Island and Brooklyn families can count on.” 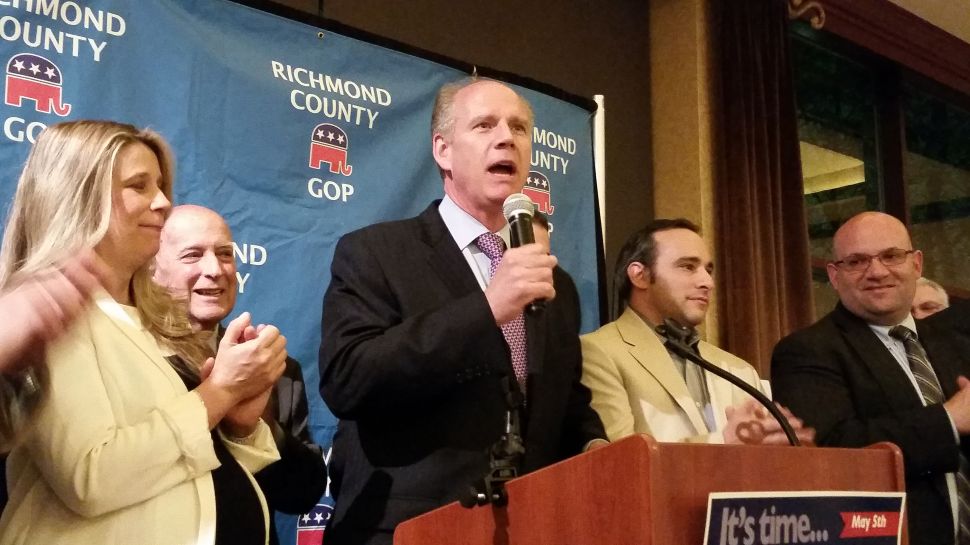