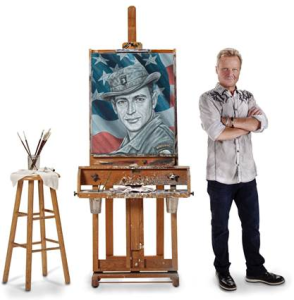 As Memorial Day approaches, television network INSP has found a unique way to remind all Americans about the importance of honoring those who have lost their lives serving our country as members of the military.

INSP’s new series, Brush of Honor, follows artist Phil Taylor as he paints portraits of military service members who have been killed in action. In each episode, Taylor visits the soldier’s hometown and meets with family members and friends to learn as much as he can about a particular soldier in order to accurately reflect the fallen hero’s true spirit in a hand-painted original portrait.

Once completed, Taylor presents the finish portrait to the family of the loved one in a ‘reveal’ ceremony.

The project began after Taylor suffered the personal loss of his friend, Army Captain Blake Russell. Seeking a way to comfort Russell’s family, Taylor painted a portrait of his friend and presented it to Russell’s family. When he saw how moved the family was by the gesture, he knew that he’d found his calling. That’s when he and his wife, Lisa, founded The American Fallen Soldiers Project, a not-for-profit organization dedicated to helping provide comfort and healing to the grieving families of America’s fallen military.

Taylor used his 30 years of experience as a professional artist to develop a signature style for the portraits that incorporates black and white with color accents. As he works to create the finished product, Taylor collaborates closely with the subject’s family to make sure that he truly captures the essence of the fallen soldier. Describing the process, Taylor says, “I like to get to know as much as I can about him or her before I even start sketching. Then once I get started actually painting, those hours working on that portrait are magical to me. Sometimes I paint all night.” He goes to reveal that while he works alone, Taylor never really feels that he’s by himself as he labors the approximately 50 hours it takes to complete each project. “Yes, many times I talk to him or her as I paint them. I feel like we have these intimate conversations that really guide me as I’m doing this. I feel that this person is really here with me through the whole process.”

A grim reality is that part of the reason these portraits mean so much to the many families rests in the realization that because of modern warfare weapons a large number of soldiers must have closed casket funerals. “When that’s the case, parents, spouses and their kids don’t get to touch or kiss them and unfortunately that really robs the family of seeing and feeling them that one last time.,” explains Taylor. “It’s through these portraits that the family gets a chance to not only see their loved one again but they get to take this home with them and have it forever.  And, when these families talk about taking the portrait home, they’re not talking about the just having a painting, of their loved one, they’re talking about actually having something that helps them feel complete.  I hear them say things like ‘He’s finally home now,’ or ‘We have him back now.’ That’s what they really feel when they have the finished piece.”

When he first started doing this, Taylor was really taken aback by the families’ reaction to his work. “I had no idea that a painting could have the capacity for the type of full restoration that I’ve witnessed. I never realized that doing this for people could heal their soul, but I’ve seen that it does.”

Taylor admits that it’s a bit difficult to hear these families’ stories of loss week in and week out, but he insists that it’s all worth it. “Yes, this journey can be a bit taxing at times, but I rest very well in the knowledge that this is what I’m supposed to be doing and I know that as long as I can, I’ll continue to do this.”

Each episode of the series features a reveal of the portrait at a specially planned event that is coordinated and executed by Lisa Taylor. “We’ve forged a strong bond with these families and that’s why I deliver each one of the portraits in person. Sometimes the ceremony is in someone’s home, sometimes it’s in a bit bigger venue. Sometimes we’re doing it at halftime at a sports event in front of 25,000 people. It’s whatever is appropriate for that family.”

He adds that when viewers witness what happens when he presents the portrait to each family, they’ll understand why he continues to do this and they’ll be uplifted as well. “We finish each episode with a celebration in which the loved one’s portrait is brought home and it’s just a really beautiful thing,” says Taylor. “It’s really an upbeat and joyful ending to the journey. It really is a celebration.”

Another aspect of the series that delights Taylor is that each episode is narrated by actor, and Taylor’s personal friend, Gary Sinise, who is an avid supporter of veterans and first responders. “Through this work I’ve gotten to know Gary and he’s really an outstanding guy. I couldn’t be more pleased that he agreed to do this,” says Taylor.

Taylor is adamant that he wants viewers to take away a few things from watching the series. “The most important thing is that we never forget about each of these people who have made the ultimate sacrifice by giving their lives for us. I cannot say how important I feel this is,” he says firmly. “Secondly, I really want people to be inspired to use whatever gifts they have to give back in some way.  Whatever your means are to support or comfort someone use that as much as you can. I think that’s a vital part of what America is about. I think that’s the beauty of our country and we need to keep all of that beauty going.”

Brush of Honor premieres on INSP Thursday, May 21st at 9pm ET.  Two episodes air back to back. Then, in a special encore presentation, those same two episodes air at 9pm ET on Memorial Day. 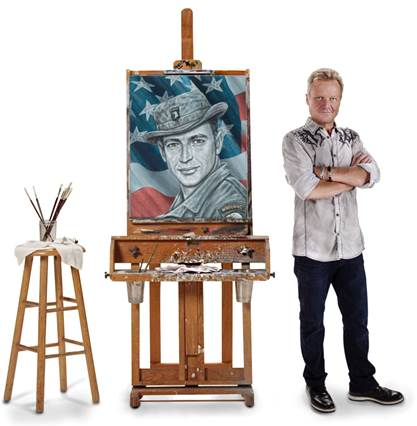