Police Commissioner Bill Bratton lauded slain Police Officer Brian Moore as a “cop’s cop” during his funeral today—and said its actions like his, not criticism of the department, that should define the NYPD.

“Brian’s death comes at a time of great challenge in this country,” Mr. Bratton told mourners in Seaford on Long Island. “We are increasingly bearing the brunt of loud criticism. We cannot be defined by that criticism, because what is lost in the shouting and the rhetoric is the context of what we do.”

Moore, 25, died Monday after being shot Saturday evening in Queens, allegedly by a man named Demetrius Blackwell whom Moore sought to question after seeing him adjust his waistband. Blackwell fled but was apprehended a few hours later, police said; a gun was recovered stashed in a nearby yard days later.

Moore, who came from a police family and whose father was an NYPD officer, had quickly moved up in the department.

“He had an eye for the street, he loved working the street. He could smell the gun. As they say, he had the gift,” Mr. Bratton said.

His death came just days after protesters took the streets in New York City—and were arrested in large numbers—to protest the death of Freddie Gray, an unarmed black man who died in police custody in Baltimore. It also comes months after the city buried two other police officers, Rafael Ramos and Wenjian Liu, targeted by a man who had posted anti-police messages online.

Amid loud criticisms of the department, Mr. Bratton said, the help, the service, the empathy, the bravery, and the protection of police officers is lost.

“What is lost is officers like Brian Moore and the people he served and protected, people like the hundreds who came to the 105 Precinct house to sign the memory book and brought food and flowers and handwritten cards,” Mr. Bratton said. “What is lost is the way we work, already work together, the ways we get it right.”

Mr. Bratton said that the mutual responsibility to keep safety and order is lost in the noise.

“We share the responsibility of keeping each other safe, community and police. It was Brian’s dream to do his part. My dream is a city where every officer and ever citizen does the same,” Mr. Bratton said. “Despite all the shouting and rhetoric, we’re closer to that than people think.”

Mr. Bratton said “the vast, vast majority of cops go out onto the streets to be your police,” referencing the title of a children’s book about the NYPD, Your Police, that had enchanted Mr. Bratton as a child in Boston. He pulled out the book and read from its final words, among them: “We must always remember that whenever you see a policeman, he is your friend.”

Mr. Bratton choked up as he promoted Moore, posthumously, to the rank of detective, as he had done for Ramos and Liu. The shield number was 9003. “I hope that the 9000 series never sees another,” Mr. Bratton said. “But that is probably an idle hope.”

Mayor Bill de Blasio, who ran on a platform of reforming the NYPD and has had a tense relationship with the police force, left the ongoing strife between communities of color and police unmentioned in his remarks.

Instead he focused on Moore’s life—his love of his parents, his devotion to his dog, his Baltimore Orioles fandom—and his longstanding dream of being a cop who served the city. Moore to the NYPD exam at just 17, hoping to follow in his father’s footsteps.

“Brian Moore represented the best of New York City. He was brave, for sure, but his bravery was matched by his compassion,” Mr. de Blasio said.

Mr. de Blasio spoke of Moore’s bounding enthusiasm for his job—he had amassed 150 arrests in just a few short years. A few weeks ago, Mr. de Blasio said, he had to take a short medical leave that left him counting down the days until he could return to work.

“On his second day back, he made a gun collar. And that made him so proud, that he had taken a gun off the streets and kept other people safe. This was just days before we lost Brian,” Mr. de Blasio said. “Last Saturday, Brian showed the courage and the dedication he had always shown, and he made the ultimate sacrifice while keeping our city safe.” 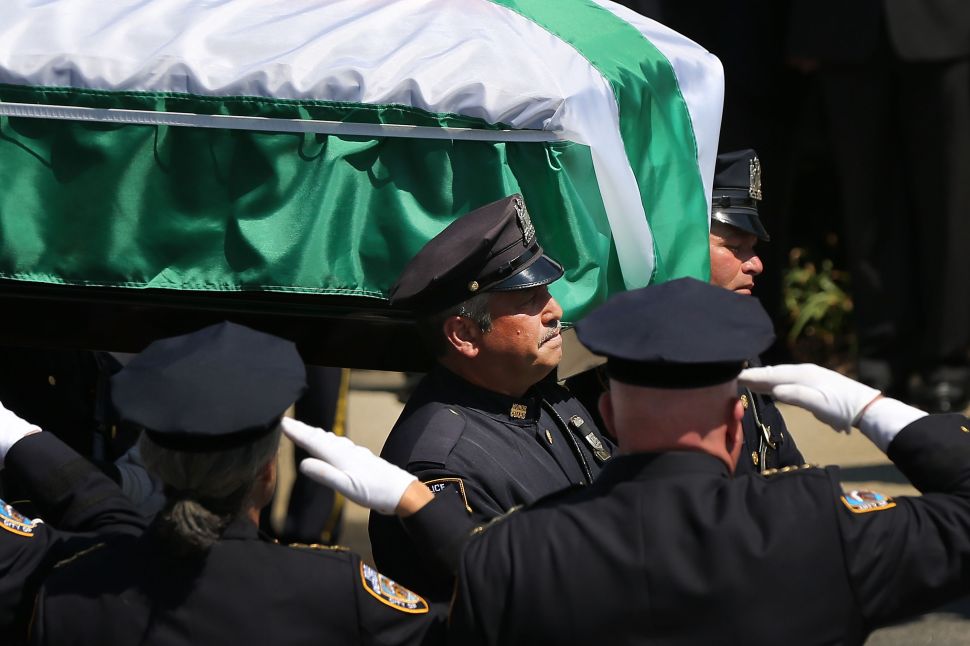