There’s a paradox that is stumping psychologists right now and it’s this: Over the past 50 years, despite the standard of living rising dramatically in the western world, happiness has stayed level, while mental illnesses, anxiety disorders, narcissism, and depression have all gone up.

When you study marketing, the first thing you learn is that fear sells. If you make a person feel inadequate or inferior, they will shut up and buy something in order to feel better. A capitalist system markets to everyone constantly, therefore it promotes a society where people constantly feel inadequate and inferior.

It’s funny, a lot of people who travel to the third-world claim that people are “happier” there. They often follow it up with some banal statement about materialism and how we’d all be so much happier if we knew how to live with less.

This is completely wrong. Poor people in developing societies aren’t happier, they’re simply less anxious and less stressed. People in the developing world don’t care how many friends you have or if you bought the latest DVD box set or not. They’re much more family- and community-oriented. They’re also more socially accepting and less socially anxious simply because they have to be. It’s how they survive. When you take hyper-individualistic westerners — especially ones who have killed themselves at a desk job to make a ton of money — when they’re exposed to this, they perceive it as being a “happier” or “healthier” way of life. In some ways, it is. But at the same time, it’s exactly what our system gave up to gain its abundance of material wealth.

The philosopher Alain de Botton has written about this in his book Status Anxiety. In centuries past, he says, people knew where they fit into the social order. If you were born a peasant, you knew you were a peasant. If you were born a lord, you knew you were a lord. There was no mobility or opportunity, and so there was no stress about getting ahead. You weren’t responsible for your birthright, so you accepted it and moved on.

But in a meritocratic society, something changes. In a meritocracy, if you’re poor, or you gain success and then lose it, it’s not an accident. It’s worse. It’s your fault. You’re the failure. You’re the one who lost everything. And this causes people to live shackled with a constant fear of inadequacy; all the world’s hustle and bustle motivated by a baseline status anxiety.

De Botton doesn’t argue that feudal societies or poor societies were somehow better. He simply makes the point that when a society goes from feudal and destitute to meritocratic and wealthy, the price its people pay for that increased standard of living and social mobility is an increase in stress and anxiety.

After all, the greater the opportunity one has, the greater the anxiety of somehow squandering it. Thus, we stress: we need to make better grades, to get a better job, to date more attractive people, to have cooler hobbies, to make more friends, to be more liked and more popular. Simply being content with what we have isn’t good enough anymore. In fact, for some it’s tantamount to giving up.

Today we live with more information than any other point in human history. According to Google, the internet produces as much information every two years as the rest of all of human history combined. And all of that information is theoretically instantly accessible by us all. It’s truly amazing.

But when you combine a capitalist system with an infinite flow of information, a side effect is a population who is reminded of the infinite amount of ways that it’s not good enough.

In the 1980s a phrase became popular, “Keeping up with the Joneses.” It described the pernicious affect of consumerism. The neighbors got a new car, so now we feel like we need a new car. Your brother-in-law landed seasons tickets to the local baseball team, so now you need season tickets to a team. Your coworker just booked a trip to China, so now you need to travel somewhere exotic.

Now, most of us aren’t douchey enough to feel these types of envy consciously. But unfortunately the “Keeping up with the Joneses” afflicts us all, whether we realize it or not. As humans, we are unconsciously measuring ourselves up against one another constantly. It unfortunately plays a large part in how we define ourselves, whether we want it to or not.

Now imagine that there are two million Joneses to keep up with, and suddenly you have the internet.

In a bitter irony, through open-sourcing information, the internet has also open-sourced inadequacy and insecurity.

One example: The whole “Lifestyle Design” thing that Tim Ferriss started almost a decade ago. Truth be told, it’s an extreme lifestyle that is probably not emotionally sustainable in the long-term, and likely doesn’t suit most people’s personalities. Most people who give it a go end up giving it up after a few years, including Ferriss himself.

Yet if you look around online, you’d think the concept cures cancer or something. I have probably half a dozen people who pop onto my Facebook newsfeed all the time going on about the merits of creating your own career path, following your passion, building a personal brand, living off the grid, doing something crazy and then blogging about it. Ironically, I think many of the people saying this stuff are still living at home with their parents and not making any money. It’s almost like they’re trying to convince themselves more than anyone else.

Everybody I know who actually lives this way generally shuts up about it because they find talking about it too much alienates people back home. Being special is nice, but that’s not where our real needs get met. It’s not a sufficient metric for our overall well-being.

If everyone quit their desk job and tried to monetize a blog about quilting or created an app that counts how many times you pass gas each day, the economy would come to a standstill. Some people are wired to be loners and eccentrics. And others are wired for routine. Some enjoy taking risks. Some like stability.

There’s something admirable about finding satisfaction in the simple, everyday pleasures of life, and it’s becoming harder and harder to do. We’re bombarded every day: here’s the brave soldier who saved a school bus full of kids with nothing but a crowbar and fishing line; here’s the 30-something billionaire who is going to cure aging so we can all live forever; here’s the 12-year-old who can play Stravinksy’s Rite of Spring on seven different instruments with her feet.

The implication is always the same: What have YOU done lately?

Oh, you flossed today? Way to go, you lazy sack of shit. Now let me just retweet that real quick.

Don’t sell yourself out for the sake of attention and false glory. Not that attention and glory are wrong, but they should not be prime motivators that drive your life.

Instead, focus on simplicity. On nuance. Slow down. Breathe. Smile. You don’t need to prove anything to anybody. Including yourself. Think about that for a minute and let it sink in:

You don’t have to prove anything to anybody, including yourself. 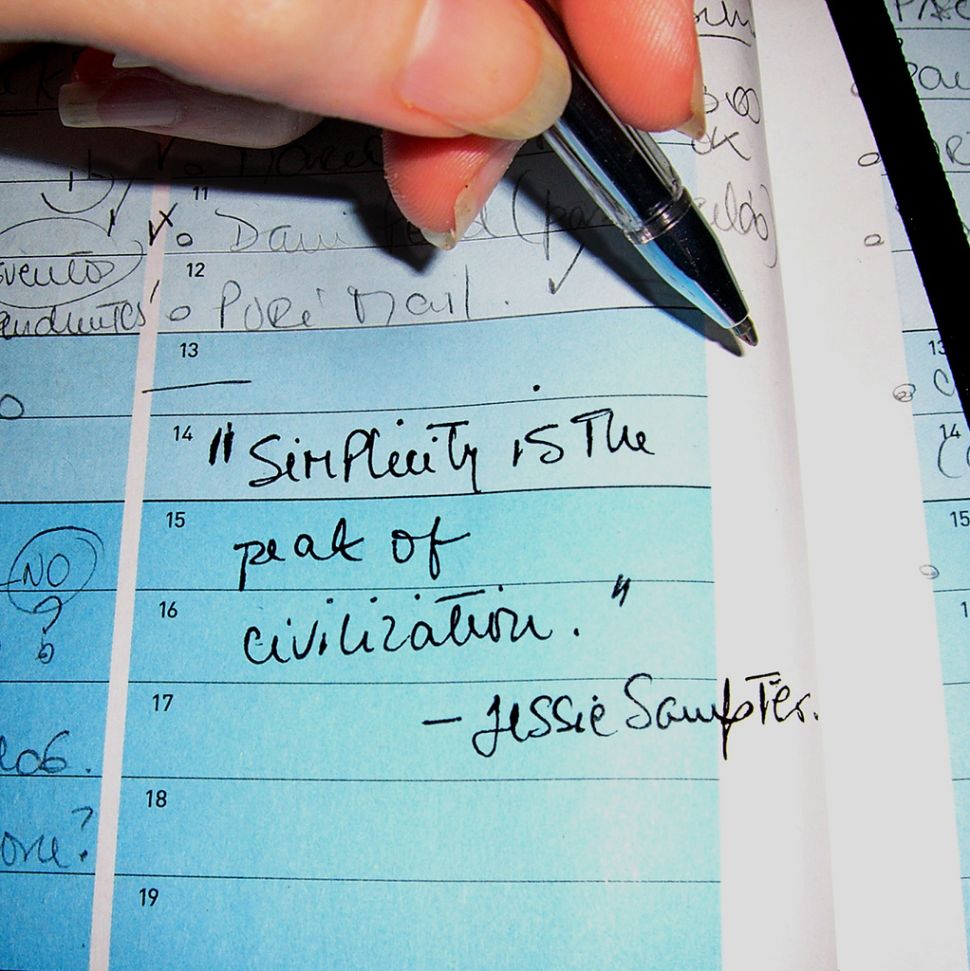