ATLANTIC CITY – It might be considered an off year for election excitement by some political observers, but U.S. Sen. Cory Booker (D-N.J.) was on fire at a gala dinner at the annual New Jersey Democratic State Committee conference in Atlantic City on Friday night, exhorting the crowd to campaign hard this year for Democratic candidates.

“We know in this room right now we may be few in number but the destiny of this state will be determined by what we do between now and November,” said Booker before a crowd of approximately 300 people inside a Harrah’s Resort hotel ballroom. “We know that in these so-called off-election years is when we lay the foundation for the victories that are necessary politically so that we can achieve victory in terms of policy, in terms of our lives and in terms of our well-being.”

Booker critically alluded to Republican New Jersey Governor Chris Christie’s policies when he said that Democrats have been “stuck with being the clean-up crew.”

“We watched years ago when a Republican governor began to raid the pension accounts of this state in order to give ill-conceived tax breaks, and now, today, we’re trying to clean up that mess,” said Booker before an assembly of New Jersey Democratic heavyweights, including New Jersey Democratic State Committee Chairman John Currie, state Senate President Steve Sweeney (D-3), state Senate Majority Leader Loretta Weinberg (D-37), U.S. Rep. Frank Pallone (D-6) and U.S. Rep. Bonnie Watson Coleman (D-12). “When we had a chance to build and improve our infrastructure with another [rail] tunnel under the Hudson River, we failed and saw a Republican administration starve our Transportation Trust Fund, and now we are literally cleaning up that mess. Well, I’m tired of being the clean-up crew. We’ve got to put ourselves in a position where we’re leading again.”

Booker urged the partisan crowd to push to get more Democrats elected to the Assembly to expand the party’s majority in the state Legislature, as well as get a Democrat elected governor in New Jersey in 2017.

“We are the party that cares as much about the people on the dais as we do about the people working in the kitchen,” Booker said to applause. “But we’ve got to go to work. The work of this party is to make sure that every single day we are living and advancing a cause. And if we stay faithful to the cause, we will be victorious.” 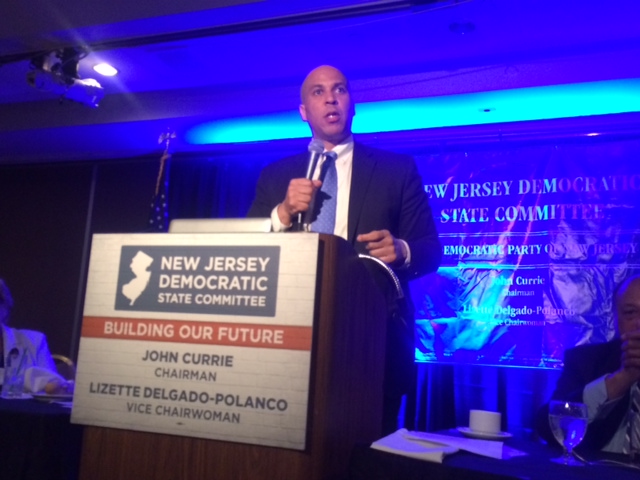