Catherine Deneuve, the greatest Gallic export since Pouilly-Fuissé, gives the lie to those rude adjectives like “matronly” and “thick in the middle.” She is positively gorgeous in her seventh film with director Andre Téchiné, and radiant as ever. The film is In the Name of My Daughter, and it’s a true story, familiar to followers of juicy French scandals, about Renée Le Roux, the famed and glamorous owner of a casino in Nice who spearheaded a murder trial 30 years after the disappearance of her daughter. People still talk about it in the South of France. The film also shows signs of longevity there, although it’s a bit dry for Americans craving action over raised eyebrows.

When her husband dies, leaving her the casino and a blazing fortune that would make Grace Kelly and Prince Rainier look like chimney sweeps, Madame Le Roux finds her rakish, ambitious lover, the casino lawyer Maurice Agnelet (Guillaume Canet), jockeying for the position of manager. Reluctantly, claiming she is aware of his limitations, the crafty Renée refuses. This is the beginning of her problems as she finds her daughter Agnès (a fine Adèle Haenel) falling madly for Maurice herself. With estranged mother and daughter both in bed with the same man, and Renée silently watching her fortunes dissipate in the hands of a murderous Mafioso named Fratoni (Jean Corso), the casino is doomed.

The fire heats to combustion when the charming but ruthless Maurice convinces Agnès to betray her own mother by voting against her at a private stockholders meeting and turning millions of francs over to her smarmy lover, ruining Renée’s future and giving Maurice power of attorney. The French play nasty, n’est-ce pas?

In the rest of this long but involving movie everybody seeks vengeance and comes to a bad end. Agnès tries to commit suicide, then disappears. Since no body has ever been found, it is widely presumed that she was murdered by the Mafia, but even after Maurice takes control of her fortune, Renée remains convinced that he killed her daughter and vows eternal revenge. Thirty years pass and Madame Le Roux (less stunning but equally riveting Deneuve in old-age makeup, supported by a cane) drives the French court to try her ex-lover, at long last, for Agnès’ murder.

It’s a high-class thriller without a single goose bump, but between the mother, the daughter, the lawyer, the Mafia, and the investors determined to separate Renée from her money and power, there’s enough material to juggle several balls in the air at the same time. Lacking action to the point of seeming immobile, Mr. Téchiné nevertheless amasses a catalogue of anger, desire and sex, enhanced by stunning landscapes of villas and a parade of the rich and glamorous haut monde at play.

The disappointing finale is so inconclusive that we are left hanging in limbo. You never know how the story turns out. Still, it’s worth seeing for the undiminished views of Catherine Deneuve’s ravishing beauty. In the Name of My Daughter is her feast from first frame to last, and she chews it like it’s a four-star al fresco lunch at the fabulous Moulin des Mougins near Cannes and she’s eating for two. 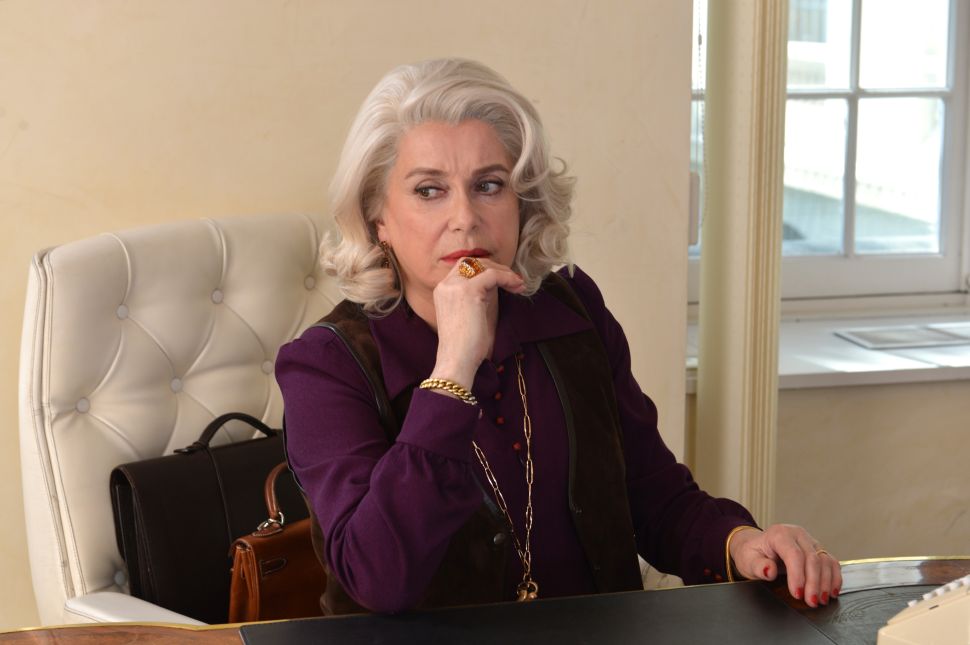 Filed Under: Movies, Reviews, movies, Catherine Deneuve, in the name of my daughter