When he ran for governor of New Jersey in the 2009 Republican Primary, Chris Christie was hardly forthright when PolitickerNJ asked him about the War in Iraq, an action facilitated by Congress and undertaken by then-President George W. Bush, the man who made Christie U.S. Attorney. In fact, Christie gave exactly the same Orwellian answer as Jeb Bush: “Mistakes were made.”

PolitickerNJ remembers the moment well, particularly since leading up to that time this reporter wrote too many times the obituaries of great young men killed in action in a war that cost the United States an estimated $845 billion and the sacred lives of 4,500 U.S. service members, among them Simeon Hunte of Willingboro and Seth Dvorin of Pennington.

When PolitickerNJ asked the campaign trail question about Iraq, Christie gave a reproving look, as though he considered the question out of bounds. “I was never consulted,” Christie responded to whether the war was one of necessity or choice. “A lot of mistakes were made. It’s part of the former President’s record. All I know is what I read in the newspapers.”

That’s what Christie said on February 11th, 2009, in the thick of a Republican Primary for Governor against rival Steve Lonegan, the former mayor of Bogota and a movement conservative allied with then-Assemblyman Mike Doherty (R-23), who in that same primary cycle ran for a state senate seat.

For all of incumbent Governor Jon Corzine’s considerable faults, including a presence in politics that the Star-Ledger correctly assessed as “corrosive to the system,” he got one important thing right: his “no” vote as a U.S. Senator on the 2002 resolution authorizing the president to go to war in Iraq. Then-U.S. Rep. Bob Menendez got that vote right, too. And so did U.S. Rep. Frank Pallone and then-U.S. Rep. Rush Holt.

To his regret, U.S. Rep. Bill Pascrell got it wrong, and so did then-U.S. Rep. Steve Rothman and Rob Andrews and the Republican congressional delegation.

By 2009, as a very wobbly Corzine prepared to face New Jersey voters, the world knew all too well about the absence of weapons of mass destruction in Iraq. But Christie did not condemn Bush’s decision to take the United States to war, nor draw a line as he chooses to do now in his interview this week with CNN: “I don’t think you can honestly say that if we knew then that there was no (weapons of mass destruction), that the country should have gone to war,” he told Jake Tapper.

There was at least one New Jersey Republican who spoke out then and earlier, and did so with conviction.

Having successfully won that 23rd District state senate seat to succeed Leonard Lance as the upper chamber rep serving Hunterdon and Warren counties, Doherty has long opposed Christie, most vociferously lately. Part of that stark separation between the two Republicans goes back to the campaign season of 2009 when having questioned America’s habit of fighting undeclared wars, Doherty – a proud U.S. Army veteran – became the target of a robocall and mail campaign by the Christie-backed Marcia Karrow senate campaign declaring that Doherty favored “Surrender in Iraq.” (the mail piece is pictured below).

At the top of the ticket in opposition to Christie, Lonegan struck back at the time.

“Mike Doherty is a West Point graduate who served for eight years in the United States Army. Mike and his wife, Linda, have three grown sons in military service,” Lonegan said. “Their son Ryan just returned from a tour of duty in Iraq with the United States Marine Corps. Their son Matt is set to be deployed to Iraq with the United States Army. Their son Jared is stationed on remote duty in South Korea with the U.S. Air Force. …The author of this attack on an American veteran is Chris Christie’s political consultant, Jamestown Associates. Christie campaign chairman Joe Kyrillos and Co-chairman Tom Kean Jr. are Karrow’s top supporters. Neither Mr. Christie or Senator Kean or Senator Kyrillos have ever served in the United States military. Karrow has not served. These people are shameless. They have no right to question the patriotism of Mike Doherty or his family.”

Lonegan lost to Christie, but Doherty won. The Iraq War issue never came up again that year with any force. Christie, for his part, had already addressed it, and New Jersey, apparently had already hurried on, satisfied with his answer: 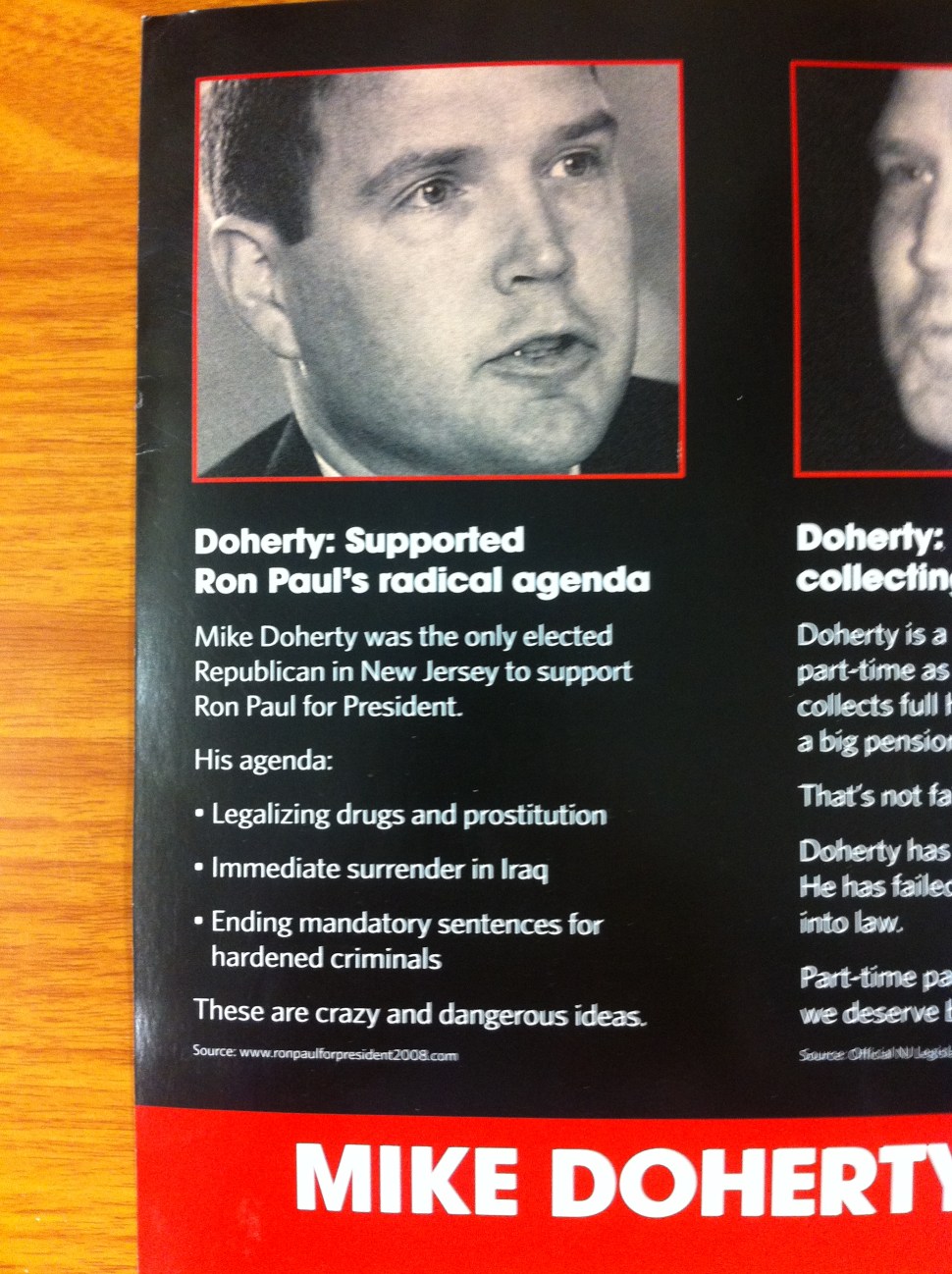