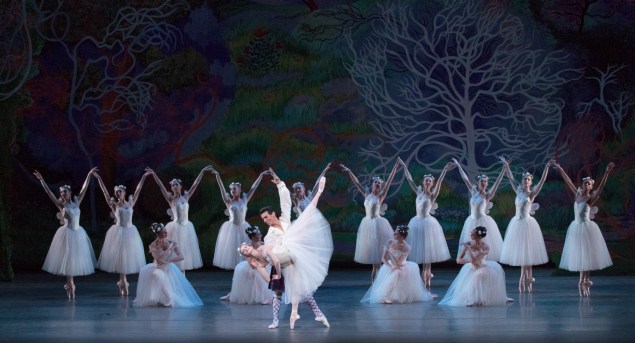 City Ballet can do it right and do it wrong in bewildering succession. Peter Martins has restaged La Sylphide, August Bournonville’s 1832 version of this quintessential Romantic ballet—a work that has held its place in the world repertory for more than 180 years, and is still very much alive. This most famous of all Danish ballets is home territory for Martins, and he honors it by presenting it cleanly and clearly, with no trendy updating, except perhaps for the bizarrely psychedelic second-act set. The forest home of the sylphs should be otherworldly, not surreal.

The other radical decision he has made is to ignore the break between the two acts. To my surprise, by plunging us directly from the everyday life of James’ solid farm house into the supernatural world of the Sylph, Martins gives us a jolt that may not have been Bournonville’s intention, but is a plausible alternative, not a desecration. And of course omitting the intermission speeds up the evening and gets everyone home earlier, including the stagehands and the orchestra.

Sir Walter Scott, the most widely read novelist of his time, had almost singlehandly throughout the world, had almost singlehandedly made his homeland into an exotic fantasy for the entire world to enjoy. No surprise to Bournonville’s audience, then, that when the enchanting Sylph, in her white tulle and little wings, appears to James as he naps in his chair while waiting to celebrate his marriage to the nice local girl, Effie, he is fatally drawn to her. And so he abandons “real” life for life on a different plane, dooming them both.

City Ballet dancers are not bred to be ineffable forest sprites, and alas for me, I wasn’t able to see first-cast Sterling Hyltin, who has the qualities the sylph requires—the lightness, the playfulness, the naïvely provocative appeal. Instead, I saw two of the company’s finest dancers, Ashley Bouder and Tiler Peck, both magnificent technicians who danced impeccably. But neither was born to this role. The two Jameses I saw, Andrew Veyette and Gonzalo Garcia, handled the Bournonville vocabulary satisfactorily, yet neither found a way to suggest, at the start, that James was restless enough, romantic enough, to abandon Effie and his pleasant home life at the sight of the first Sylph who comes his way.

James’ rival for Effie’s hand, his neighbor Gurn, was handsomely danced by both Joseph Gordon and Harrison Ball, but they’re made to seem so young and feckless that they don’t seem old enough to be Bar Mitzvahed, let alone married. And the young women who play ed the witch, Madge, put on a good show but didn’t really suggest the profound malevolence that might explain her demonic rage. This is a role that demands superb acting—and indeed has been played by many superb dancers, including the great Erik Bruhn. (How about P. Martins in the role?)

But these are all issues that can be addressed. The important thing is that this venture into Romantic ballet—material Balanchine approached in his own distinctive way with his 1952 Scotch Symphony—is a major stretch for the company. Should we be looking forward to Giselle?

Opening the program was Bournonville Divertissements, the potpourri of Bournonville excerpts that in 1977 the great Anglo-Danish teacher, Stanley Williams, staged at Balanchine’s request. It was a delight then and it’s a delight now, but not the same delight. Over the years, the company has altered it, deleting several of its most delectable sections—most noticeably the “Jockey pas de deux” and the ravishing pas de trois from La Ventana. (It was in the latter that Kyra Nichols first made a strong impression.) So it’s a lot shorter now, and less substantial. But watching these young dancers respond so eagerly to the subtleties of Bournonville style—the lightning footwork, the airiness of the jumps, the suggestion of happy community—make it seem even more criminal that this work, in whatever configuration, has been frozen out of the repertory since 1999.

Apart from its great virtues as a dance work, it’s a wonderful piece for dancers to learn on. And there was one revelatory performance: Teresa Reichlen in the famous Flower Festival in Genzano pas de deux. Suddenly you forgot how tall she is, or the severity she can project, or the glamour. She was simple, playful, in complete command of the tricky steps but never showing off or carrying on. Who’d have thunk it?

On the other hand Reichlen was not happy in her debut in Balanchine’s Walpurgisnacht Ballet—it was a tentative performance, not technically but stylistically. This work is, to put it mildly, minor Balanchine, made in about 10 minutes for a Paris Opéra production of Faust, and resurrected, with improvements, for Suzanne Farrell in 1980. It has no substance, and not much charm, but it’s a vehicle for the kind of dancer who loves to fling herself into things—in fact, it’s all fling. (And hair.) Which means it’s a perfect vehicle for Sara Mearns. It opened an all-Balanchine evening recently, followed by another ballet taken out of storage after many years: Sonatine, to Ravel’s lovely score. Only 12 minutes long, Sonatine was the most convincingly danced piece on the program, Bouder and Garcia revealing its elegance, complexity and originality in unforced performances. Why has it, too, been in exile all these years, while piles of junk go on cluttering up the repertory?

It was an all-French program, and next up was Ravel’s La Valse, Balanchine’s great success from 1951 and Tanaquil LeClercq’s most famous role. Here we had Mearns at her worst. As I’ve suggested, she’s a flinger—not Balanchine’s cool, restrained girl in white who gradually succumbs to a morbid flirtation with death. Mearns enters already so distraught that she might have come straight to the ballroom from the snake pit. As usual, she’s about showing us how passionately she dances, not about her roles.

Finally, Symphony in C, to Bizet, one of Balanchine’s greatest and best-loved works. It was a lackluster performance, although Ana Sophia Scheller did a capable job in the demanding First Movement. She doesn’t have the full command this role requires, but she was musical and proficient, and pleasing. Maybe, as often happens to dancers, she’s come back deepened after a long lay-off. Maria Kowroski is still a glory to look at in the Second Movement—those fabulous legs soaring across the stage in the climactic lifts—but she’s revealing a slight tentativeness elsewhere. The concluding movements lacked the joie de vivre they should have. Yet the huge finale, with a million dancers dancing up a Balanchinian storm, made up for everything. What a work! It’s one of the dozen or more ballets I’ve believed at one time or another to be Balanchine’s greatest. 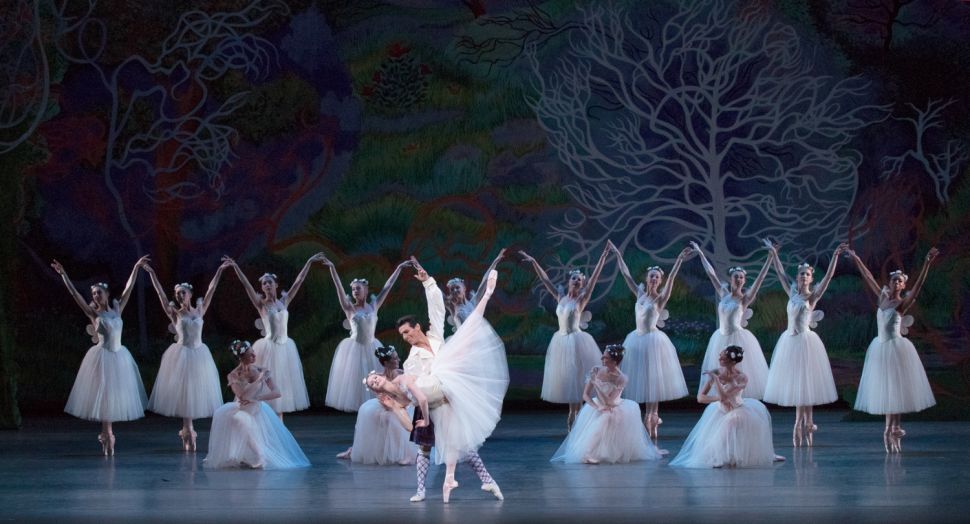