The trio were among a number of elected officials to address the thousand-strong crowd consisting of members of several influential unions and of advocacy groups like the Met Council on Housing, New York Communities for Change, the Crown Heights Tenant Union and the Flatbush Tenant Coalition.

Ms. James, a Brooklyn Democrat, laid out an aggressive agenda to curtail the powers of landlords, including an end to vacancy decontrol for units in the rent control system, a ban on property owners from increasing rents on vacant units, and a repeal of the Urstadt Law that puts the city’s rent laws in the hands of the State Legislature.

The public advocate demanded that the Republicans controlling the Senate, most representing constituents not subject to the rent laws they control, pass those measures when the rent laws come up for renewal next month.

“Albany and upstate Republicans should not be regulating our rents,” she repeated twice. “Working class New Yorkers should not be living in fear, a perpetual state of fear, that they will be unable to afford their rent.”

Mr. Wright, on the other hand, highlighted that two of the 32 Republicans in the State Senate who do in fact represent areas of New York City: State Senator Martin Golden of Brooklyn and State Senator Andrew Lanza of Staten Island.

“The New York State Senate doesn’t even want to talk about this issue. We have to make sure that they must talk about this issue. Got to remember, they only have two members, two members in their conference that are affected by rent stabilization,” said Mr. Wright, a Manhattan Democrat who chairs the Assembly’s Housing Committee. “Better start calling Marty Golden and Andrew Lanza. I call the names, didn’t I? I called the names. We got to call the roll in this one. This is a defining moment.”

Mr. Lanza’s office did not immediately respond to requests for comment. Mr. Golden’s office declined to comment. Mr. Wright came under fire in 2013 for sponsoring legislation with Mr. Golden that allowed several luxury developers to receive the controversial 421a tax exemption.

Mr. Williams, a Brooklyn Democrat, fired his rhetorical fusillades solely at Mr. Cuomo, who he argued had the political clout to push stronger tenant protections through the legislature.

“If that does not happen, the only person you have to blame is Governor Andrew Cuomo,” the councilman said as the governor’s name drew boos from the crowd. “We blame Governor Cuomo!”

Mr. Cuomo’s office simultaneously credited the governor with establishing stronger tenant protections in 2011, including a new unit that allowed 40,000 deregulated units to re-enter rent control—but also suggested it was outside the governor’s power to unilaterally change the state laws without the support of the State Senate and Assembly.

“We would be happy to send the councilman a copy of Robert Ward’s seminal book, New York State Government, in order to‎ give him a refresher course on the legislative process,” said Cuomo spokeswoman Dani Lever.

Ironically, several of the unions that organized the event—1199 SEIU, Hotel Trades Council and DC37—have endorsed Mr. Cuomo and Mr. Golden in the past. For years, 1199 contributed campaign cash to Senate Republicans. 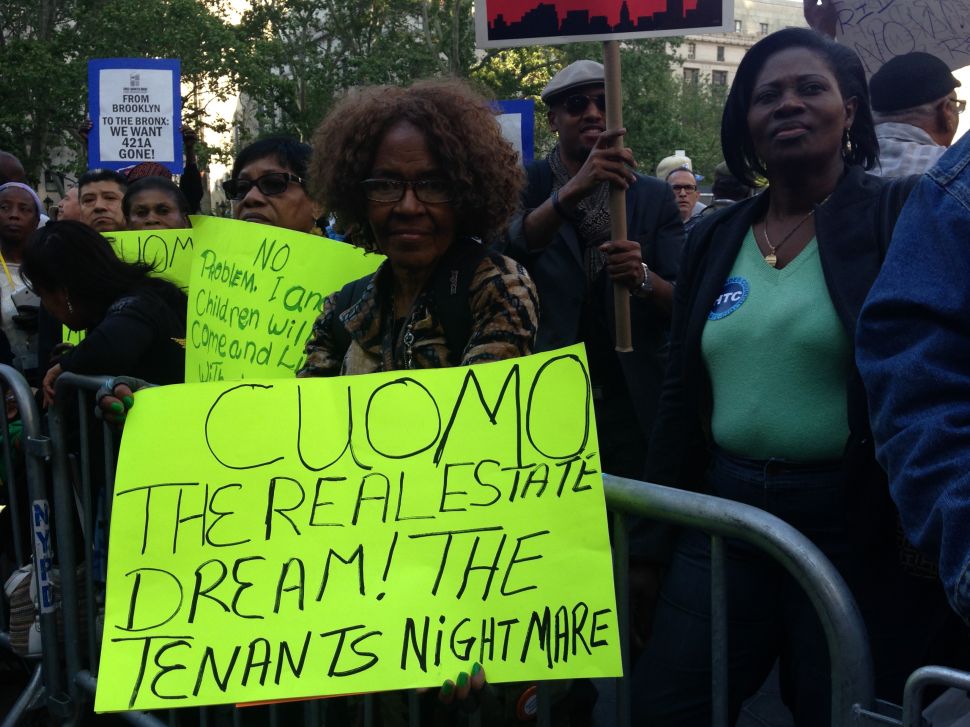