Staten Island District Attorney Daniel Donovan cast a vote for himself this morning and said he’s confident that, despite expected low turnout, he’ll be the victor in the special election to fill a vacant congressional seat representing Staten Island and part of Brooklyn.

“Turnout’s expected to be low, but we’ve gotten an incredible response throughout the entire campaign. The last few days, you could feel the electricity. We’re very optimistic that we’re going to have a victorious night tonight,” Mr. Donovan, the Republican candidate, told reporters today after casting his ballot.

Mr. Donovan cast his vote at an elementary school in the Rosebank section of Staten Island with his fiancée, Serena Stonick, who is expecting the couple’s first child together in just two weeks. As he crossed the school gymnasium to fill out his ballot, he kidded that he wanted to make sure Ms. Stonick voted for him.

Asked who he voted for, the easy-going Mr. Donovan—heavily favored to beat his Democratic opponent Brooklyn Councilman Vincent Gentile—cracked, “That’s a private matter, but I voted for me.”

During the roughly 20 minutes the Observer was at Mr. Donovan’s polling place, it appeared only two people other than the candidate and his fiancée showed up to vote. Turn-out is typically low in special elections—and that may be compounded by a bit of congressional campaign fatigue on Staten Island. Voters just went to the polls in the congressional race in November—re-electing former Congressman Michael Grimm by a wide margin, even though he was under indictment on tax charges. While Mr. Grimm had promised he’d be vindicated during his campaign, he pleaded guilty just over a month later to a single count of felony tax fraud and stepped down under pressure at the start of the year.

But Mr. Donovan said he didn’t believe that background would put a dampen voter enthusiasm.

Mr. Donovan is not without controversy himself. The prosecutor, who long maintained a comparatively low profile, shot into the spotlight after a grand jury he convened declined to indict police officer Daniel Pantaleo in the chokehold death of Eric Garner, an unarmed black man who police were attempting to arrest for selling untaxed cigarettes on a Staten Island street corner last July.

Mr. Donovan has largely avoided discussing Garner’s death during the campaign, and as the borough’s top law enforcement official, he’s expressed supporting for the broken windows style of policing that targets the kinds of quality of life crimes Garner was accused of committing.

Mr. Donovan said today the top issue in the campaign is the economy, and said voters felt over-regulating and over-taxed.

“People are being taxed to death, their businesses are being regulated to death,” Mr. Donovan said today. “I think people just want to have less government in their lives and to be left alone.”

Shortly after Mr. Donovan voted, Mr. Gentile was set to cast his ballot in his home borough of Brooklyn—which represents a significantly smaller portion of the district than Staten Island, putting him at a disadvantage compared to a Staten Island based politician.

The polls are open until 9 p.m. tonight. The race is one of just two in the city today—voters in central Brooklyn are also picking a new Assembly member to replace Karim Camara, who left the legislature to work for Gov. Andrew Cuomo. 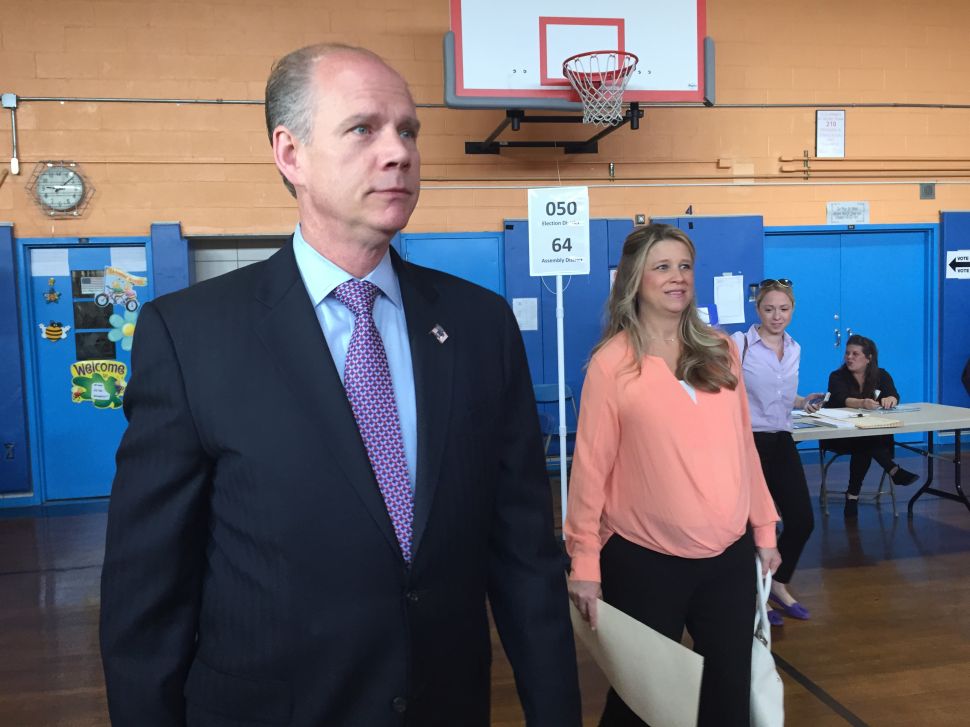