Here we are at the end of the road. A Daredevil has been born and a newspaper man has died. The only way to write this is with Boys II Men’s Greatest Hits playing in the background. Do you know the biggest mistake people make with B2M? Thinking they got some kissy romantic songs that you can throw on when you’re in a romantic mood. WRONG. It’s Motownphilly first—a great warm-up song and then like 30 tracks about mamas and dead friends. Which has a time and a place obviously but once you make that mistake…shut the lights off and hit play you can’t take it back, you either laugh about it or suffer through trying to kiss to How Do I Say Goodbye to Yesterday. Ughhh, Ben Urich, you beautiful fool. How did you not see this coming? You big dumb gorgeous metaphor. Of course you got sacrificed to push Matt Murdock over the edge and take the final step to Daredevilness. You never stood a chance.

Ben Urich is the old school. Ben Urich is feet-on-the-ground reporting. Ben Urich is a boxy television set with a V-shaped antenna attached. Ben Urich has thrown shade at the internet since episode three when he argues with his editor about these “bloggers” who make more money writing stories from home in their underwear. Ben Urich thinks the world wide web is filled with gossip and that bloggers make up facts as they go along. He’s not wrong. I’m making this all up as I go along. But you know what, Ben Urich doesn’t get to live when he is a creation of a show being streamed on Netflix. This is the new world—a place where 13 episodes get released in one shot on a Friday and everyone has seen the whole run before the weekend is over. Ben is sacrificed to the Ghost in the Machine. The Ethernet God. Ben doesn’t get to take his wife to Paris. He doesn’t get to redeem his career and write a click-bait inducing Tumblr post about how Wilson Fisk, fake savior of the city has no actual plan behind any of his rhetoric, and oh yeah one time he bashed his dad’s head in with a hammer, too. That remains unwritten. Why? Because Ben Urich never stood a chance.

Ben Urich is from a different time. A time when someone who has the reputation of being the literal worst person in the entire city, the man pulling the strings, a Kingpin-type would sneak into your apartment just to threaten you. Seriously, Ben Urich, I love you but did you not expect to die the second you heard Fisk go into a soliloquy behind you? What experiences with less badass people have you had where they would break into your place, threaten you and then just leave? Your misplaced confidence was so inspiring, I believed that you believed that you weren’t dead meat even when I heard it coming from ten Hell’s Kitchen rooftops away like Matt Murdock. You old fool.

You and Leland Owlsley, too. Leland Owlsley you big dumb idiot, you plotting scoundrel. How do you see everything that Fisk is capable of, the car door head-busting, backstabbing, art gallery loving, head-butting, double fist-punching sociopath and think you ever had the upper hand. That you could smugly flex on a sociopath? Your math abilities deceived you when you thought one Fisk fist plus two Fisk fists doesn’t equal you dead in an elevator shaft. Typical Baby Boomer cockiness, thinking that the monetary consideration of Fisk’s empire would quench his urge for revenge. You messed with his girl. Big mistake. Ben Urich messed with his mom. Old fools. This isn’t some Shawshank Redemption 1930’s situation where they ruin your career. This is 2K15 old man. Welcome to the party and see yourself out at the same time. You never stood a chance either—at least you made it look good while you were around.

Matt Murdock, you are the Daredevil. You got a red suit and accepted your fate. And you beat Fisk…for now. Fisk also had a conversion—he accepted his gangster. Someone made the mistake of asking Fisk a question. They said “what are you talking about?” when he was rambling in the back of a police van. You never ask a question in Hell’s Kitchen. But they did and got a forty-five minute story about Samaritan’s and priests-of-ill-intent. Fisk realized that he was the bad guy finally. What was never clear was how he ever thought differently. He hated everything about Hell’s Kitchen but spoke of loving it. He wanted to save it by destroying it. He hits his henchman for being loyal and then respects that henchman’s loyalty above all else. He’s a Kingpin but nobody ever calls him that.

This was such an entertaining season. It is a circus funhouse of mirrors. Everyone is each other’s opposite. Foggy wants to make money, Matt wants to save the innocent. Daredevil is righteous but loses the woman he loves because she is scared of his potential to hurt people. Kingpin is devilish but finds a woman who loves him for the dirt he is capable of doing. Matt fights everyone but can’t kill. Karen doesn’t want to fight anymore but does kill. Karen murdered a very bad man that was threatening her life. He kidnapped her and took her hostage, offered her a job and then she killed him. And it is destroying her. But she is living with it. Matt is tortured by not killing Fisk. Matt is tortured by the past. Matt is tortured by his dad. Matt is tortured by religion. Matt is tortured for all the people he couldn’t save and hearing people’s heartbeats, and Stick, and boxing, and lying to Foggy. Foggy wishes he was a baker. There are levels here.

I didn’t read the comic books—they seem like an interesting take on good versus evil but I can still enjoy this show. I don’t know anything about Catholic people—they seem highly guilt-ridden about pretty much everything but I can enjoy this show. I think Daredevil is good at fighting and bad at decision-making and I still enjoyed this show. Fisk had a very convoluted plan to do…something in Hell’s Kitchen and he’s better off staring at stucco walls in his happy place in prison. Daredevil says to Fisk, “not everyone deserves a happy ending.” Which is fine because, nobody gets one. Not one person. Madame Gao is off in whatever far off Golden Child world at the end of the Earth, “do you have the knife, give me the knife” place she comes from. Karen has PTSD. Foggy is a goofball. Stick is wandering around shooting bows and arrows at kids. That Priest is still talking to whoever will listen about lattes. People are using children as doomsday weapons. They’ll all be back. Back to the bad decisions that are as plentiful as dark alleys in Hell’s Kitchen. One Sweet Day. 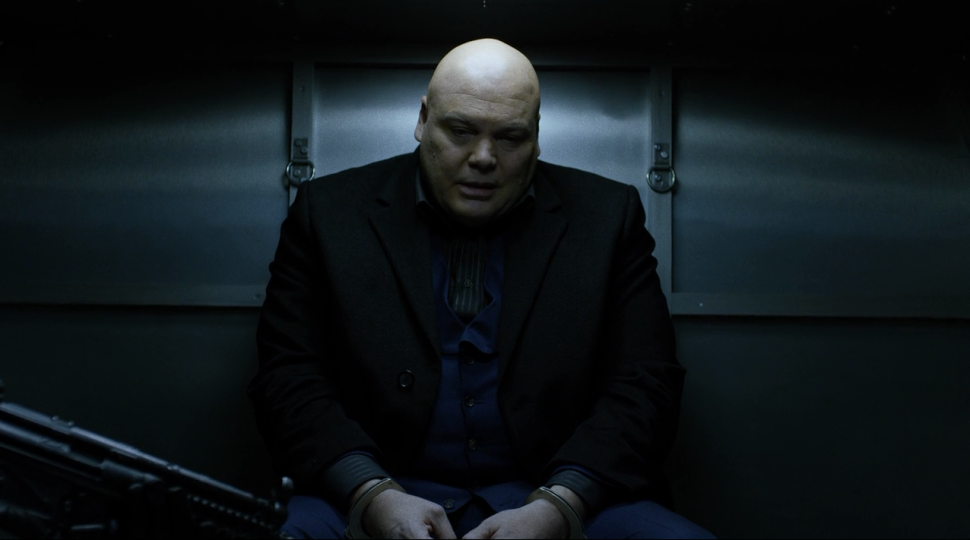