When we last saw our hero, he was surrounded by cops after four different buildings in Hell’s Kitchen all exploded simultaneously. He is handcuffed and the dirty police start to kill off the surviving members of the Russian gang. But Daredevil has never met a dark alley that he couldn’t fight his way out of. He disarms the 5-0 and makes off with a semi-conscious and very wounded Vlad. Daredevil holes up an abandoned building trying to convince Vlad to give up some info on Fisk. Remember, Vlad knows that Fisk was behind the death of his brother, Anatoly, but he also thinks that Daredevil is working for Fisk. Daredevil repeatedly saves Vlad’s life, cauterizing his gunshot wound with a road flare and then later by physically beating him back to life after the two of them fall through three floors. Finally at the end, Vlad gives up Leland Owsley’s name as the money man behind the Fisk collaborative.

At the same time, Karen has been continuing her Union Allied investigation with reporter, Ben Urich. They’ve managed to dig up a good amount of dirt. Ben has a big chart in his office, the kind that they use in crime dramas to link all of the players together. Each suspected person’s name is written on a playing card. But who is behind it all? The King card has a big question mark written on it. Then Ben takes a pushpin and tacks up the King card. Hmmm. That has a nice ring to it. King-Tack? No. Push-King. Nah. Oh, forget it. Karen continues to ask questions. She’s sneaking around. Foggy has the hots for her so he notices she’s been acting weird, like carrying mace on her keychain. Why does she have mace on her keychain? Maybe because she lives in a city where someone tried to frame her for murder by killing a friend in her apartment after they drugged her, then half of that scum-pit city spontaneoulsy exploded one night, and every street is actually a dark-alleyway lit by Ingrid Bergman’s gaslight. All Foggy wants to do is start up a law firm softball team, even though there is only three of them and Matt Murdock is a blind man. Whatever, Matt Murdock probably could hit better than anyone with sight because he could hear the pitcher’s knuckles crack and know when the ball is over the plate by the smell of the catcher’s mitt. Karen gets attacked by some shady goons who are also construction workers in the employment of Fisk’s real estate scheme. She can’t reach the mace, but here comes Froggy with a softball and bat to help her out. He carried them around with him while he was following her. If I was going to follow someone who was acting strangely, I wouldn’t carry around random softball equipment, I would have a golf bag full of hockey sticks like Casey Jones from the Ninja Turtles but that is just me.

Daredevil tracks down Leland Owsley in a garage meeting with Nobu. He roughs him up but Leland gets the drop on him because Daredevil hears a familiar clicking sound. It is Stick, a mysterious blind man from Matt Murdock’s past. These episodes start to really focus in on some good backstory, not just for Matt but for Wilson Fisk as well. So far we know that both of these guys claim to be acting out of the best interest of the city. Daredevil appears to be the hero even though there is footage released of him beating up the cops, so the whole city thinks he is the bad guy. Wilson Fisk appears to be the villain because he is involved with drugs, which is code for “he’s the bad one.” Also, his gang kidnaps kids and messes with old lady’s apartments. But most of the city doesn’t have a clue who Wilson Fisk is, including super reporter, Ben Urich. And when Fisk finally reveals himself, he does it in a way where he looks like the hero to the city.

Good and bad, are either of these things real? Daredevil beats people up but he won’t kill them. But the people he has beaten up do die. Partially because Fisk keeps finishing them off. Matt’s involvement basically sentences them to death. Claire is afraid to let herself fall in love with Matt because she is afraid of what he is capable of. Fisk has a woman totally in love with him because of what he is capable of. Good and bad, is there a clear answer?

The thing that is clear is that all dads in this world are effed. Matt Murdock’s dad got involved with the mob. He agreed to fix a fight but then changed his mind because of his son. But also out of his own pride. He ended up dead because of it. Matt heard the gunshot that killed him. Matt blames himself for his father’s death. And Matt picked up a bunch of bullshit instilled in him by his father like, “Murdock’s never quit” and “I have the devil inside of me.” Thanks for the cool baggage dad.

Wilson Fisk’s father got involved with the mob. He borrowed money for his campaign to run for 3rd District City Council. He runs to make a better life for his son but also out of pride, to make something out of himself and make some money from those sweet city council bribes. But his campaign is a flop and the neighborhood treats him like a joke. He brings Wilson with him to confront a neighborhood kid who is disrespecting his campaign signs by knocking them over even though the election has passed. Daddy beats up this kid and then makes young Willy kick him while he is down. Wilson is upset about this so his dad makes him stare at a white spackle wall while he goes to beat up on Mrs. Fisk. Wilson kills his dad with a hammer to the head. Wilson also blames himself for his father’s death, as he should. And Wilson picked up a bunch of garbage from his dad about making people respect you and going after what you deserve whatever it takes. Current day Wilson still sees himself in the mirror as the bloody boy. He can’t sleep at night and stares at the white painting he bought from Vanessa because it reminds him of his quiet-place wall from when he was a kid.

Matt’s other flashback father figure, Stick, is a crusty old blind dude who wants to make Matt into a soldier. He teaches him how to see without his eyes. He shows him how to fight by beating up child-Matt. He talks badly about Matt’s dad and as soon as Matt starts to get close to him—mind you this is a kid who went blind, lost his dad, and is experiencing his senses turning him into a superhero—then Stick bails because emotion is weakness and people being close to you will get them and you killed. Stick has some involvement with a giant scarred man with a deep voice who talks about “the door opening.” I’m sure that is going to be a really pleasurable experience for The Kitchen.

Matt’s mom is her own issue, or at least that’s what the nun at the orphanage said about her so I’m sure we’ll see what kind of a piece of work she is soon. Wilson’s mom sawed his dad apart after he killed him and they dragged him out to the river one piece per week. Good family values.

Stick’s reappearance has to do with Nobu’s plan to bring some kind of a weapon called the Black Sky into Hell’s Kitchen. The Black Sky turns out to be a young looking kid. Even though Stick promises Matt that he won’t kill anyone, he offs the Black Sky kid. Nobu is furious at Wilson Fisk because he was supposed to provide security for the shipment to come in. Fisk’s business interests continue to unravel thanks to Daredevil’s involvement. Madame Gao shows up at his apartment and tells him to get his act right. Foggy and Karen tell Matt about their investigation and he agrees to help as long as they do it through legal channels and without running around and putting themselves in danger. They trust Ben to help them. Daredevil goes to see Ben and gives him all the info on Fisk to write an article bringing his name into the light of the city. But as Ben is writing it, Fisk gives a press conference blaming all the evil in Hell’s Kitchen on the Daredevil. Who is good? Who is evil? Who has the worst dad? We shall see. 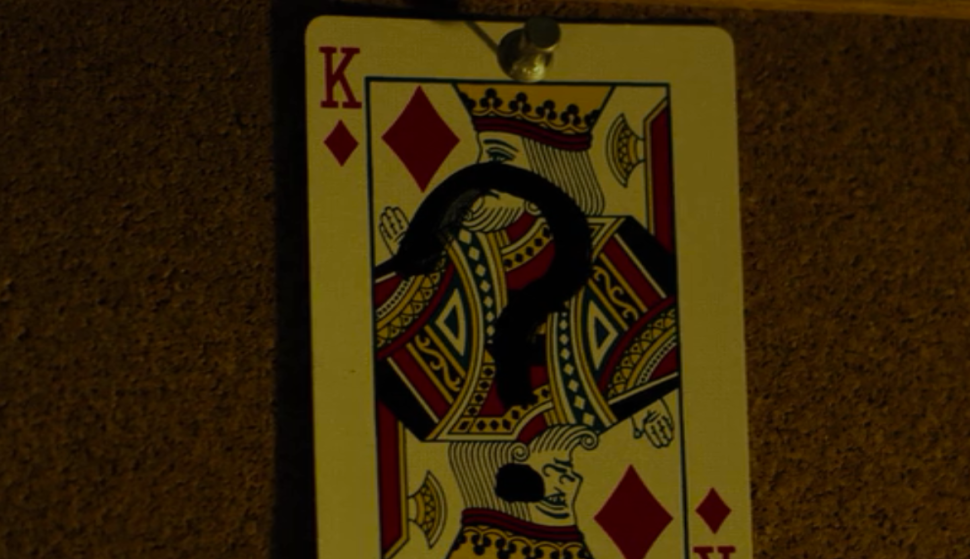