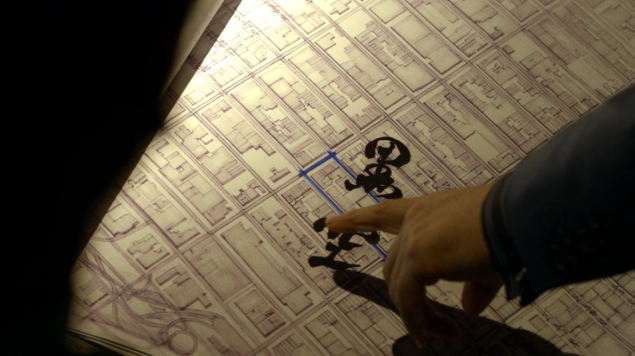 The devil is in the details.

Daredevil has got himself a ninja problem. What do you do when you have a ninja problem? You gotta fight them to the death. Yours or theirs—either way problem solved. DD and the red ninja go back and forth, the advantage shifting each time a continuation of the fight scene is cut into the episode. Daredevil has his escrimas and the ninja has a kusarigama. I am not an expert on traditional weaponry. I actually just internet searched “Daredevil wooden sticks” and “sharp knife on a chain” and that’s what came up. Very handy that World Wide Web. The ninja turns out to be Fisk’s ally, Nobu. Fisk asked for Nobu’s help in getting rid of the masked man since Daredevil was wreaking havoc on their plan to turn Hell’s Kitchen into a giant map of streets with one block covered in Japanese writing. Nobu was like “I’ve got a guy for that” and then he sent himself which is terrible bad guy micromanaging and so he ended up literally engulfed in flames on fire but not before filleting Matt Murdock like he was Hell’s Kitchen’s finest ceviche.

Before being attacked by Nobu the Flammable, Matt is trying to sort through his feelings on killing bad guys so he goes to see his old friend, the grizzled Hell’s Kitchen priest from the first episode. I wouldn’t want to live in Hell’s Kitchen for many reasons, firstly the amount of dark alleys is directly proportional to the amount of dangerous rampant crime and corruption, which is to say on every corner in the city. The second and equally valid reason is that any time you ask a person in Hell’s Kitchen a question, they answer with a fifteen minute parable. For example:

Matt: Do you believe in the devil?

Priest: Back in ’87 I was in Rwanda, ever been? Well I have. There was this tribe…

Forty-five minutes later it is revealed that yes, the priest does believe in the devil. Conversations in Hell’s Kitchen are a journey, not a destination.

Matt and Foggy and Karen continue to investigate Fisk. Anyone who is even tangentially related to the tenement building, the Russian bombing, the United Allied scam, or the dirty cop’s death have disappeared. The only lead is the woman who was with Fisk when he gave his press conference. Matt tracks down Vanessa at her art gallery and pretends to be a dorky blind guy trying to buy a painting to impress women at his apartment. Then Fisk shows up. Matt knows Fisk is behind all of the evil in Hell’s Kitchen. Fisk knows Matt is the lawyer that worked on Karen’s Union Allied case. It’s super tense. You can see Matt weighing the option of trying to get to Fisk right then and there. But he decides he can’t do it so he starts to leave. Vanessa asks if Matt’s changed his mind about the painting and he says he has to “consider the cost.” We’re not just talking about the cost of overpriced trendy art, we’re talking about the cost on your soul. The ever running dilemma behind Matt’s crime fighting. What is the cost of all of this? Well, to start Mrs. Cardenas ends up dead. Matt must decide if he doesn’t want to kill Fisk but has to or if he doesn’t have to kill Fisk but wants to. And that is how he ends up fighting ninja-Nobu, trying to track down Fisk and not miss out on another opportunity.

Of course, they don’t call him the Kingpin for nothing. Okay, actually they haven’t called him that yet at all but they will. Probably. Anyway, all of the was orchestrated by Fisk to both get rid of Nobu and Daredevil. Fisk shows up while the ninja, the ninja, the ninja’s on fire, we don’t need no water let that other sucker burn. Daredevil takes a swipe at him but Fisk has on some protective under suit armor. Then Fisk pummels him with double Fisk fists of fury. The frustrating thing is that he has ample opportunity to pull off Matt’s mask but he never does. I know he is a rage-maniac and probably not so strategic when he is boiling over like that. If it were me, I wouldn’t even want to beat him up. I’d just want to know who he is, because life is really all about the mysteries around you and if you can solve one, like who is this masked man destroying your life, then it makes your day a little bit more beautiful, like a real slice of heaven.

Matt’s about to be shot by Wesley, Fisk henchman numero uno but he manages to dive out of a window and swim to safety. Foggy has been looking for Matt and shows up at his apartment when he hears something inside. He finds his way in through some magic roof door and sees…the masked man of Hell’s Kitchen crumpled into a near-death ball and discovers it is his old law school roommate and buddy Matt Murdock who has been “terrorizing” the city. Up to now, Foggy has been very anti-Daredevil. When Matt wakes up, he’s all patched up from an off-screen visit by Claire, but has to deal with the wrath of his friend who has many, many questions like “ARE YOU REALLY EVEN BLIND?!?” Foggy has a point, how can he trust Matt after he was holding out on him like this. The thing I don’t get is why he has such a hard time understanding Matt’s “abilities.” This is a world in which the Hulk has a massive fight in Harlem and Foggy has made a Captain America joke in another episode so all these other people with powers or enhancements or whatever way you want to reference them all exist out in the open. Foggy’s anger at the lies makes sense. Foggy’s inability to be like “oh, so you’re like all the other famous heroes we have” doesn’t. But we get to see Foggy and Matt meet and become friends in college, cement their relationship when they agree to be “avocados at law” (because Foggy doesn’t speak Spanish so that’s how he pronounces “Abogados”—a very good joke), and why they didn’t take the full time job at the morally bankrupt Landman-Zack firm where they interned. In now-time, Foggy walks out on Matt, too hurt to hear anymore. Later, Claire also walks out on Matt because it hurts too much to be with a man who she has to sew up every time they meet up for a date.

Fisk meets up with Madame Gao because at one point they had a very strong team of co-conspirators and now basically everyone is dead from Fisk’s plotting. Fisk asks Madame Gao a question, which is a major mistake because Hell’s Kitchen so she has to give her answer and basically goes into Christopher Walken’s inspiration speech from Catch Me If You Can:

Fisk: Do you trust me?

Madame Gao: Two mice fell into a cup of cream. One gave up and drowned. The other tried so hard to survive he churned that cream into butter and walked out…my son the birdman, where you flying to tonight…

Gao can see that Fisk is different. Being in love with Vanessa has changed him. He used to only love the city, or like he loves the city but he’s not IN love with the city. Or he loves some of the city but wants to kill all the poor parts. Something, he loves something called Hell’s Kitchen but it was the actually the name of the hammer he used to hit his dad in the head and nobody realizes and then he dies and they burn it. Anyway, Gao tells him he needs to choose what he loves because if he doesn’t, fate will. And she is right because at a huge fancy Fisk-benefit, a bunch of people are poisoned, including Vanessa. They suspect the culprit was going after Fisk but nobody knows for sure who it was or why they did it. Fisk spends a lot of time moping around the hospital, losing his chill swearing vengeance at hospital machines.

Wesley steps up to take care of business. He sends Leland to talk to Gao and make sure it wasn’t her that did the poisoning. He gets a call from Fisk’s mom that Karen went to visit her. Karen found out that she was still alive and tricked Ben Urich, the newspaper man, into coming with her to the nursing home she is hiding out at. They find out the story about young Wilson Fisk going hammer time on his dad’s head. Wesley puts it all together and leaves without telling Fisk where he is going. Karen had confronted Matt about his “accident” when she went to go over there to tell him the news about Fisk’s past. I’m not even sure how Karen has a relationship with Matt since every time she’s out with Foggy, Matt is doing his Daredevil thing on the city. Matt and Foggy aren’t speaking because of the Daredevil revelation and Karen wants to know why everything is falling apart but doesn’t get any answers. Then Wesley gets a hold of her and takes her to an abandoned building. She thinks he’s going to kill her but instead he offers her a job. Wesley is not a good kingpin. He had already tried to buy off Karen to no avail, so why he thinks this ploy is going to work is beyond me. Perhaps he so believes in what Fisk is doing, he is blind to how dumb he is being. Karen manages to get his gun and puts several bullets in him in what is the most satisfying moment of the show (which I am really enjoying, that’s how badass Karen’s going gangster is!). She says this isn’t the first time she’s shot someone and I want to know more, I need to know more.

Fisk calls Wesley but he dead. And because Wes tried to handle this on his own, Fiskpin has no idea that Karen found his mom. Matt meditates himself healed and goes off to find Fisk’s secret knife-proof material. He tracks down Fisk’s tailor and propositions him to make a suit by promising to take Fisk out of his life. We will probably be seeing some red latex soon, which is fine by me. This Dread Pirate Roberts look just isn’t cutting it anymore. It’s time for the Daredevil to be a symbol. It’s time for him to take his city back. It’s time for someone to call Fisk the Kingpin already. I only have one question…do you have 45 minutes to provide me with the proper answer? 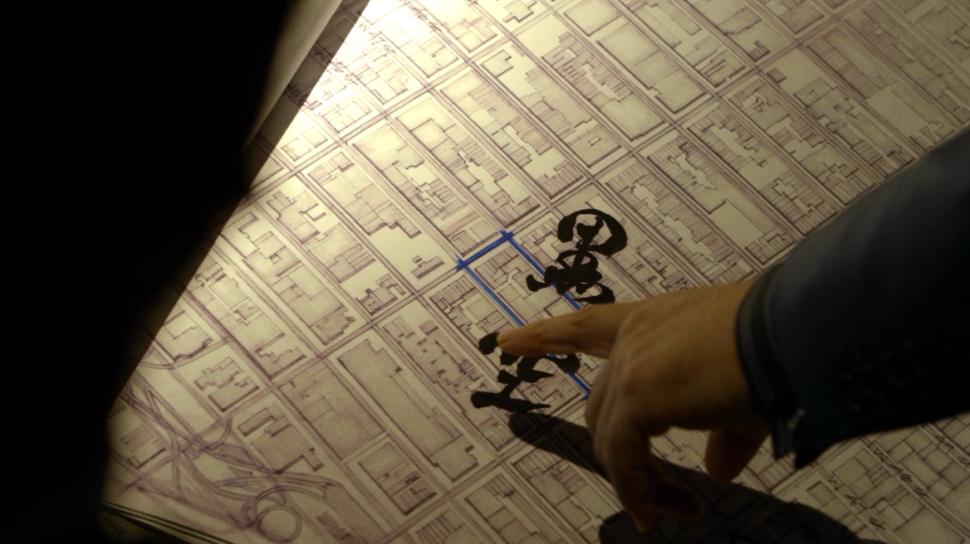