Mayor Bill de Blasio maintained that his trip tomorrow to the nation’s capital to unveil “The Progressive Agenda to Combat Income Inequality” with other leading liberals is important and appropriate to his duties as mayor, despite complaints that he is neglecting the bread-and-butter issues of every day New Yorkers.

Talking to the press today after an unrelated event in Queens, Mr. de Blasio defended making a two-day jaunt to promote his left-leaning ideals in Washington D.C.—viewed as a move to elevate his personal profile nationally—while making only infrequent visits to conservative enclaves of his own city, such as Staten Island. He asserted repeatedly that part of the trip was to call for the renewal of federal transportation funding, which is due to expire at the end of the month, as well as lobby for other policies such as progressive taxation reduce the gap between rich and poor.

“I can’t think of anything more important. I’ll be doing that over the next couple of days because now is the right time to do it,” he said, noting that many criticized his ambitious agenda as a mayoral candidate in 2013 as beyond the reach of a mayor. “We need a federal partner. And we are going to create, I think, some real critical mass tomorrow pushing for these bigger solutions in Washington.”

Mr. de Blasio argued that mayors since his hero Fiorello LaGuardia—whom he said he sought to emulate in his own “humble” way—have rallied with their counterparts from other cities to request federal money for urban concerns. The transportation bill push, he said, was simply part of that tradition.

“We have a real bipartisan effort with mayors from across the country on Wednesday, working with the business community, working with chambers of commerce from around the country, working with folks, businesses depend on better transportation, to push the Congress for more funding,” he said. “Let’s face it, where so much of the energy is, where so much of the resources are, they’re in Washington. The situation now in Washington is unacceptable. It’s not helping New York City, it’s not helping cities across the country. We’ve got to break through in some way.”

“We’ve got to change the dynamic so we can get the federal support we need, and we’ve got to do the work here every day, and my job is to do both,” he continued.

Mr. de Blasio’s approval rating has long hovered around 50 percent and is racially polarized. He is still popular with black voters but increasingly unpopular with whites.

Nonetheless, Mr. de Blasio will seek to take a national leadership role when he joins top liberals like Massachusetts Senator Elizabeth Warren and Nobel Prize-winning economist Joseph Stiglitz in unveiling a left-leaning agenda for the nation on Wednesday. He has maintained, however, that rumors he will launch a long-shot bid for the presidency next year are false—rumors he denied again today.

“No,” he said resolutely. “I said I have one job: mayor of New York City. I look forward to running for re-election in 2017.” 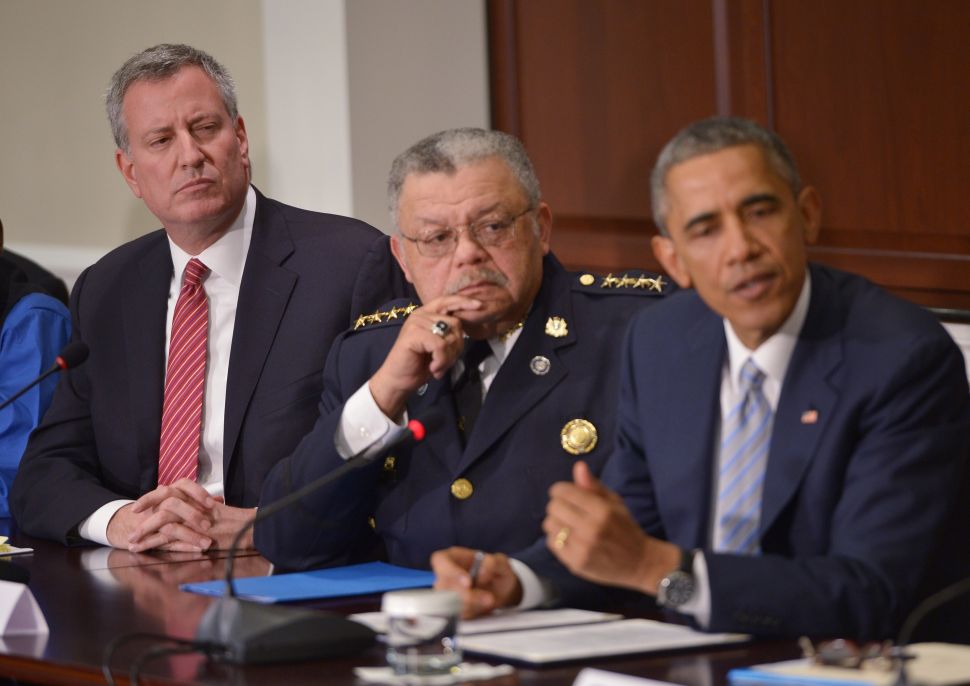