WASHINGTON, D.C. — Mayor Bill de Blasio today asked elected officials and candidates across the country to “stiffen their backbones” and get on board with what he dubbed the Progressive Agenda.

“We’ll be calling on leaders and candidates to address these issues, to stiffen their backbones, to be clear, and to champion these progressive policies,” Mr. de Blasio said as he stood under a blazing sun outside the U.S. Capitol with members of Congress, labor leaders and activists.

The liberal re-imagination of former Republican House Speaker Newt Gingrich’s “Contract with America,” Mr. de Blasio’s plan represents a significant effort to raise his profile, which has been decidedly lower than the billionaire mayor who preceded him. Mr. de Blasio this morning spoke about income inequality at the same forum as Sen. Elizabeth Warren; he’s previously taken his message to Nebraska and Iowa.

Today the mayor and his assembled team of progressives unveiled a 13-point pact that includes nationwide passage of some things Mr. de Blasio has done at home in New York—paid sick leave and universal pre-Kindergarten among them—and some things that he has so far failed to do, like increasing the minimum wage to $15 and indexing it to inflation.

Asked how he intended to do nationwide what had yet to happen in New York, Mr. de Blasio pointed to the success of minimum wage increases at the ballot box in four “red states” in 2014, and the movement to pay fast food workers more.

“A lot is happening on the ground. I’m very hopeful we’re going to get change on this issue in Albany. I think the people in New York State are demanding a higher minimum wage,” Mr. de Blasio told the Observer during the press conference.

Then, there were the things Mr. de Blasio and other mayors simply can’t do on their own, like closing the carried interest loophole in national tax law, or implementing the “Buffet Rule” to ensure secretaries don’t pay more in taxes than the CEOs for whom they work. Unlike Mr. Gingrich, Mr. de Blasio does not command a majority in the House of Representatives. Whether federal lawmakers—and presidential candidates like former Secretary of State Hillary Clinton, whom Mr. de Blasio has not endorsed—get behind his agenda remains to be seen. But several bold-faced names of his own state’s federal leadership, including Senator Charles Schumer, poised to lead the Senate’s Democrats, were not on the list of people signing the platform.

“There’s been a tremendous response, and I think it indicates that a lot of people who work in this building are looking to join a coalition to make a change at the fundamental level of our politics. Here’s the problem, you heard it from a lot of them: they can’t change the policies in the current political environment,” Mr. de Blasio said when asked about lawmakers who hadn’t signed on. “We’ve got to change the basic political debate.”

Among those in attendance were one-time presidential contender Howard Dean, U.S. Sen. Jeff Merkley of Oregon, New York Congressmen Charles Rangel and Jerrold Nadler and Congresswoman Yvette Clarke, Michigan Congressman John Conyers, and progressive standby Rosa DeLauro of Connecticut—who lauded both the mayor and a Senate vote to block the fast-tracking of the Trans Pacific Partnership, with opposition to trade deal among the planks of the day’s platform.

The platform was also notable, perhaps, for the the things that simply were not in it—including any mention of police or criminal justice reform, issues that have dominated national headlines. Rev. Al Sharpton, who appeared with Mr. de Blasio today, said the progressives who signed up for his platform don’t all agree on everything, including what should have been included.

“When Mayor de Blasio had contacted me, I had some concerns, because I’ve seen progressive groups come and go, but because of his leadership, and the ability of saying that we can have unity without uniformity, I said that I wanted to work to set what is the goal post for where this nation need to go,” Mr. Sharpton said.

But if the goal post is set, he said, they can continue to differ a bit on the best plays to get to the end zone.

“In New York, we’ve had debates on police. You would think from the right wing that Mayor de Blasio and I are twins,” he said. “Sometimes we’re not even in the same crib. But the goal is to protect people and police.”

Mr. de Blasio said an issue like mass incarceration is “exceedingly pertinent” to income inequality, and that the agenda wasn’t quite done yet.

“We are going to go back to the coalition literally starting tomorrow and add a couple of the pieces, obviously with the agreement of coalition members, that people have said they thought would be very important to include,” Mr. de Blasio said.

Anna Greenberg, a Democratic pollster who polls for Mr. de Blasio and several other big-city mayors and mayoral candidates, said it was at the municipal government level that people’s lives are impacted.

“That’s where most of the progressive energy is,” Ms. Greenberg told the Observer after Mr. de Blasio’s morning remarks, which she attended.

But can the progressive energy spread to the federal government in the way Mr. de Blasio intends with his progressive platform?

“Think about how social change happens, especially on hard issues, it usually comes from the bottom up. And I think it’s particularly true because of the dysfunction in Congress,” Ms. Greenberg told the Observer, citing issues like gay marriage and marijuana decriminalization that start at city levels before spreading to state level and beyond. “We have a dysfunctional national government that can do nothing. Think about guns—cities are leaders on guns. So all of these kinds of really hard progressive issues actually start in cities, they make it statewide, and then you start seeing national change.”

Despite the focus on federal issues, Mr. de Blasio today remained dogged by local ones. He was asked repeatedly about crime back at home in New York City, including a hammer attack today and a report on the upswing in the murder rate. And he was heckled, repeatedly, by horse carriage drivers who traveled to Washington to accuse him of abandoning working class New Yorkers with his effort to ban the industry.

While New Yorkers are split on whether his travel is any good for them—and his approval rating is at an all-time low—Mr. de Blasio again defended his national efforts today.

“I think it’s obvious that the issues we’re taking about have an impact on the people of New York City,” Mr. de Blasio said, regarding issues like poverty. “The ways we address that involve national policy. We can do a lot at the local level and we’re trying to do it, with affordable housing and increasing paid sick leave and living wage, a lot of other measures, but we need national policy to change.”

“People are asking questions—who does Mayor de Blasio think he is to be pulling all these folks together? He’s a mayor,” Mr. Jones said. “I want to say very, very clearly: a mayor in the middle of a national security crisis, Giuliani, brought this country together and led as America’s mayor. We are now in an economic security crisis. It is highly appropriate that America’s mayor bring us together again. Thank you Mayor de Blasio for your leadership.” 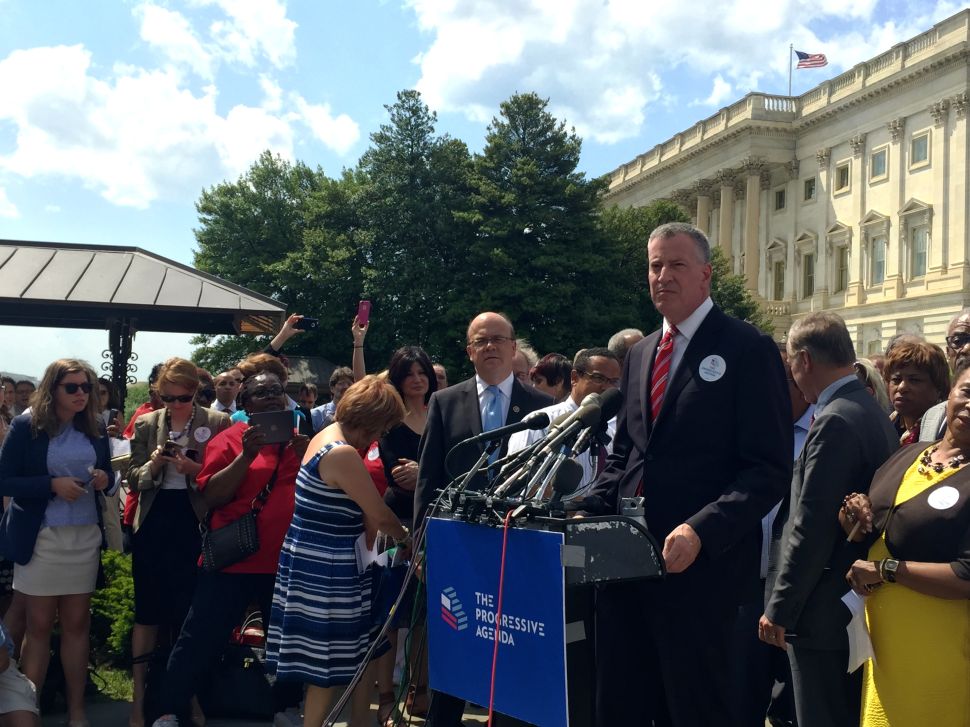