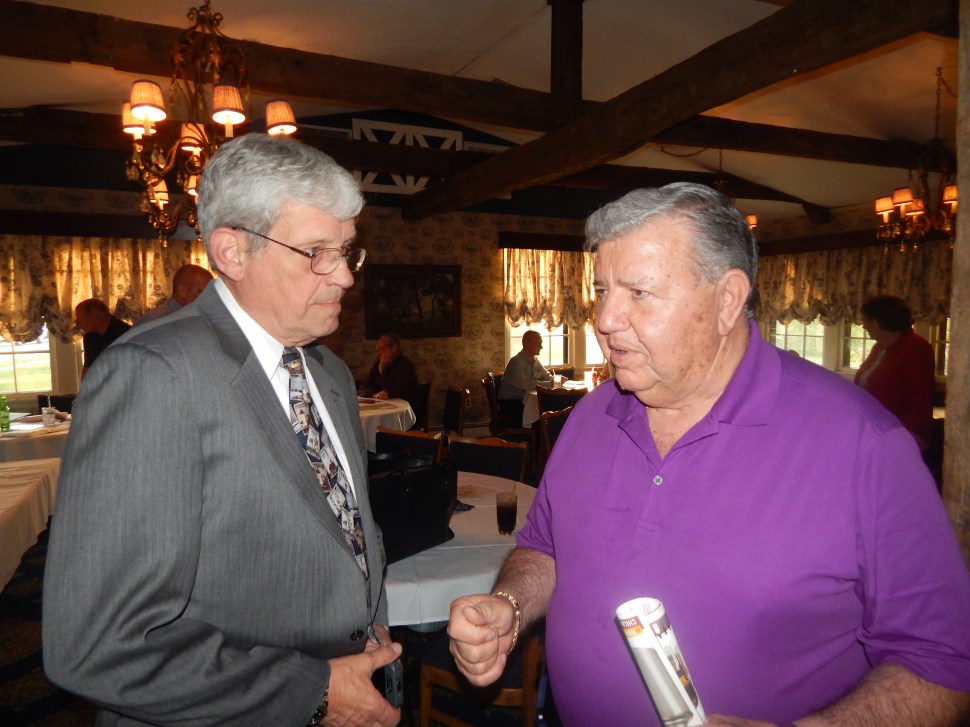 So this is where it started, at sedate events like this under wooden colonial crossbeams – for Gov. Chris Christie – who once occupied a chair on the Morris County Freeholder Board before losing reelection, only to later improbably vault to political super-stardom and Bridgegate aftershock, a stunning arc far removed from these one-term freeholders staring at a countywide landscape and aiming at another term. 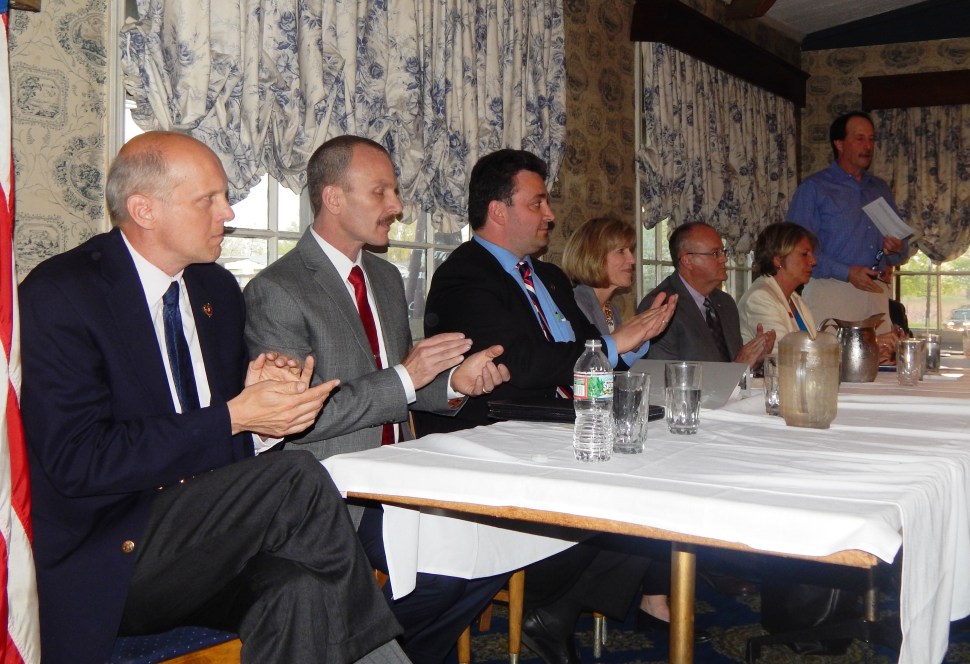 Seven candidates – three of them incumbents, split apart by politics – are trying for three seats in the June Republican Primary and tonight they occupied a table in the Lamplighter at an event hosted by the local Republican clubs where the wall mounts might as well include the head of a Democrat or two in this deeply red-hued county.

A tan and friendly state Senator Tony Bucco, Sr. (R-25) was a central paternal figure in the room. “I’m not supporting anyone,” said 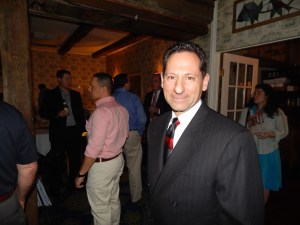 The best name in NJ Politics? King Penna was in the house.

the colossus, who grasped the outstretched hand of former Assemblyman Dick Kamin – one of a handful of consummate GOP insiders from this area whose faces drizzled the Revolutionary War-era room.

PolitickerNJ glimpsed former Assemblyman Guy (no relation to Assemblywoman Maria Rodriguez Gregg) Gregg and up front, and a 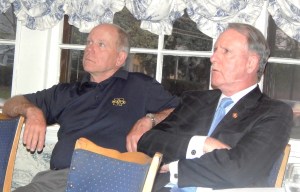 double breasted suited GOP operative King Penna entered the Lamplighter in the company of LD7 perennial Republican Primary challenger Dave Larsen. The latter immediately began working the room with a crunching handshake. An insider grabbed PolitickerNJ’s ear and complained that Penna – who’s with the team of Freeholder John Cesaro – is using the freeholder contest as a 2015 runway to vault Larsen back into a dogfight (for the fourth time) with incumbent U.S. Rep. Leonard Lance (R-7) come 2016.

Sheriff Ed Rochford was in the room.

But for the moment, the freeholder candidates (see more on the back story here) dominated in this northern county of 450,000 people with a $328 million budget.

The Morris Conservative Team consisting of…

Incumbent Freeholder John Krickus of Washington Twp, a Marine who grew up in Madison;

Incumbent Freeholder David Scapicchio , the former mayor of Mount Olive who runs a contracting business with his sons;

and Deborah Smith, a 20-year veteran of the Dneville Council, an NRA member and daughter of an NYPD cop. 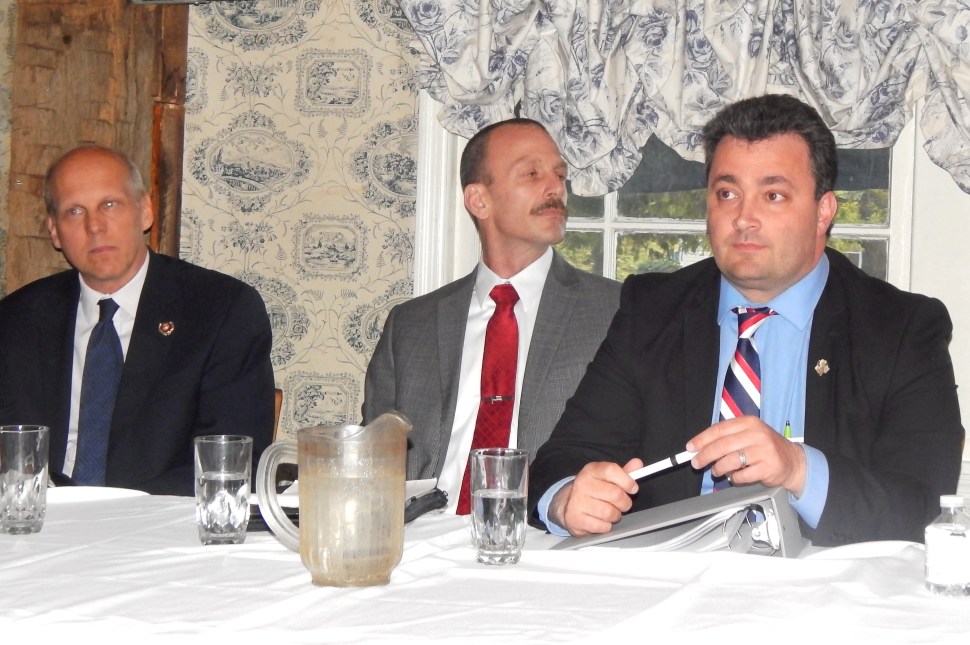 And the Republicans for Morris County Freeholder ticket consisting of

and Angelo Tedesco, a professional firefighter from East Hanover. 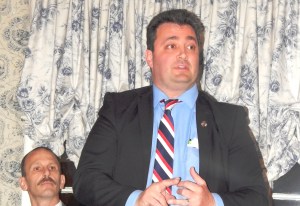 A seventh candidate, Tom Mulligan, is running unaffiliated with either of the two clashing teams.

Scapicchio did not attend the 90-minute debate but for the final 90 seconds, when the incumbent – who said he had been tending to county business -rushed in, sat down alongside Smith and gave a closing statement.

The candidates stayed away from the issue that produced a primary to begin with, namely the split between Cesaro and Krickus/Scapicchio. Throughout the debate when they were not speaking, Krickus and Cesaro sat in icy silence, the human blockade of Angelo Tedesco occupying the raging unspoken storm between the two onetime allies turned foes. 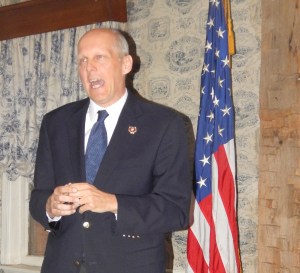 Tedesco got warmed up only once in the form of a blow torch at close range administered by Krickus. “We’re trying to find weaknesses and get a shot in,” acknowledged the freeholder through gritted teeth at Tedesco. “I know you don’t know all this, but just to correct you…” whereupon the incumbent proceeded to surgically outline a budget fine point. Seated at one end of a long table, a calmly focused Krickus repeatedly came around to the front of the table when it was his turn to speak, the only candidate to do so. “No tax increase in three years,” he said. “Reduced debt $30 million. Building roads not solar panels.” Best title after Dad he ever had in his life was Marine, he said at one point, seeming to choke up slightly before quickly fully recovering.

Also proud of his zero-tax increase record on the board, Cesaro argued his central point that Morris needs to create revenues for economic growth not new taxes, noting that the county will preserve its triple-A bond rating by budgeting for the future. “Zero [based budgeting] is wonderful,” Cesaro said. “If you do it with a plan you will protect your bond rating.”

There were no loose elbows. No malevolent glares or testy exchanges from hell. 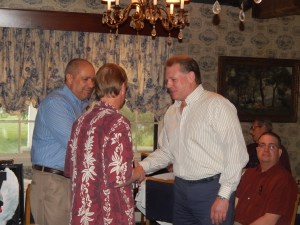 The Krickus team tried to define itself as more conservative by virtue of its opposition to a county solar power project, which Cesaro noted really came to a head before he arrived on the freeholder board, leaving him in the position of voting in favor of a counsel-recommended settlement. Little cutting undercurrents persisted on that subject. Trying to send a pragmatic vibe into the room that carried with it the suggestion of their rivals adhering too ferociously to ideology, Cesaro and his allies want negotiating not litigating, words chosen by Tedesco.

Roads not solar, Krickus reiterated, trying to emphasize the barest of bare bone government approaches in this GOP Primary.

Standing between two exclamation points, Mulligan tried to capitalize on his solitary position in the contest. “Let’s start working together and moving forward,” he said in his closing remarks.

Christie only came up once, when Smith spoke about the effort locally in Denville to keep spending austere, under the 2 percent cap imposed by the governor, that onetime, one-term Morris County Freeholder, whose countywide fate, at least, the warring Krickus, Scapecchio and Cesaro seek to avoid. 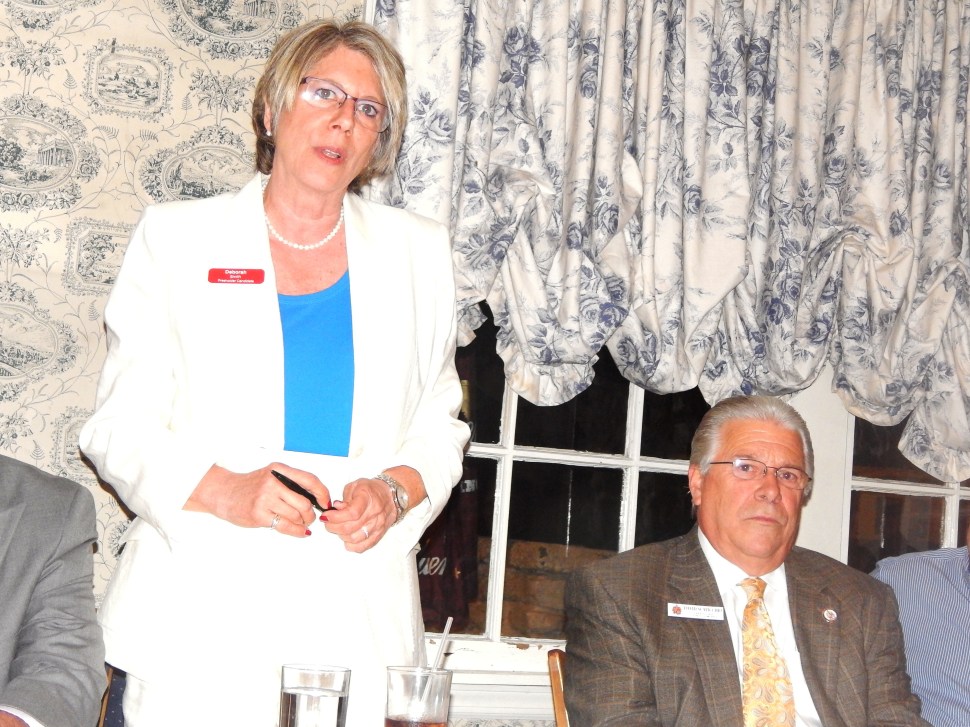 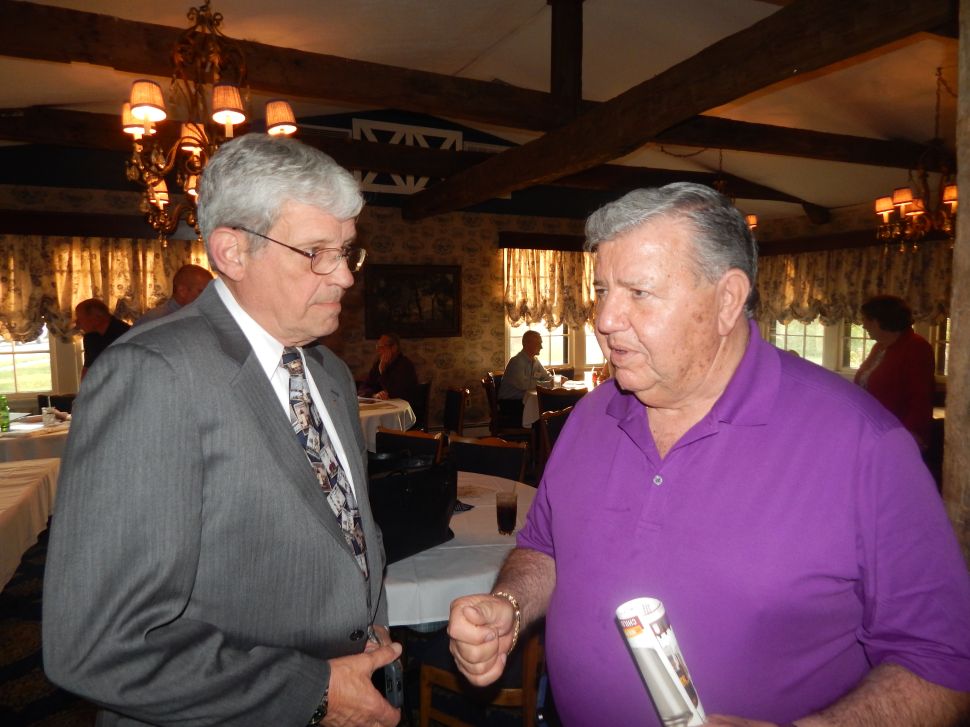