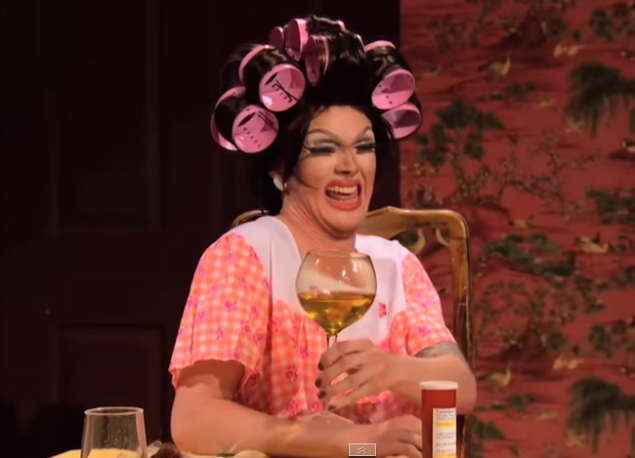 Every year the last werkroom episode is a mix of melancholy and excitement, and this season is no different. This time around it seems a bit sadder than most, possibly due to the fact that none of the queens left have very big personalities. Ginger might be the biggest character remaining but even she isn’t as over the top as Bianca, Alaska, Latrice, Adore or Sharon Needles. The vibe just seems quiet and dead. The final four have obviously given everything they’ve got to the competition and are exhausted by this point, running on fumes.

The challenge this year is the same as in seasons prior: The queens must act under several different personas; dance to RuPaul’s latest music video and come out in their best looks for the final runway. Given what the contestants have been through so far, there are virtually no surprises in the outcomes: Kennedy is the best in the music video, while Pearl does quite poorly. Ginger is the funniest actress while Kennedy falls behind. The final runways are hardly the best we’ve seen from each of the queens this season—with the possible exception of Kennedy’s lovely Pride dress, which was still more like a costume than a look.

Rather than the competition, it’s the moments when the queens dropped their guard that were the most memorable parts of this episode. It’s painfully touching both during their one-on-ones with RuPaul and, at the end, when they had to speak to their childhood photos. With the exception of Violet, the other three finalists all have very tough backstories. When Pearl looks at her four-year-old self and tells him he’s about to spend years where “people are going to f___ you up and take advantage of you,” it’s really quite harrowing.

The performances during this episode never seem to move the needle much. Both RuPaul, the producers and the audiences know each queen’s strengths and weaknesses, rendering the challenge largely moot. Kennedy was hardly the worst performer this episode but she had no chance of winning. Even the best pageant girl will never take home the crown, as the show has become quite creativity- and personality-driven from season three on.

Every year RuPaul makes it seem like the finals are razor-close and that it’s anyone’s game. Every year, this has pretty much been untrue. My favorite moment to the contrary was Ru’s assertion that because Roxxxy Andrews flipped her hair well in the music video challenge, that meant she was in the running for the crown. Bitch, please. This year, however, is a very different story. We really do have a wide open race.

There are strong cases to be made for all three finalists. Let’s start with who seems like the least likely: Pearl. Until last week, I’d been under the operating assumption that Pearl was the most likely winner by far. Every since the show switched to a live finale in season five, RuPaul has consistently awarded the crown to the fan favorite. It makes sense; Drag Race is a product, after all. Why not give the customers what they want? By that logic it seemed that once Pearl got to the end, her huge popularity would put her over the top.

Now I think that’s improbable. Pearl’s performances during the final four episodes have all been quite mediocre, something which has never happened with an eventual winner. Worse, when Kennedy mocks her dancing style this episode (“Pearl, smash!”) the editors very “helpfully” put together a side by side by side montage to validate what Kennedy was saying, effectively having the show itself agree with the shade. This seems like a glaring red flag that Pearl is being set up to lose.

Ginger is the next most likely to win. As she herself put it in her runway speech, the show has never had a “big girl” winner and such a victory theoretically seems past due. But even though the Minj is quite funny, she isn’t quite that funny. In fact some of the show’s funniest queens were the ones for whom humor was secondary, such as Raven, Detox and Willam. Another strike against Ginger is the fact that we had a comedy queen win last year. Can anyone claim that Ginger is at the same level, humor-wise, as Bianca?

Finally we have Miss Least Likely to Succeed—but most likely to win. It seemed like Violet was so off-putting that she was headed for the Phi Phi/Roxxxy finale spot, wherein crowning her would cause glitter-riots in the streets. But all that changed in the end, and how. While Violet might not have gotten particularly more humble, it is apparent to everyone that her often-abrasive personality doesn’t come from a wicked place. Further, she has never been in the bottom two despite sometimes struggling with challenges outside her comfort zone. Finally, she has consistently given superb runway week after week. If there’s a case to be made for Violet, it’s as simple as her genuine fangirl reaction to last week’s Katya/Kennedy lip sync. In that moment she really showed herself as one of us, not just a performer. She already holds her head quite high; might as well pop a crown on top. 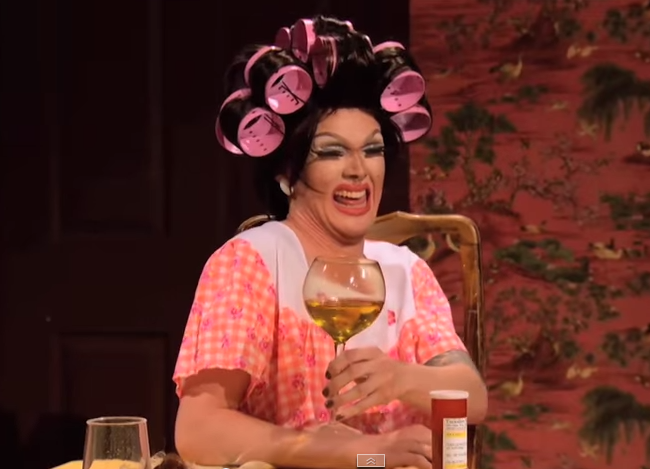