If you missed last night’s season finale of The Flash, well, what can I really say? You missed a guy running so fast that he tore the universe and time itself open, creating a worm hole into different dimensions and introducing countless alternate timelines of human history. That…is pretty much CW’s The Flash in a nutshell right there. You accept that sometimes they’re going to throw fake science at you, and an occasional psychic gorilla, and you hold on for a very fun ride.

Oh, and Barry Allen got a chance to say goodbye to his mother last night, but I missed that scene because someone was chopping onions in front of my TV. I hear it was emotional.

We didn’t cover the entirety of season one of The Flash, but it was an inspired, occasionally great, occasionally cheesy take on what it means to be a comic book show, far less moody than its neighbor Arrow and even less nonsensical than Fox’s Gotham. Yes, I repeat, the Flash literally ran backwards in time and it still made more sense than whatever Fish Mooney was doing on that island.

The fun thing about tearing open the universe via advanced jogging is it allows the opportunity for numerous nods to the distant past and far future of DC Comics history. Since we did one of these for the very first episode, let’s do one for the finale —here is each and every Easter Egg from ‘Fast Enough.’

Cisco and his love of Douglas Adams 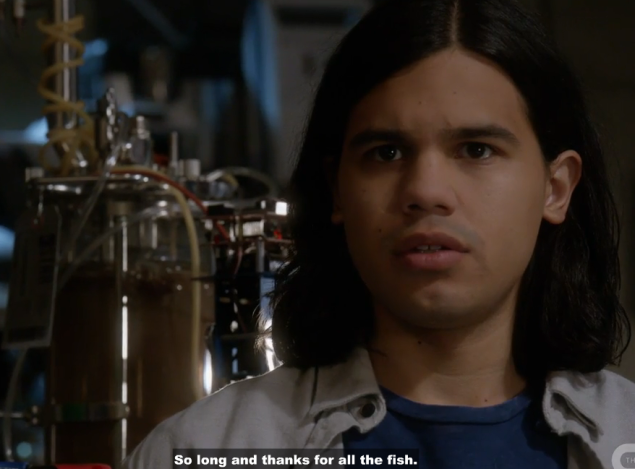 When presented with the possibility of the world as he knows it being sucked into an endless black hole, Cisco utters the line “So long and thanks for all the fish.” Which, okay, I’m not sure how I would react either. But that phrase also just happens to be the title of the fourth book in Douglas Adams’ Hitchhikers Guide to the Galaxy series. And really, is it any surprise Cisco is a Douglas Adams fan?

But as it turns out, unlike me, quoting 1980s science fiction is not Cisco’s only super power. Wells lets Cisco know that he was also affected by the particle accelerator explosion, which apparently gave him the ability to “see through vibrations in the universe.” This is probably the next step in Cisco’s transition into Vibe. CW should be aware that the only way to do Vibe justice is to keep this costume exactly the same. 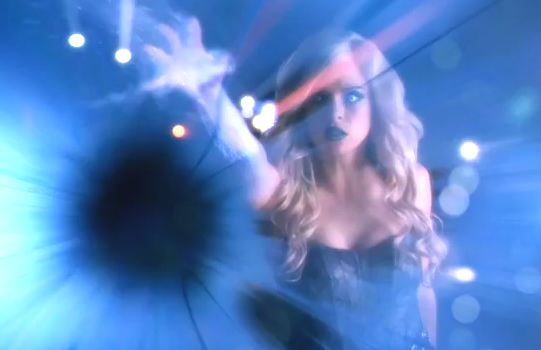 While running through the Speed Force (ironically the new name for my 2004 Toyota Corolla) Barry Allen is afforded glimpses into all kinds of wonky alternative universes, most of which happen to preview the CW’s upcoming series Legends of Tomorrow. CW must be pumped about that happy coincidence.

One of the first things he sees is Caitlin as Killer Frost, a transition you may have seen coming due to the fact Caitlin’s last name is Snow. Subtlety, baby. Interestingly enough, besides being by far the worst character in Injustice, Caitlin as Killer Frost is much more villain-esque than Caitlin as Caitlin. Most likely this is just one of many alternate timelines, or Caitlin eventually just realizes the ability to produce ice daggers is more conducive to a life of crime than a life as a simple scientist. 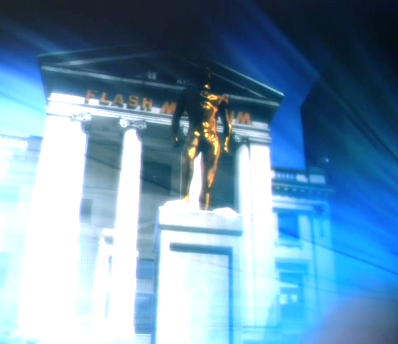 Barry also gets a glimpse of the Flash Museum, an exhibit to all things Flash that’s been around in the comic books since 1965. Popular sights include a Cosmic Treadmill and a villain stuck in paralysis disguised as a statue. Fun stuff.

The Flash Museum is dedicated not only to Barry but ALL the Flashes (there have been many), and a statue was erected outside the museum after the death of the fourth, Bart Allen (Barry’s grandson). So, technically, when Barry spies that statue up there he might be looking at the likeness of his dead grandkid, and that is so sad. 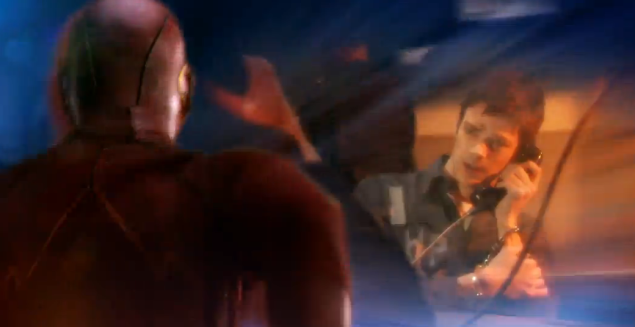 On the other hand, there’s also a universe where Barry is in jail. Dead grandkid or incarceration? So many fun choices. 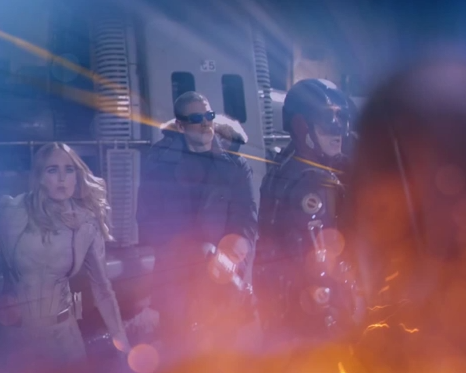 We get a real quick glimpse of White Canary, Captain Cold and Atom teaming up in Legends of Tomorrow, which I find funny because the footage Barry runs past is literally just footage taken from the actual trailer. 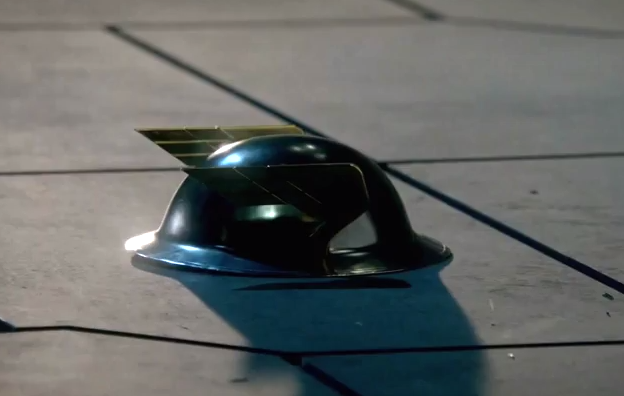 This fancy hat that came flying out of the Speed Force belongs to none other than Jay Garrick, the OG Flash from day one, back in 1940 when that metal hat would have made sense. Exciting, yes, but I can’t get the image out of my head of Jay Garrick minding his own business when a worm hole sucks his hat and only his hat right off his head.

Rip Hunter and the Time Sphere 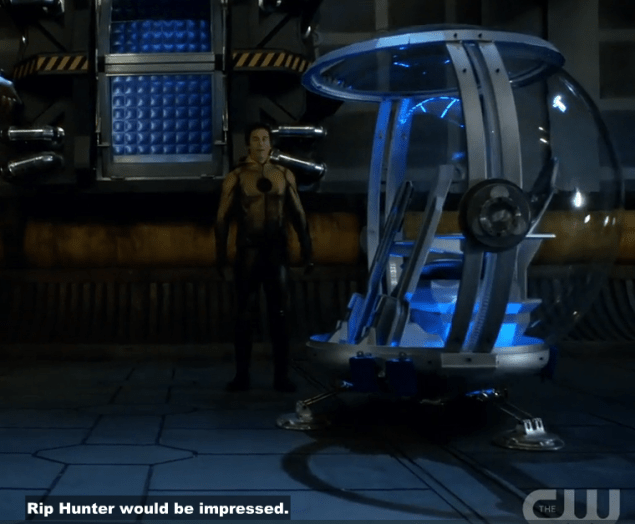 Flash and Co. build a Time Sphere (ironically my new new name for my 2004 Toyota Corolla) for Wells to take back home. Wells remarks that “Rip Hunter would be impressed.” Rip Hunter, as you may have already guessed, is a time travelling vagabond, inventor of the first Time Sphere, and an integral part of Legends of Tomorrow. As much as I loved this Flash finale, I think I also just got duped into watching an hour long commercial for Legends of Tomorrow. 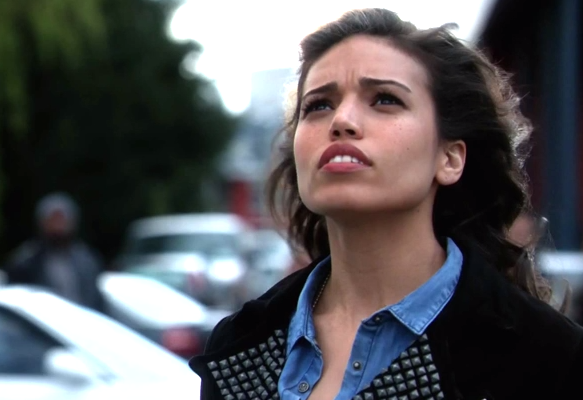 Which brings me to my next point. One of the people gazing up at the worm hole in the episode’s finale (instead of running screaming in the opposite direction) was Kenda Sunders played by Ciara Renee. Kenda will eventually take up the mantle of Hawkgirl in Legends of Tomorrow, a transition which requires exactly one more set of wings and a big-ass mace to complete. 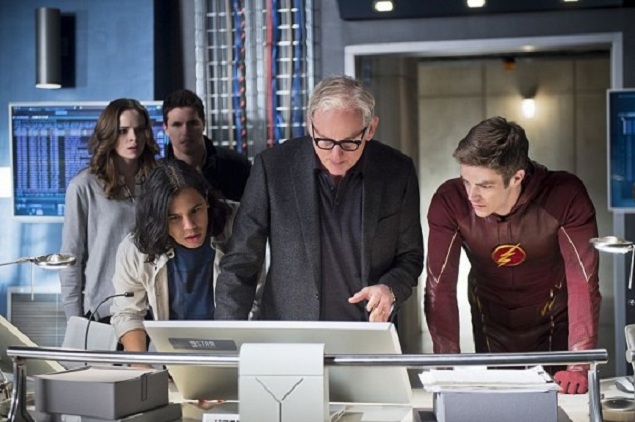