Last week was Derek Shepherd’s farewell episode. We saw him heroically save the lives of a handful of people injured in a car accident, and we watched as he made zero effort to move his car out of the road before he was hit by an oncoming truck. He was brain-dead by the time Meredith made it to the hospital, said her goodbyes, and pulled the plug.

This week was something different. So many Grey’s episodes take place over a single day, or a few days, that I was expecting a long, slow meditation on Derek’s life. Gradually over the two-hour special, each character would learn the news and cry a lot. (Remember how long it took for everyone in the town of Twin Peaks to find out about Laura Palmer’s death? I was thinking it would be that, basically, minus Dale Cooper.) The last act of the episode would feature a very dramatic and poignant funeral sequence, featuring cameos by former cast members. Finally, in the last scene, Meredith would tuck her children into bed and realize that her life must now find a way to go on. That was my mental image going into the episode, and—based on the fan responses last night and this morning—that’s what most people were expecting it to be.

That’s not what happened. Last night’s episode takes us through the first ten or so months of life after Derek. When someone dies, every holiday in that first year feels significant; following that structure, the episode checks in with Grey Sloan Memorial at Easter, the Fourth of July, Halloween, Thanksgiving, Christmas, New Years, and Valentine’s Day. In that time, Meredith runs away to San Diego with the kids, dodges Karev’s frantic calls, has a baby (it’s unclear at exactly what point she realized she was pregnant, but the audience doesn’t know until she goes into labor), and moves back to Seattle where Auntie Amelia helps her wrangle her growing family. Meanwhile, Owen and April run away to study surgical techniques in the military, Richard gets engaged, Amelia buries herself in gallows humor and buying (but not taking!) black market oxy, Bailey and Ben debate living will arrangements, Wilson becomes really good at her job, and Callie and Arizona continue to be divorced. It’s an important year filled with milestones, and the milestones are all we see.

I’m going to voice an unpopular opinion here and say that I actually liked this episode. Yes, the time jumps caused some serious storytelling problems, particularly in Meredith’s case: Why San Diego? Why didn’t she tell anyone? Did she have a job there? Were the kids in school? Where were they living? How did she take care of herself while pregnant? We’ll probably never have answers to these questions, and that bugs me. But I’ll take those plot holes any day over a long, depressing season next year all about the grief process. It’s not that Derek will never come up again after this, but after a year of coping with the loss, our characters are now in a place where, slowly, they can begin to actually move on.

I think this episode sacrificed good storytelling in favor of allowing the season to progress without being bogged down by death. And maybe this is because I am not a long-time Grey’s fan, so I’m not feeling a need to mourn Derek’s death myself, but I’m okay with this. There’s always something cathartic about episodes that deal with death authentically, but we don’t need that to stretch on forever. Grey’s had a choice here: the show could address Derek’s death in real time, over the next season or so, address the death for a few episodes and then forget about it entirely, or address the death thoroughly but concisely and then move on to new stories. By doing the latter, Grey’s acknowledged the painful realities of grieving and loss without making it the primary focus of the show from here out. That takes some skill, and it also takes guts to do something like this, knowing how angry the fans will be. But as understandable as that anger is, I think Grey’s made the right call.

As Meredith (and Ellis, in flashbacks) reminds us constantly, “The carousel never stops turning.” There will be new doctors, new patients, new relationships, new families, new children. The longer Derek’s storyline dragged on, the slower the carousel would move, until it screeched to a halt. That’s not the nature of life, and it’s not the nature of Grey’s. The show is fast-paced and unforgiving. It’s sentimental, but it doesn’t let those emotions stop the momentum. Derek is gone, baby Ellis is here, and the carousel turns and turns. We don’t yet know where it’s taking us, but we know that it’s not going to linger. 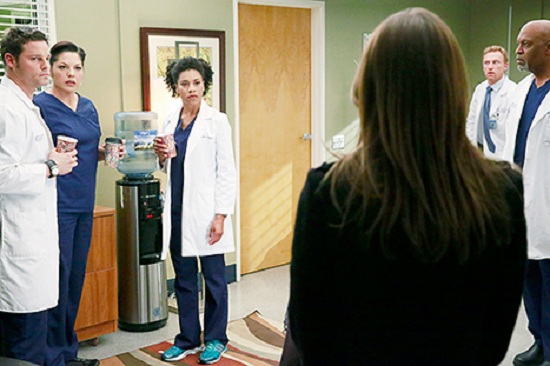