In 1971, Chris Burden asked a friend to shoot him with a rifle while standing only 15 feet away at the alternative gallery F Space in Santa Ana, California. Though Burden had hoped the bullet would simply graze him, it went straight through his arm instead. The performance, recorded on Super-8 film, was as much a critical moment for the artist’s career as it was the history of performance. Burden’s willingness to test the limits of his body set new boundaries for conceptual art.

On Sunday, May 10, Burden died at the age of 69 at his home in Topanga Canyon, California, according to the Los Angeles Times. He had been diagnosed with melanoma 18 months earlier.

“In some of the pieces I’ve set up situations to test my own illusions or fantasies about what happens,” Burden said in 1974 interview with Willoughby Sharp for Avalanche. “I knew it was dangerous, but I figured it would work out perfectly, the bullet would just nick the side of my arm. It didn’t work out that way, but it wasn’t a bad wound.”

For his 1972 work Deadman, Burden posed as the victim of an accident, covered with a tarp and surrounded by flares, on the street of La Cienega Boulevard. The piece came to an end when he was arrested for causing a false emergency and later tried in Beverly Hills, though the case ended up getting dismissed. Then, In 1974, the artist had himself nailed to the back of a Volkswagon Beetle for the work Trans-Fixed. With the car’s engine running at full speed—mimicking the sound of screaming—it was parked outside a garage on Speedway Avenue for several minutes.

Burden’s early work often explored themes of real, physical pain, interwoven with extreme situations of his own devise. He also played the instigator on occasion, as he did the 1972 performance TV Hijack, when he threatened the host of a local media show at knifepoint, and later destroyed the broadcast tape. Critical to his campaign of shock-and-awe, was the notion that only through experience can one really understand. Throughout his career, Burden played the role of artist and scientist, constantly searching for answers through wild experiments.

“It’s something to experience. How can you know what it feels like to be shot if you don’t get shot? It seems interesting enough to be worth doing,” he said to Sharp.

The line between fantasy and reality was one Burden trampled over constantly in his work. While his early performance works are legendary, his later sculptures have perhaps left the greatest mark, and delved into fantasy on a monumental scale.

A series of 202 antique street lamps, tightly arranged, are on permanent view outside of the Los Angeles County Museum of Art (LACMA) in the 2008 piece Urban Light, which has since become an iconic symbol for the city of L.A. LACMA director Michael Govan told the L.A. Times that “Chris’ work combines the raw truth of our reality and an optimism of what humans can make and do,” and that with Urban Light he “wanted to put the miracle back in the Miracle Mile.”

Other large-scale sculptures by the artist include his 35-foot-tall Twin Quasi-Legal Skyscraper, created for his 2013 New Museum retrospective “Chris Burden: Extreme Measures.” Also created for that show was the 4,000-pound hanging sculpture Ghost Shop, affixed to the museum’s facade. And his work Metropolis II (2011), a giant model city and kinetic sculpture, is on permanent view at LACMA.

The artist was the first to be represented by Gagosian Gallery when it opened in Los Angeles in 1978. A message displayed on the gallery’s website pays tribute to the artist, along with a quote by Burden that reads, “‘Limits’ is a relative term. Like beauty, it is often in the eye of the beholder.”

Chris Burden is survived by his wife, artist Nancy Rubins. 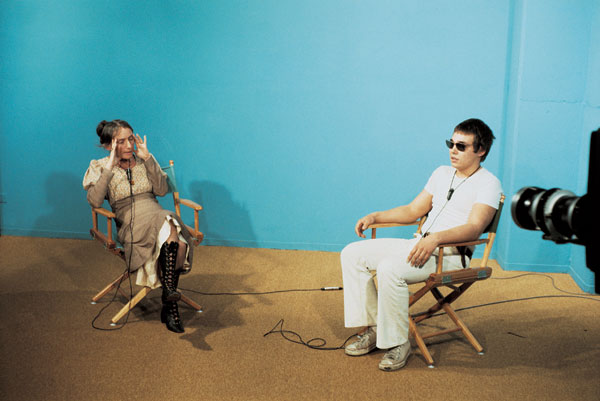