When academics first thought to flatter (or co-opt) rock and roll in the 1960s by deeming its most ambitious lyrics “poetry,” the rightly honored Bob Dylan famously used the term to praise the songs of Smokey Robinson. In the following decade, Patti Smith and a few others made the idea more literal, presenting poetry as a form of rock music before embracing the wider appeal of songwriting.

Then there’s John Cooper Clarke, the shades-and-suits-wearing wraith who has been England’s sui generis punk-poet for four decades, a deft declaimer of words both clever and foul in sardonic pieces like “Twat,” “Bronze Adonis” and “Majorca.” In the late ’70s, swept along by proximity, appearance and attitude into the coruscating vitriol of punk, he shared stages with the era’s top bands, including the Buzzcocks, the Fall, the Sex Pistols and the Clash. Among that company, he sang, memorably:

You ruin all the fun

You’re no use to anyone.”

Speaking by phone from England on the eve of his first full-scale American tour since Ronald Reagan was president, the 66-year-old admits, “I was too old to be a punk.” Until Joy Division and their ilk came along to open up new opportunities, the budding poet’s show business role was a job at a Manchester cabaret called Mr. Smiths, which presented, he recalls, torch singers and comedians. “I was a kind of compere (a host) … tell a couple of jokes and bring on the main acts.”

Like a refugee from Desolation Boulevard, Mr. Clarke—who at the time could have passed for a picture on the cover of Blonde on Blonde—came of age in a land bereft of hope, gripped in a failing economy and wondering where it had all gone wrong. Borrowing a phrase from Bob Dylan that conjured up “some kind of third-rate place,” he produced a litany of complaints, small and large, and titled it “Evidently Chickentown.” (In concert, “bloody” is generally replaced by a stronger profanity.)

“The bloody pubs are bloody dull

The bloody clubs are bloody full

Of bloody girls and bloody guys

With bloody murder in their eyes

A bloody bloke got bloody stabbed

Waiting for a bloody cab

You bloody stay at bloody home

Keep the bloody racket down

This is bloody chicken town.”

Mr. Clarke signed to Britain’s CBS Records in 1978 and released a handful of albums with wonderfully inventive music created by the Invisible Girls. “I didn’t know most of the musicians very well. I left that end of it up to [Joy Division producer] Martin Hannett.” Most of the players were members of a local bar band called the Dougie James Soul Train. “They were all quite accomplished musicians and not punky at all.”

But as a stage performer, with perhaps a dozen one-off exceptions, Mr. Clarke works solo, his breathless monotone too rhythmically energized for the comfort of a melodic bed. He digs potholes with his voice, filling them with bilious portraits of people, cities and society. In “Beasley Street”:

Sweethearts are physically sick every

If the words inspire a Google Maps search, don’t bother. “It isn’t a specific geographical location. It’s from the movies.” Mr. Clarke has often plundered B-movies for inspiration; in this case, it was the title number from 42nd Street, the 1933 Busby Berkeley showcase. “It ends with the line ‘naughty, gaudy, bawdy, sporty 42nd Street.’ So I just thought of a load of unattractive adjectives that rhymed with each other. Then I worked backwards, describing this awful place.”

Proudly armed with an honorary degree conferred by Salford University (which he never attended but which did once employ him as a lab technician), Dr. Clarke in the intervening years popped up in the strangest places: “Evidently Chickentown” ran over the closing credits of a 2007 Sopranos episode. He had roles as himself in the films Control and Ill Manors and did a TV commercial for frozen French fries.

In 2013, the Arctic Monkeys turned an oddly sweet Clarke entreaty called “I Wanna Be Yours” (“I wanna be your vacuum cleaner/breathing in your dust/I wanna be your Ford Cortina/I will never rust”) into a song on their double platinum AM album. It’s now a staple of English proposals and weddings. Singer Alex Turner told NME he was introduced to the poem—and Mr. Clarke—in school. “I was your typical teenager, trying to be cool and not interested, and the teacher proceeded to read ‘I Wanna Be Yours,’ doing an impression of Johnny. It was nothing like anything I’d heard.”

Mr. Clarke lost a decade to drugs and hasn’t made a record since 1982, but he is still creating. “I write more poetry than ever,” he says. “I’m not too interested in records.” A U.K. box set of his albums (none of which were ever issued in the U.S.) is due out this year, as is a book of the new poems he’s been performing of late.

With his lengthened diphthongs and broad A’s, Clarke’s delivery can be fluidly distended: “People mention meehr-duh, the moment you ah-rhaive / I’d considuh killing you if I thought you were ah-lhaive.” If his accent proves an impediment to winning over America, he has a solution in mind. Last year, upended by a visa problem that prevented a more extensive itinerary, he flew over for a single well-attended show in Los Angeles. “I spent a lot of time repeating myself.” This time, he reckons, “The easiest thing for me is to speak in American. Anybody of my age can do it. We grew up with cowboy movies, Kojak, you name it. What made the Beatles so big was that they sounded more convincingly American than anybody else on the British pop scene. To me the natural accent for rock and roll is American.”

John Cooper Clarke will perform at the Music Hall of Williamsburg on Thursday, May 7. 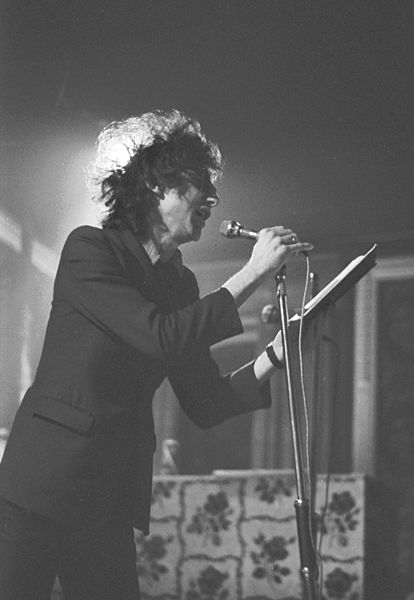