In January, two armed and masked Islamist gunmen forced their way into the Paris offices of the satirical newspaper Charlie Hebdo and murdered a dozen staffers—the deadliest terror attack in France since 1961. Almost inevitably, PEN announced that it would, at its annual gala, bestow the 2015 Toni and James C. Goodale Freedom of Expression Courage Award to Charlie Hebdo. To those of us who don’t spend our days in the politics of literature, that decision would seem like a no-brainer. To those who do, it created an opportunity to participate in the greatest literary dustup since Vladimir Nabokov and Edmund Wilson duked it out over Nabokov’s translation of Eugene Onegin.

In this corner, I give you Francine Prose, veteran novelist, frequent reviewer, visiting professor of literature at Bard, former president of PEN American Center—and one of six “table hosts” to withdraw from the gala. Why withdraw? “I couldn’t imagine being in the audience when they have a standing ovation for Charlie Hebdo,” she said. Unwilling to leave it there, she went on to mock the intellectual and moral bandwidth of PEN members who saw nothing more in the award than an expression of solidarity with Charlie’s surviving writers and editors: “Why is it so difficult for people to make fine distinctions?”

And in this corner, I give you Salman Rushdie, who was rewarded by the Ayatollah Khomeini for his novel, The Satanic Verses, with a fatwa calling for his assassination: “Just 6 pussies. Six Authors in Search of a bit of Character.”

The week before the gala, media kept a running count of writers who expressed their unhappiness with PEN’s choice: 45, then 100, finally 200. The six writers who withdrew (Peter Carey, Michael Ondaatje, Teju Cole, Rachel Kushner, Francine Prose and Taiye Selasi) were replaced by six writers (Neil Gaiman, Art Spiegelman, Alison Bechdel, George Packer, Azar Nafisi and Alain Mabanckou) who were unequivocal in their support for the award. (Gaiman: “The courage to work after the 2011 firebombing of the offices, the courage to put out their magazine in the face of murder… if we cannot applaud that, then we might as well go home.”)

While brighter minds dueled over lofty issues—did Charlie Hebdo, unlike classical satirists, “punch down” at Muslims, who are, the argument goes, an oppressed minority in France? Did the cartoonists bring their deaths on themselves with their attacks on a religion that has no sense of humor about its prophet?—I was thinking about my personal safety. Eight hundred writers, many of them Jewish, in one room: from the radical Islamist point of view, is that a dream target, or what?

A few days before the gala, Pamela Geller—a right-wing provocateur who recently failed to slather New York buses with anti-Muslim ads—staged an event in Garland, Tex. that produced exactly the headline-making result she craved: Two Muslims showed up to kill everyone and were rewarded with 144 virgins. At that point, PEN sent dinner guests an email about security precautions that stopped just short of full body cavity searches.

I wasn’t concerned that a jihadist could shoot his way into the Museum of Natural History, make a broken-field sprint through the displays and get downstairs to the Whale Room. But I felt PEN’s precautions missed the point, so I emailed Annette Tapert Allen, the co-chair of the gala (who happens to be my ex-wife): “My only worry is the Syrian busboy hired by your caterer.” Annette shared my concern with her colleagues and wrote back: “The busboy is Guatemalan.” (PEN drilled down and required government identification from everyone working at the event.)

Still, merely to think about my personal safety at a black-tie event in Manhattan put the issue of this award in a novel focus. For the first time ever, attendance at the PEN evening meant more than abstract “support.” It required me to do more than stand up and cheer—it demanded that I take a stand. It’s been decades since I was called to join others in a display of solidarity that presented even a modicum of personal risk. Exhilarating? Beyond.

There would be other highlights—Glenn Close introducing Tom Stoppard; Tom Stoppard noting that “PEN does not exist to promote some persecuted writers over other persecuted writers”; the award to Russian children’s book publisher Irina Balakhonova—but the heart of the night was Charlie Hebdo, and PEN President Andrew Solomon went right to the point. “The defense of people murdered for the exercise of free speech is at the heart of what PEN is.” And he noted an unintended consequence of the protest: this gala raised $1.4 million, 15 percent higher than any previous year.

There was, of course, a standing ovation for Gérard Biard, Charlie Hebdo’s editor, and Jean-Baptiste Thoret, its film critic. This is eye-rollingly corny, but as the Hebdo crew and their friends spoke, I began to feel that the dead were with us and that Charlie Hebdo was something more than a media product with a predilection for publishing offensive cartoons. And I found myself thinking of the late ‘60s, and the underground press, and what I felt when I was young and what I hope the young always feel: It doesn’t have to be this way.

As a general rule, when I see police, I recall what Jimmy Breslin once told me: “Security will make you weep.” Not this night. Passing men from the anti-terrorist unit, men with dogs, men in thick vests, I paused to thank them. And as I walked home, on a peaceful night, under a big moon, I had what felt like clarity. This issue, it wasn’t complicated. The award was for courage, not content. The freedom to write is an absolute. And then I wondered what it will come to mean to say, as I did, “I’m with Charlie.”

Jesse Kornbluth edits HeadButler.com. His novel, Married Sex, will be published in August. 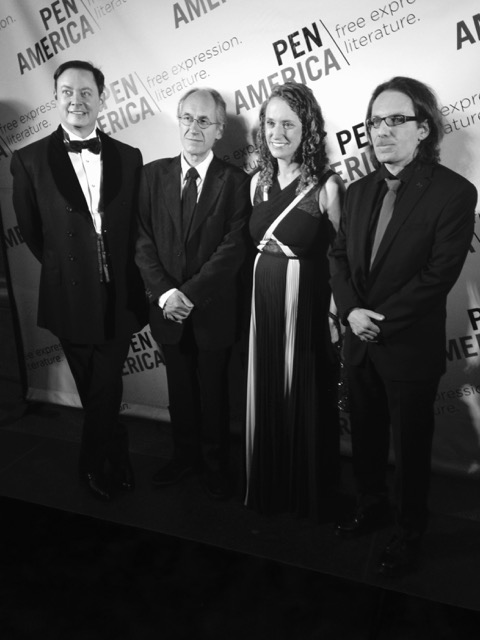