FORT LEE – On the day that David Wildstein pleaded guilty to a scheme to close access lanes to the George Washington Bridge in September 2013 as a way to punish Fort Lee Mayor Mark Sokolich, the mayor himself had an almost physical reaction to what took place.

“Today was a punch in the gut,” said Sokolich in a phone interview with PolitickerNJ on Friday after the first legal consequences stemming from the what has become known as the Bridgegate scandal first emerged. “You know what’s out there. You know what people are saying. You know what the emails are saying. You’re kind of expecting something like this. But when it happens, and you hear your name being said by the U.S. Attorney a dozen times and you read the indictment and see that it was intentionally done, it’s a horrible place to be.

The alleged involvement of senior gubernatorial administration and Port Authority of New York and New Jersey staff in the lane closures has led to accusations of political retribution against Sokolich, a Democrat, who did not endorse New Jersey Governor Chris Christie, a Republican, in the 2013 gubernatorial race. Christie has denied that any retaliation took place.

In federal court on Friday before U.S. District Judge Susan D. Wigenton in Newark, Wildstein, the former editor of this website, affirmed that he and Bridget Kelly – then the deputy chief of staff to Governor Christie and Bill Baroni, then the deputy chief of the Port Authority of New York and New Jersey, respectively – came up with the scheme as a response to Sokolich’s decision not to endorse Christie’s 2013 reelection. Attorneys for Baroni and Kelly denied Wildstein’s allegations on Friday.

Sokolich said on Friday that he had not heard from Christie, who memorably came to Fort Lee to personally apologize when the Bridgegate scandal first broke in January 2014. Christie was in Virginia, continuing to consider a run for the Republican presidential nomination in 2016.

Sokolich, still considering what legal moves his Bergen County borough might make once all the Bridgegate facts are known, would not comment on what the effect of Friday’s events will be on Christie’s political ambitions. Instead, he thought about how the litigious days ahead will affect Fort Lee, a place struck stagnant by an apparently intentional three-day traffic snarl in September 2013.

“I don’t know if we will call it damages, but we will certainly seek reimbursement. I hope that if any good comes from this, reforms are put into place to make sure that something like this can never, never happen again,” Sokolich said, alluding to the Port Authority. “It’s discouraging when reform is proposed and there is no action on it. If there was ever a time to incorporate and put into law reforms to make sure that this never happens again, now is as good a time as any. It’s baffling to me that these reforms are not garnering enough attention or support that’s needed for them to pass. I really don’t get it, but I still have hope.” 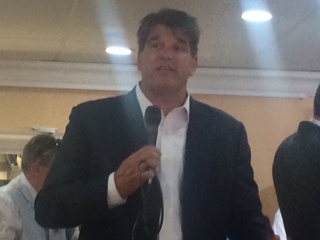