“I was struck by how utterly changeable and varying the cityscape appears depending on the time of day and the ever shifting light,” said Mr. Wilcox in an email to the Observer last week, as he readied his solo presentation for Gladstone Gallery’s Frieze New York booth.

Stills from the artist’s film, titled In The Air (2013), cover the walls from the floor up, giving visitors a sweeping view of Manhattan’s skyline from the magnificent perch of Mr. Wilcox’s former studio space atop a building near Union Square. The film was was shown at the Whitney Museum last year, before its move to the meatpacking district. The specially designed, panoramic installation has since traveled to the Grand Rapids Art Museum, where it goes on view to the public today, May 17, through August 30.

But instead of showing the film in its entirety at the booth (the entire 24-hour time lapse lasts about 35 minutes), the artist has taken segments of In The Air that best track the sun’s movements over the course the single day he filmed, from sunrise to sun set.

“I was struck by how utterly changeable and varying the cityscape appears depending on the time of day and the ever shifting light,” he said. “The permanent and fixed seeming architectural landscape of New York is in a constant state of transformative tango with light, ephemeral and fleeting.”

In The Air also includes four focused stories about city landmarks of Mr. Wilcox’s choosing, from the Empire State Building to Manhattanhenge. The latter is a phenomenon that occurs annually around the summer solstice when the sun aligns with the East-West streets of the city and its brilliant light is framed by Midtown towers. His images of Manhattanhenge are shown on two light boxes in the booth.

Also on view is an animated work by Mr. Wilcox done in collaboration with the Metropolitan Opera, as well as additional wallpaper based on that film. The Tales of Hoffman, an opera about a man who unknowingly falls in love with an automaton, features dancing cartoon liquors, and a real antique automaton who sings over a vocal track of Met performers. 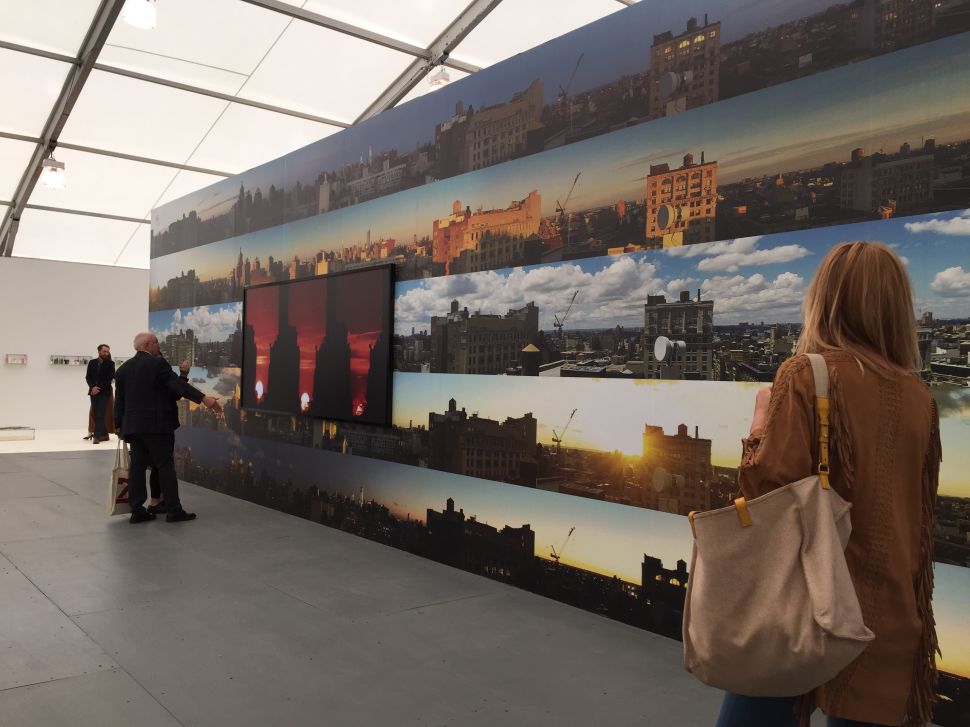