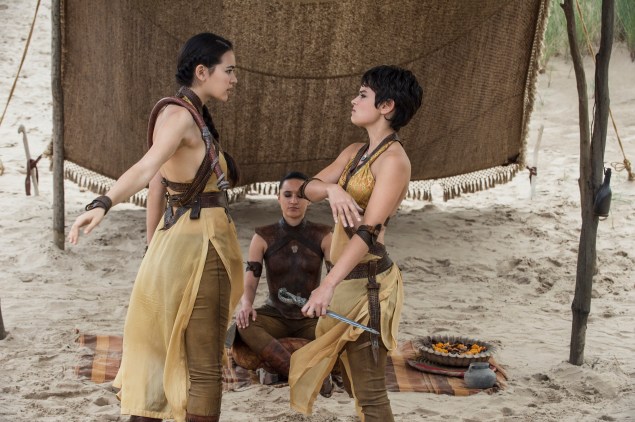 Drew: So, confession: My TV was acting up (still a thing, right?) and I did not see the end of the ep. I feel like Greyworm and Ser Barristan were going to eat it. But more importantly: that was one of tonight’s SEVERAL badass fight scenes. There are so many: Bronn vs. Dorne guards, Jaime vs guard, Sand Spears vs. that guy’s head…what was your favorite?

Vinnie: So first, just to fill you in on what you missed in the last few seconds, Barristan got stabbed and was like “ahhh” then Grey Worm made the save, but then Grey Worm got stabbed and was like “ahhh” but, like, more stoically because he’s an Unsullied. It wasn’t really clear if they were 100% dead though. Do you think they’d do that? Kill them both off? Grey Worm, maybe, but Barristan? Talk about a BOLD decision, right??

Anyway, yes, this episode made up for the lack of fight scenes so far this season by giving us ALL the fight scenes. And while the Jaime and Bronn fight had better mid-swordfight quips, there was just something about Ser Barristan showing up by himself to lay the septuagenarain smackdown on some Harpies that just pumped me up. I, not kidding, whispered to myself “fuck yeah” when he walked into that hallway. Do you know how embarrassing it is to realize you’re the kind of person that would whisper “fuck yeah” to yourself in an empty room because of a TV show? Because I do. I regret nothing. #Barristan4Lyfe

Drew: Grey Worm dying would be horrific but I’m guessing it’s Barristan, because Dany has to feel like she’s losing all her small council. I guess maybe she would lose both of them and be surrounded by untrustworthy hotties, the way she’s always been. She’s got a Kardashian-level responsibility to the people, if you want to think of slave fighting pits as…reality television?

Drew: It was also just a really tight ROADTRIP!! episode. You know, when two guys (or a guy and Brienne or the hound and Arya) get paired off into different two-somes for half a season and just engage in the most BFF-centric behavior and you know they’ll always be loyal to each other after that. Like how Bronn asked Jaime to give Tyrion his regards? Because they were the Patient Zeroes of ROADTRIP!!

Vinnie: I liked how even during one road trip, they were still doing call backs to previous road trips. Like when Jaime was on the boat and they sailed passed Tarth, the Sapphire Islands and all that. And Jaime got that little smile that screamed “Ah, I knew a girl from there. Saved her from a bear once. True story.”

Drew: Littlefinger getting all Frank Underwood with Sansa…I’ve got to admit, I kind of loved it and wished I didn’t have to see the two of them split up. I really like watching Littlefinger get turned on by the idea that he’s just a really good tutor.

Also: you know that anyone who has been in a ROADTRIP!! scenario just enjoys Tyrion’s company. But he’s kind of allergic to stoicism, and is just a really intense person in general who never shuts up, so the worst thing you could have him do is have him paddleboating with Ser Friendzone Jorah. Maybe he’d also really get on Brienne’s nerves. But secretely, everybody loves him because he is the House M.D. doppleganger back in medieval times.

Vinnie: I love how Jorah solves all his problems: like an angry child would when presented with too much logic. I know Tyrion’s not the most trustworthy person in the world, what with the alcoholism and the father murdering and the general stigma of being small in the Game of Thrones universe, but he does make a pretty good case for not being chained up on that boat. Jorah really thought he had the most ingenious plan when he decided to kidnap Tyrion and bring him to Daenerys, but then when Tyrion was like “actually I was heading there anyway” Jorah’s response is “Well, um, well, uh I’m gonna’ punch you in the face how about that?”

Drew: Hasn’t anyone on this show learned that earnestness is the opposite of staying alive? I guess there are still a few dogmas still alive, like the Brotherhood of the Watch, and The Lannister Sparrow Who Looks Like Peeta But Is Brain-Crazy. But in general, you need to be glib and conniving, not “bringing lambs to the alter” kind of noble.

I got this Hangover-vibe: this suddenly seemed very Bro. Even the strong lady scenes–Cersei and High Sparrow from Brazil, Margery and Tommen, Sansa Stark just fucking nailing her Littlefinger impression to Littlefinger (turning him on SO much, obvs), Melissandra vs Jon Snow’s re-virginizing himself–it’s still the dudes who are getting things done. And that’s actually pretty rare for this show? Maybe it’s because dudes are better at fighting. #SunSpearTrollin

Vinnie: Kind of, but kind of not though, right? Tommen is basically the definition of “not getting things done.” He’s slowly finding out that being king isn’t just sunshine and marathon sex sessions, and the way he was completely backed down by what amounts to a group of very angry monks was great. And his excuse was “there was no way to resolve the situation without violence.” haha, okay Tommen. Do you even watch the show you’re on?

Drew: I can’t even with Tommen. Do you know how much I suddenly missed Joffrey for his “no bullshit” policy? Poor Tommen. He’s too good for this world. Maybe he’s the Lannister version of Rhaegar Targaryen, who got a lot of play this week. Apparently he liked to play instruments and was good at fighting (as far as Littlefinger remembers, and that man spends all day attending jousting competition), and he may have pulled a West Side Story with Ned’s sister, Leanna, or may have raped and kidnapped her. Tommen has that same sort of “Will he or won’t he?” dark force looming over him.

Vinnie: Um, speaking of Leanna and Rhaegar and completely unfounded speculation, did you catch when Stannis said “maybe, but that wasn’t Ned Stark’s way” when his wife accused Jon Snow of being fathered on a “tavern slut?” Was that the most casual dropping of major foreshadowing ever?

Drew: Ugh I have so much more to discuss incoherently. Like:

You can get Greyscale from a DOLL?

Vinnie: Yes. Correct me if I’m wrong, but I’m pretty sure that was the entire plot of Annabelle. 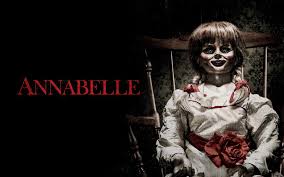 Drew: IS STANNIS THE BEST DAD ON TELEVISION? 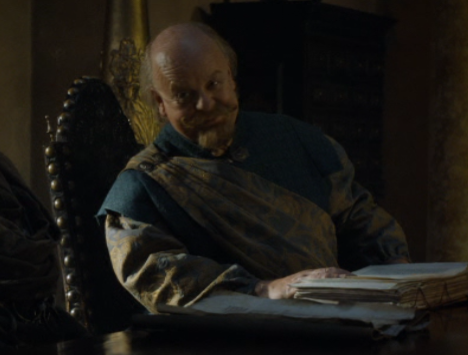 “Oooh I’ll give your regards to the Titan of Bravoos har har har.” I’m not kidding when I say Mace Tyrell is my favorite character on this show. Possibly television. Literally every time he speaks at all there’s a whole room full of people going, “just shut up, Mace.” And he just takes it. He’s like the Meg from Family Guy of the small council.

Drew: I mean, did we just see Mace Tyrell bite it? That’s why Cersei sent him away with that scary knight, to kill him. Right? Also: she did not think it through when she signed off on the dry state notion.

But: Was that snake going to EAT Jaime’s head??

Vinnie: “Now Jaime, that’s not the best way to get AHEAD on your journey har har.” – Mace Tyrell.

Drew: Why was that scorpion just IN a head-bucket?

Vinnie: It was hiding from the scorpion’s natural enemy, spider fingers.

Drew: Oh my god is Dorne just Area X? From The Southern Reach trilogy? I figured it out. Done.

Vinnie: Yes, in the way that nothing really makes much sense there. Take this Dorne logic, courtesy of Obara Sand: “My father said the gods let us choose our weapons. But then he sort of made me use this spear. So it wasn’t really much of a choice…I guess. Uhhh” *chucks spear at head in the sand 2 feet away*

Drew: That’s such an Administrator thing to say. 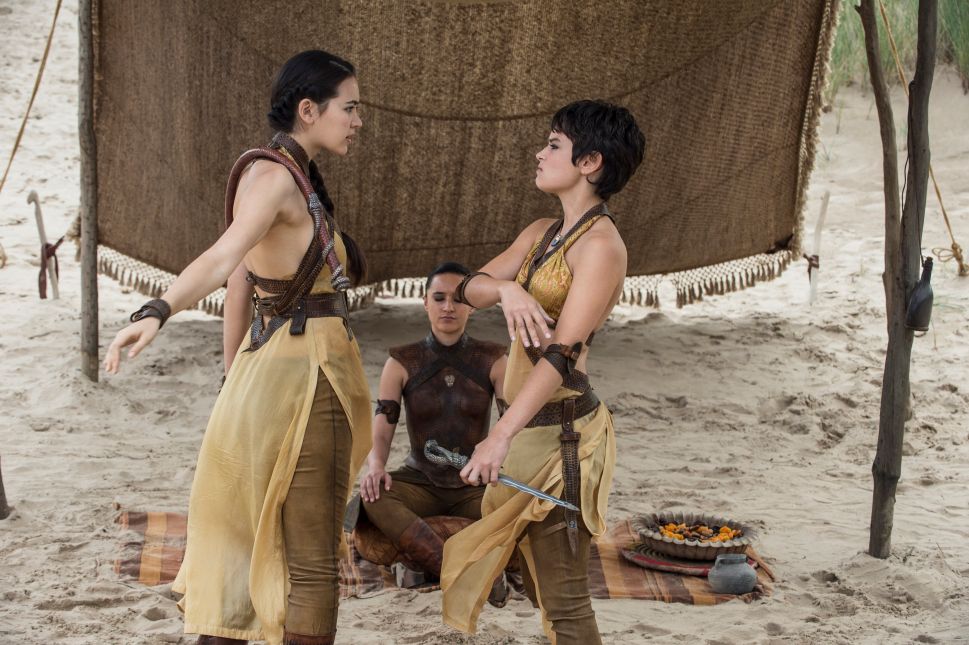