“Leaders in the five county organizations in New York City are urging former Gov. George Pataki to run for President,” The Observer reported yesterday. Possibly concerned voters now know all they care to know about Jeb Bush after the debacle last week over Iraq, in which one prominent D.C. journalist described Jeb’s avatar as “Jell-O.” By all means, Mr. Pataki should run. If Bush fades to grey there is no full-tilt “establishment” candidate in the Republican lineup for 2016, on whom big deal money would be willing to place its chips.

And for a top level establishment candidate, Mr. Pataki has remarkable good Tea Party chops. None said it better in 2010: “Obama’s government-controlled health care significantly jeopardizes jobs, our economy and our children’s futures by spending one trillion dollars and adding $600 billion in new taxes on families and businesses. ObamaCare represents an unprecedented overreach of the federal government into the lives of individuals and tramples on the Constitution as evidenced by 19 states filing suit against the federal power grab.”

Still there is a problem here; an error in thinking, generalized throughout conservative culture, which could land conservatives going into 2016 with a one-way ticket to Palookaville.

The feeling is, now it is our turn. Because Hillary Clinton will bring an easy ride to victory. Nobody likes her, says commentator Ann Coulter. And she doesn’t like anybody. But it is a grievous error to think that she will be easy to beat. Bill, it might be said, is a generational cult figure and probably more than half of his generation likes him; many actually adore him and can think of none other. And they are more than 40 million born more or less the same moment in 1946, as if born to the same mother. They show up to vote. They have lots of money.

This thinking, that beating Hillary will be a cakewalk, would naturally compel conservatives to maximize the advantage and tack more deeply to the right; try new things with Texas Senator Ted Cruz or Wisconsin Governor Scott Walker, or forge a creative new direction with libertarian Rand Paul, Senator from Kentucky.

But if you look at the lineup—19 of them showed up here in New Hampshire in mid-April—it is pretty thin. And Hillary is not as bad as her tormentors say she is; no one could be.

As Secretary of State, she got high marks from Robert M. Gates, Secretary of Defense in the George W. Bush administration, in his book Duty: Memoirs of a Secretary at War. Likewise from Admiral William McRaven who organized and executed Operation Neptune Spear, the special ops raid that led to the death of Osama bin Laden. Rumor had it that he left his job as ninth commander of United States Special Operations Command in 2014 to prepare for a possible run as Hillary’s VP. And regarding Benghazi, it could in the end work against those assailing her. Things happen in war. They happen all the time.

The Clinton culture should instead be understood as a cultural phenom, not a political problem; a culture of attitudes formed and acquired by those who came through the Sixties. People who like Bill and his sub-agency Hillary don’t do so because of some Jeffersonian vision or legal ethic or high-minded moral code; they like them as they like The Beatles or Helen Mirren or Thai food. It is all of a geist and conservatives are unfortunately left out of it.

Understand this; the Clintons are deadly. They have armies behind them and those armies have money. Sending a secondary candidate could have catastrophic consequences. Conservatives need to send their best forward to countervail. Since Jeb’s recent debacle, eyes have already turned to former Massachusetts Governor Mitt Romney. With South Carolina Governor Nikki Haley or Nevada Governor Brian Sandoval as his VP this time, he would win in a landslide. He has apparently only one flaw and it is easily compensated for: As President, he will not be allowed to take care of the dog.

But does Mr. Romney really want to be President? Youth wants to know.

Years ago, to simplify as much as possible, I designed a system to judge presidential candidates as you would cheese at the county fair or grade New Hampshire maple syrup. Top rank would be Governor of a big, major “initiative” state; New York, Massachusetts, California, or Texas (Pataki, Romney, former Texas Governor Rick Perry). Next, commander of a major military operation like Eisenhower. Then governor of a large population but low political profile state like Florida, which would be Jeb Bush, or just plain small state like Arkansas; Mike Huckabee. On down, CEO of a major corporation or Senator; there are always lots of Senators who want to be president, like Rick Santorum. Finally, “Just Anybody” (Lucha libre professional wrestlers of recent immigration, journalists, Charlie Sheen).

Right now, there is only one aspirant in the first rank: Rick Perry, but he feels uncomfortable outside of Texas and draws only 2.8 in the New Hampshire primary polls, below Ben Carson but just above South Carolina Senator Lindsay Graham.

This presents a dangerous situation for America. It brings today the very real possibility of a Hillary Clinton presidency. And with that, anything could happen, including the radicalization of the Western states and their aggressive refusal to cooperate in any way with Washington. Something resembling Britain’s Bloodless Revolution in 1688 could well occur in America; a cultural conflict to determine what kind of people we will be together or apart.

George Pataki should jump in. Mitt Romney as well, to shore up the first line of defense. Adding a little old school stock would advance the discussion and possibly begin to stabilize America after more than two decades now of random and dangerous instability. 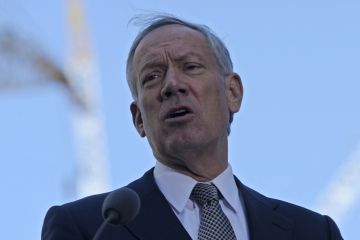