Oh, Gotham. Old friend. You almost had me. I almost fell into your sick trap. You almost, almost crafted a scene built on so much nostalgia and familiarity that it erased the fact that every scene that preceded it was filled with more holes than Don Maroni’s head.

I’m talking about the final scene of not only this episode but Gotham‘s inaugural season, with a young Bruce Wayne frantically coming upon his father’s hidden fireplace staircase…thing. The chemistry between David Mazouz’s Bruce and Sean Pertwee’s Alfred this season has been a constant highlight, and this scene was no different. Everything from their bewildered looks to the call-back of Bruce hearing classical music every time his father was in his office was just well done. And the slight hint of bat squeals? So good. So as a finale, this episode delivered, and by that I mean the last two minutes effectively set up a season two. Unfortunately, there were at least 44 other minutes of Gotham.

(Of course, this is all assuming that you didn’t see any of the promos for this episode, which not only showed the ending but literally spelled out the fact that it was showing you the ending.)

At one point in this episode, after Barbara went kooky bananas and attacked Leslie with a knife, Leslie cries into Jim’s shoulder: “She just went crazy!” Unfortunately, “she just went crazy!” counts as legitimate character development on Gotham. It always has.

Because, well, I’m confused. Did Barbara’s run-in with the Ogre make her lose it? Or was it her upbringing? Her upbringing which, yeah, didn’t sound pleasant but didn’t really sound like it warranted a double murder either. Was she always a knife-wielding psycho? Or is that a recent development? I wouldn’t have a problem with a show posing these questions in a season finale if there had been any indication at all this season that the writers themselves knew the answers. I remember before the season started, we were promised a different Joker every episode. Well, that didn’t happen, but I do feel like we got a different Barbara every episode. Unless #THEORY Barbara IS the Joker, in which case, well, at least she doesn’t have “Damaged” tattooed in cursive on her forehead.

Similarly, Edward Nygma got the “he’s crazy now” treatment, and it was actually pretty damn cool, but it was also shoehorned into a single scene after all the other important stuff was done. First of all, I’m really glad Kristin Kringle figured out that riddle because it was just a really easy thing to see. Try harder, guy who literally has the word Riddle in his villain name. But yeah, again, is this split personality thing new? Or are we just seeing it for the first time? I have a feeling if you put that question to the people who plan Gotham’s stories, they’d throw a comic book from the early ’90s in your face and assume that answered your questions.

There were a whole lot of other plot points that didn’t exactly hold up (Why did ALL Maroni’s henchman completely pass the hospital room where both Falcone and Cobblepot were sitting, vulnerable, just to kill Jim? In fact, I question the logistics of clearing out an entire hospital just to kill one guy.) But all that I can basically forgive, because it pales in comparison to the baffle-copter that is the character of Fish Mooney.

It legitimately pained me both physically and mentally to watch how hard Jada Pinkett-Smith was trying to make her grand entrance into that warehouse look cool. You know what’s not cool? Taking a full two weeks for a trip to Hot Topic to plan your new wardrobe and hair style. Also, it was heavily implied in the very first episode that her former hair was a wig. Is this…also a wig? Or is that what was under the wig the whole time?

Listen, I know that in the end when Oswald throws Fish off the roof, she falls into which, in most things, means she can probably come back in a season or two. But, Gotham, honestly, let’s just not. She’s dead. Fish Mooney as a character just didn’t work, and we as a society should probably just move on. Give Robin Lord Taylor’s Penguin someone better to aim his scene-stealing enthusiasm at next season.

(Again, this is all assuming you weren’t aware that Jada Pinkett-Smith announced she wasn’t going to be in season two a full two months before the finale. Does this show just not like surprises?)

Oh, and Selina Kyle suddenly thinks working for Fish is the coolest thing in the world, so I guess we call her … Catfish? 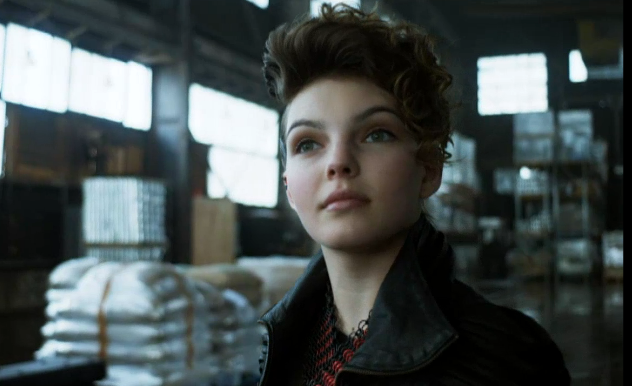 Did everyone seriously take two weeks just to get different hair?

So full disclosure, I watched this episode on a big screen at the Fox offices so I couldn’t really look as hard for Batman references as I usually can. There wasn’t anything glaring, accept that the guy who likes Riddles is now the Riddler and the Cave that the future Batman finds probably turns out to the the BATCAVE. Oh also I noticed the name Malatesta and Sons on the side of a truck which might refer to an actor born in the late 1800s that went uncredited in the Mark of Zorro. Let me say, wow that would be an admirably far stretch.

So since I have no references to give, and this is the last Gotham for a while, let’s have some WILDLY SPECULATIVE SEASON TWO THEORIES.

So it was pretty much confirmed that Barbara and the Ogre had a ton of sex before she found out he was crazy (and…maybe after?). I’m thinking that he got her pregnant, and she’ll give birth to a son while she’s locked up in the Arkham loony bin. The son will go into foster care, grow up to take his father’s name and voila you have a new origin for James Gordon Jr. from the comic books, Jim Gordon’s certifiably insane offspring.

Conversely, Jim is going to get Leslie pregnant. It will be a daughter, and Jim will insist on naming it Barbara after his insane ex-fiance who tried to murder Leslie one time, because Jim is really bad at reading the room.

Alfred and Bruce descend the steps they find at the end of the season one finale, and who do they find but…Thomas Wayne in a full Batsuit. Plot twist: this is Flashpoint Thomas Wayne, who is actually Batman in an alternate universe. Because, as we soon learn, the button Bruce found not only opened up the fireplace but also the fabric of time and space. Furthermore, in this alternate universe it is Bruce Wayne, not Thomas Wayne, that is dead. Young Bruce looks at the father he thought he saw murdered right before his eyes, while Thomas looks down at the son he thought he lost forever. “Bruce…I thought you were dead,” Thomas says, tears streaming from the Batman mask, before embracing Bruce as Alfred looks on and is it wrong that I’m tearing up right now?

Multiple episodes are devoted solely to Jim’s attempt to grow out his trademark mustache…and it gets mixed opinions at the workplace.

Fish Mooney will crawl onto the shores of Gotham City. “Didn’t you know, Penguin?” she’ll say, “Fish can swim.”

I, in turn, will stop watching TV forever. 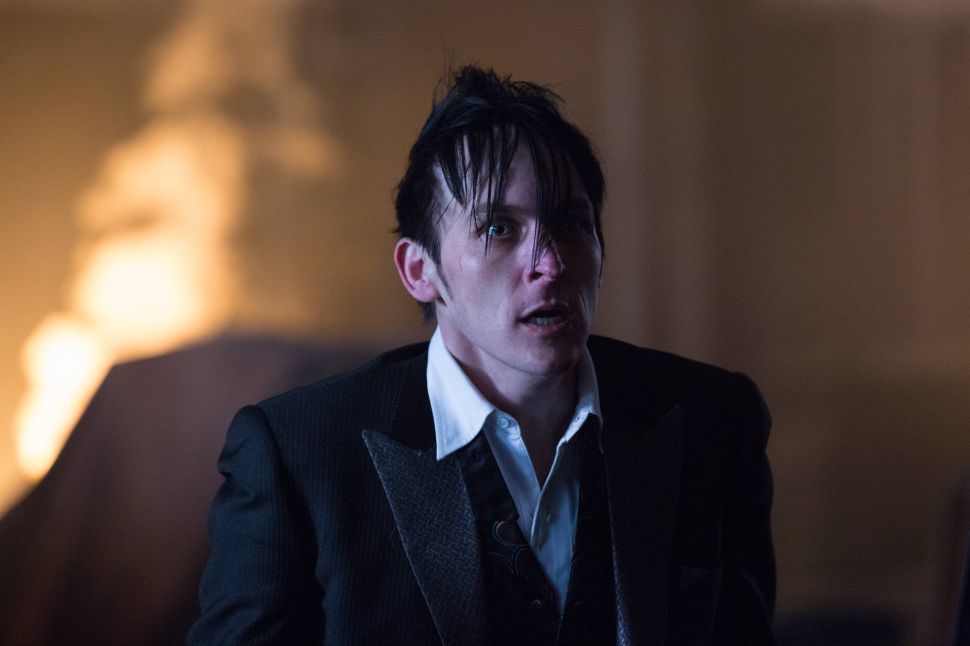