A few months back, when we visited the red brick townhouse at 32 Grove Street, which manages to be charming–nay, downright cute–despite its considerable (21-foot) girth, Jeremy V. Stein, the Sotheby’s International Realty broker who shared the listing with his colleague, Jennifer Lanza, told us that the seller, Richard Grand-Jean, had done a really nice job not ruining the place. “This is one of the few houses I’ve seen or sold that has not been messed up by someone,” he said. And of course, the urge among modern townhouse buyers to screw up quaint old places can be strong: “They put iPads in the walls, or make the whole back glass, which is fine, but once you’ve done that you can’t go back.”

And on that note, here’s hoping that Richard Robb and Ianthe Jeanne Dugan, who just closed on the home for $11.25 million, according to city records, do not have visions of glass backing dancing in their heads. (They did, however, manage to knock $500,000 off the asking price, which would be a good starting point for relieving the four-story house of its mid-19th century allure in favor of something a little more spaceship-esque.)

The triple parlor is at once homey and grand–something, perhaps, to suit the tastes of both Ms. Dugan, an investigative reporter, and Mr. Robb, the CEO of a hedge fund that shares its Manhattan address with Abercrombie and Fitch’s New York flagship. Glass pocket doors set off the rooms, which are light-washed–courtesy of windows that stretch from floor to 12-foot ceilings–and garnished with marble mantels and plaster cornices. The garden floor meanwhile offers a handsomely rustic kitchen with exposed brick and wooden beams, from which Mr. Grand-Jean, a principal at a financial consultancy, hung cookware in a whimsical array.

There are five bedrooms, original wide plank floors, and a dining room that opens through French doors onto a landscaped brick patio with Secret Garden-variety appeal. 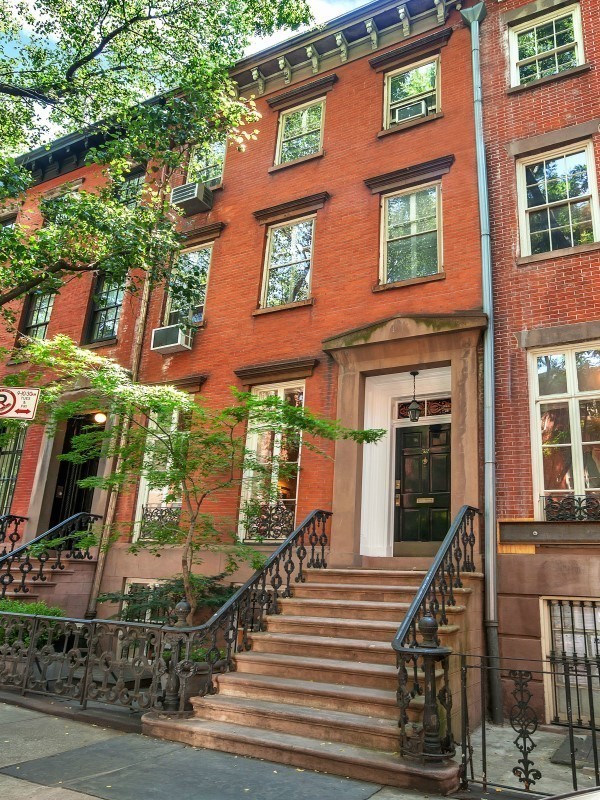