The Studio Museum, which concentrates its focus on artists of African descent, has decided to acquire two of the three artworks in its current show Samuel Levi Jones: Unbound. The other artwork in the exhibition had been previously purchased by a private collector.

Mr. Jones was awarded the Museum’s prestigious $50,000 Joyce Alexander Wein Artist Prize last October. The annual prize–now in its ninth year–was established by musician and philanthropist George Wein in honor of his late wife and is given to an African-American artist “who demonstrates great innovation, promise, and creativity.” Former recipients include notable artists such as Gary Simmons (2013), Glenn Ligon (2009), and Lorna Simpson (2006).

Unrelated to the award is the artist’s first museum show, which opened in March and was organized by associate curator Naima J. Keith.

“Samuel Levi Jones’s works Unbound and Don’t Feel Right (both 2015) are exciting additions to the Studio Museum’s growing permanent collection and will serve as an important resource for our exhibitions for years to come,” said Keith. “The Studio Museum has had a long tradition of supporting emerging artists early in their careers. We’re thrilled that we have been able to champion Sam in a number of ways over the past year, including awarding him the ninth annual Joyce Alexander Wein Artist Prize in October 2014, presenting his exhibition Samuel Levi Jones: Unbound this spring, and now accessioning these two amazing works into the collection.”

The show consists of three gridded wall works made from stitched-together law book covers and spines and includes the artist’s opus Unbound: a 28.5-foot-long patchwork of book spines that shares the exhibition’s title. Mr. Jones’ artworks, which visually reference the authority of the modernist grid, call the canonical identity of the American law books from which they’re made into question while also criticizing our country’s justice system which is supposedly blind.

Unbound will be at the Studio Museum through June 28th. 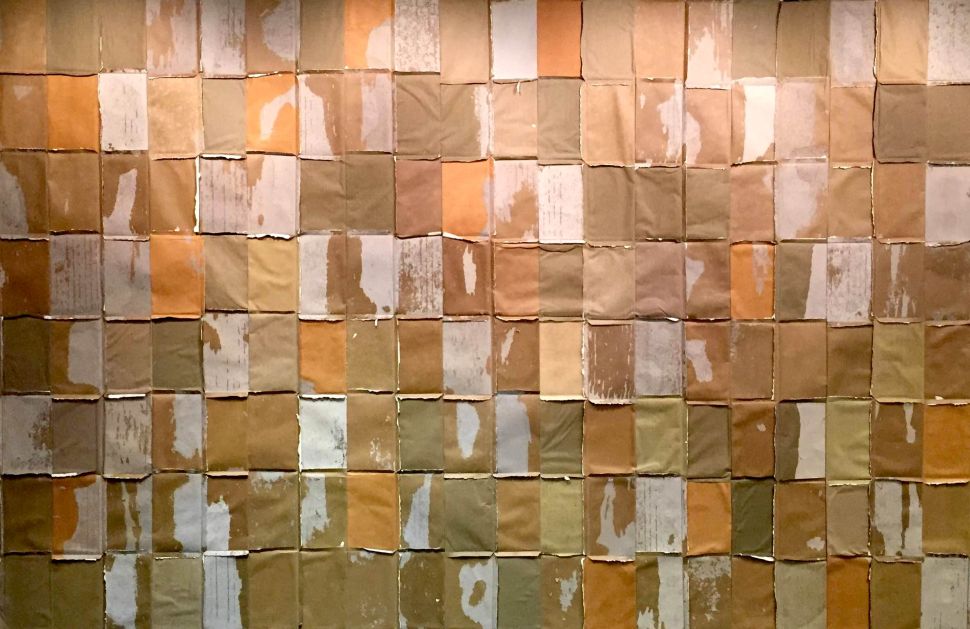