It’s steak night on Hell’s Kitchen! Steak night! Did you hear me? I said it’s steak night! Time to slap those steaks on the steak-cooker and steak up the steakiest steaks you ever steaked! Man, does everyone say the phrase “steak night” a lot during this episode.

Tensions are high in the kitchen tonight. The contestants are informed that this will be the last night they will be cooking on two different teams. After service, the six remaining chefs will be awarded the coveted “black jackets,” signifying their promotion to a single crack commando unit. To stress the importance of these new culinary threads, a black jacket descends from the rafters, framed behind glass and surrounded by lights like a lesser-known piece of memorabilia from the Hard Rock Cafe. This…this is what these chefs have been cooking their whole lives for, or something.

Steak night challenge! The contestants have the chance to strut their stuff individually this time, but not without the usual bunch of bizarre complications. This time, the chefs find themselves confronted with a wall of small lockers that gives the kitchen the appearance of your finer Los Angeles Greyhound bus stations. The lockers are loaded with various cuts of steak (for steak night!), and the keys that open them are scattered on the floor along with a hundred other keys most likely borrowed from Chef Ramsay’s Maserati collection. Oh, but also, some of the lockers don’t have meat, and just contain a sign saying “Try again!” It takes some of the contestants upwards of ten minutes just to claim their product, and with the clock ticking, even the chefs are starting to realize these challenges are a little ridiculous. T is the first to open a locker, and, finding a rib cap steak inside, declares, “I don’t give a fuck what a rib cap is, I’m taking it.” That’s my girl. Let’s cook.

This late in the season, it’s nice to finally see what these chefs can do when left to their own devices. Chef Ramsay judges the dishes “king of the hill” style, and Meghan’s simple but perfectly cooked porterhouse earns her the throne for most of the challenge. She’s toppled at the last minute by Michelle, who turns a cheap flank steak into a nicely composed dish with the addition of a black bean puree and mango salsa. Meghan is not psyched. She grumbles about being unseated by a “deconstructed fajita” on what’s supposed to be steak night. Steak night! Her frustration is understandable. All season, Meghan has been head and shoulders above the other chefs in terms of ability and composure. Meanwhile, 22-year-old Michelle is a cheery underdog, but constantly infuriates the other contestants because she acts and talks like a 22-year-old.

Steak night dinner service! As usual, the dining room is filled with the most available celebrities in Hollywood, including “Body By Jake” fitness guru Jake Steinfeld, who I assume was invited because his name sort of sounds like “steak night.” Service is fairly uneventful. For the most part, the chefs just keep their heads down and work. Michelle, still high off her win, needles Josh about his knife technique, sending him into a garnish-related spaz attack. On the blue team, Meghan makes a rare timing blunder, leading Nick to observe that she’s not a robot after all. Minor errors aside, the blue team finishes service without incident. Chef Ramsay presents them with their black jackets, and in keeping with the pomp and circumstance of the moment, the recipients are told to go put them on in the broom closet. Seeing their competitors already wearing their rewards sends the red team into even more of a tailspin. The unfortunate loser tonight is poor Alison, who tries to manage two stations at once and is overwhelmed. Despite being consistent since day one, she is shown the door, and we are left with six chefs. Now the knives are out and things are about to get bloody. Kind of like steak night.

It’s a Hell’s Kitchen twofer this week, and that means we finally get a glimpse of the chefs all working together as one team. The contestants kick things off by staring into the mirror and rhapsodizing about how great they look in their fancy new black jackets, which are exactly the same as the old jackets but with different colored patches. Down in the kitchen, Chef Ramsay stands in the middle of a ridiculous Frankenstein’s lab-like chemistry set holding six test tubes of ooze. Ramsay explains that he has extracted the essence of six different foods into the test tubes, however one does that, and the contestants must guess what it is they’re tasting. The setup is ridiculous, but the flavors are legit because Milly and Nick manage to distinguish lasagna from spaghetti and meatballs with just two sips of blue sludge.

This is all prelude to the “Taste It, Then Make It” challenge, in which the chefs, split into pairs, must recreate a seafood dish prepared by Chef Ramsay himself. Asked to choose up teams, everyone makes it abundantly clear that they don’t want to work with Josh, who in recent weeks has turned into an amped-up version of Chris Farley’s self-flagellating talk show host. Meghan takes one for the team. Nick and Melissa are the second team, T and Milly the third. And let me say how fun it is to see T finally taking center stage. She was made to look like trouble early on, but not only is she consistently hilarious, she seems to know her stuff and has little patience for those who don’t. (See also: Josh.) Nick and Melissa win the challenge for choosing the correct protein (sea bass) and their use of soy over sake in the sauce. Their prize is a tour of Long Beach and visit to the Queen Mary. Over lunch in the ship’s restaurant, the two of them bond over how their competitors underestimated them. “I started slow because I didn’t want to stand out too much,” Nick insists. Oh, and did they both make Titanic “king of the world” jokes while standing on the ship’s deck, you ask? Friends, you know they did.

The other chefs are sent back to the kitchen to prep mashed potatoes for the Midnight Mission, which serves the needy and homeless in Los Angeles. Big Man Milly tears up at the thought of working with the charity. He was homeless himself for part of his life, he tells us, and it’s a touching moment. But it’s upstaged a few moments later when T, annoyed at Josh’s laziness in the kitchen, tells him to “STOP STIRRING LIKE A LITTLE BITCH!” Josh can’t seem to focus, which prompts Milly to start calling him “Uncle Randy,” in reference to the recently departed country bumpkin contestant. At this point, Josh is twitching like something is short-circuting behind his crazy eyes.

On to dinner service, with special guest Tatum O’Neal! Service becomes a lot more interesting once the contestants need to handle the entire dining room as a team. You get to see the meal unfold, instead of just watching a montage of Chef Ramsay throwing things in the garbage. Of course, service is also interesting tonight because Josh is having a full-on psychotic break in the middle of it. He’s making noises, talking to himself, and doesn’t hear anything anyone else is saying to him. At one point, he lights a huge fireball in a pan, and is about to douse it with oil before the others shout him down.

Service is otherwise pretty smooth, though Tatum O’Neal is a tough customer. Seated at the chef’s table, she loudly declares a dish “mediocre.” When Josh sends out an underdone Beef Wellington, she sends it back…though not because it’s too rare or doesn’t taste good, but because “it’s not up to my standard.” I never thought of myself as having a particular standard of Beef Wellington to which all others must strive, but I guess I should start considering it.

Despite the returned dish and Josh’s rapid descent into madness, Chef Ramsay declares this the best service of the season. It’s weird that Ramsay doesn’t comment on Josh’s meltdown because the other chefs are all over him for it, and he’s the obvious one to go home. Bye, Uncle Randy. Stop stirring like a little bitch. 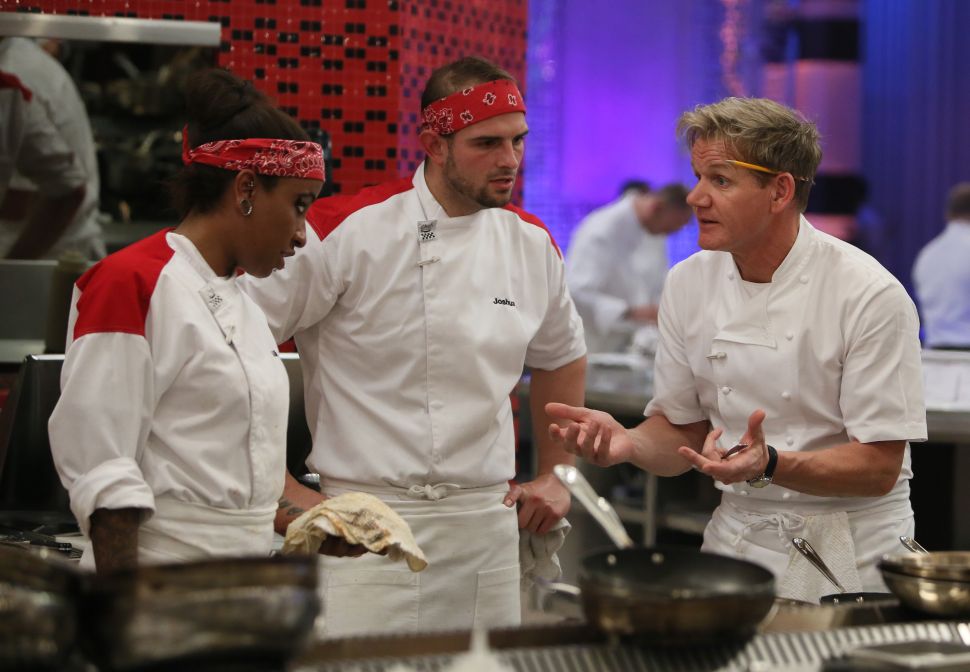