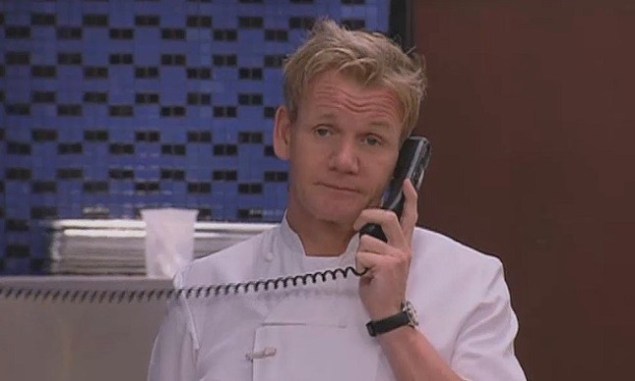 Eight chefs remain in Gordon Ramsay’s valiant quest to find a sous who understands what medium rare is, and the word of the day in Hell’s Kitchen is “leadership.” Everyone’s either stepping up as a leader, accusing someone else of not leading, or bemoaning the lack of leadership. So what better way to boost morale than with a high school pep rally? Seventy-six trombones (if my count is correct) summon the chefs to the kitchen, where Ramsay informs them that night’s dinner service will be for the Calabasas High School homecoming celebration. For their first challenge, the chefs will prepare three dishes, to be judged by a trio of high school students who have the sort of culinary expertise that comes with watching a few episodes of Hell’s Kitchen. The panel consists of a spunky chipmunky cheerleader, a girl who’s probably the second lead in all the drama club musicals, and a snotty kid named Max who says things like “this dish doesn’t wow me.” Some day soon, he’ll be sending back his first bottle of wine for absolutely no reason. In the kitchen, the contestants argue briefly about whether it’s more strategic to cook down to a high schooler’s palate, or create something elegant and trust that the kids will enjoy it. The women choose to not compromise, which turns out to be the wrong decision. With Max casting the final vote — a responsibility he takes very seriously — it’s the guys’ deep-fried steak nugget that secures them the win. Max helpfully delivers one last kick in the ass to Michelle, informing her the okra is overseasoned, before going off to find some nerd to write his Princeton application essays for him.

That makes five challenges in a row that the blue team has won, an impressive streak that counts for absolutely nothing other than filling a few minutes of time in the middle of the show. This week, Ramsay announces the men have won a “swashbuckling pirate-themed dinner adventure,” and if that phrase doesn’t conjure up visions of culinary delicacies, the guys’ giant blue fishbowl drinks should tip you off to the level of class on display. The place is basically Medieval Times with pirates. Nick, Josh, Milly and Randy are the only four guests in the entire restaurantorium. It’s unclear whether that’s because Hell’s Kitchen rented the place out, or if Pirate Dinner Theater just didn’t sell any other tickets. Meanwhile, back in the kitchen, the women have to set up the dining room for the homecoming meal, under the direction of Max and company. Michelle, who has only been out of high school for a few years herself, irritates her team by trying to bond with the students (she was totally on the homecoming committee, too, you guys!), while T just waits for the next opportunity to push Michelle’s head down onto a smoking hot flattop grill.

The high school students arrive for dinner, all wide eyes and raging hormones. I cant fault their enthusiasm. If my high school homecoming was in a gigantic TV studio-slash-restaurant owned by a celebrity, I’d probably think it was pretty cool, too. Ramsay does his part to make the night special by being extra screamy. And what’s he mad about this week? Believe it or not, nobody undercooks scallops! Nope, this time, it’s dried pasta that gets put on a plate still as hard and crispy as the moment it was taken out of the box. In the blue kitchen, Milly triple-checks a stove to ensure that it is on, when in fact it is stone cold. On the girls’ side, T has the opposite problem and accidentally sets the flattop on fire. Unfortunately, Chef Ramsay’s eyerolls and facepalms fail to impress the high schoolers, who are all too busy drinking vodka out of hidden flasks and practicing their bra unclasping technique under the table.

Both teams manage to finish service, but Ramsay declares the red team the winner for their comparative non-panic under fire. Back in the dorms, the men battle it out about who should be up for elimination, and as usual, the best compliment the guys can give themselves is that they’re not the absolute worst person remaining. Nick complains that he and Josh aren’t even on the same page when it comes to cooking. “I’m on chapter 33, and he’s on the second chapter stuck on the first sentence,” he insists, which is frankly pretty weak for a sassy gay burn.

Big twist! Nobody goes home! Instead, Josh is reassigned to the red team, and talented but bossy Meghan is sent to the blue side. The men seem grateful to have an obviously capable ass-kicker join their crew, but I predict trouble for the red team, who are all separately determined to emerge as the strong team leader. Yeah, these guys are going to kill each other before this is over. But hey, lucky for us, since nobody got eliminated, that means we all get one more risotto-packed episode before the season ends. 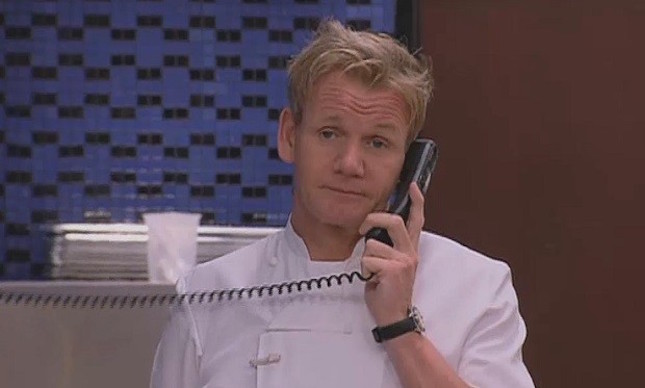