No contestants were sent home on last week’s Hell’s Kitchen. Instead, Chef Ramsay opted to surprise his charges with the greatest trick the devil ever played: swapping two contestants between teams. The most immediate effect of this switcheroo is that there’s nobody for the chefs to insult during their weekly post-elimination bitch session. Instead, they trash talk each other, criticizing Josh for his goofy nonchalance and hating on Meghan for rolling her eyes too loud.

Sound the herald trumpets, because this week marks the annual taste test, the only challenge Chef Ramsay has brought back for all 14 seasons. And if your heart is set a-racing by the thought of people in headphones chewing, strap yourself in. The game is further complicated by throwing a contestant from each team into a dunk tank. If their teammate fails to correctly guess two of the four ingredients presented to them — objectively, a pretty low bar — the dunk-ee is plunged into freezing cold . It’s this sort of real world training that makes Hell’s Kitchen the culinary competition show of choice for amusement park chefs like the recently departed Adam.

The chefs are further infantilized by having Ramsay spoonfeed them their ingredients, “here comes the airplane” style, and then lifting up their earphones to paternally whisper whether they got the answer right or wrong. Most chefs get the answers wrong. Presented with apples, T guesses pears. Given a spoonful of zucchini, Milly guesses pears. Josh and Nick go head-to-head on their taste test, and the only food they both identify correctly is American cheese. A handful of chefs are unceremoniously dumped into the for reasons I still don’t entirely understand. Great taste test! Can’t wait for number 15.

The red team — now down to Michelle, Alison, T and Josh — wins the prize: a deluxe caviar tasting. It’s the perfect opportunity for the chefs to experience some rare product, and for the home viewing audience to learn a little bit about a delicacy they might otherwise be unfamiliar with. Maybe we’ll get a little information on the different types of caviar, or perhaps how it is sourced and prepared? Nope. Instead, the entire segment is focussed on how expensive the stuff is. The contestants can not believe they’re eating something that costs north of thousand bucks. They might as well have just served the chefs those bags of shredded dollar bills you buy in the U.S. Treasury gift shop. Meanwhile, the blue team — Nick, Milly, Randy and Meghan — has to stay behind and peel grapes for that night’s very special sangria. (Personally, I don’t eat at any restaurant that doesn’t have an extensive sangria list and a professionally trained sangria-elier.) Randy, always happy to play up the country bumpkin stereotype, is simply grateful not to be eating fish eggs. I mean, ew, gross, guys.

It’s another very special dinner service tonight at Hell’s Kitchen, and Chef Ramsay announces he has closed the restaurant to the public, insofar as an event at a TV studio that requires getting on a waiting list for tickets is a “restaurant open to the public.” Tonight, it’s an intimate dinner for two charities, the Step Up Women’s Network and Fran Drescher’s Cancer Schmancer. In honor of the event, Ramsay has a prepared an all-new dinner menu that features only three of the four things Hell’s Kitchen serves every other night of the year. There is lobster risotto and pan seared salmon and New York strip steak, so this should be a cakewalk for the contestants, right?

Sigh. On the way to the pass with the risotto, the blue team forgets how to count and puts out first way too many plates, then too few. Ramsay freaks when Nick wipes down a plate with a filthy rag. Josh, determined to show leadership, repeatedly overcooks the tuna, eventually depleting the kitchen of its entire supply. Luckily, the diners are unconcerned. Presented with a dish, Fran Drescher purrs, “Whatever it is, it’s delicious,” which is the Hell’s Kitchen equivalent of being awarded a Michelin star.

Ramsay declares the red team the losers, and Josh and Michelle are up for elimination…except what’s this?! Chef Ramsay decides to send Randy home instead, because rules and consistency are meaningless on this show. I’m actually surprised by the choice. Despite being waaaay out of his depth, Randy has been a clutch player for the blue team more than once, but I suppose his folksy charm has outlived its usefulness. He’ll return to the farm grateful for the experience and newly devoted to his craft…but primarily thankful he didn’t have to eat fish eggs. 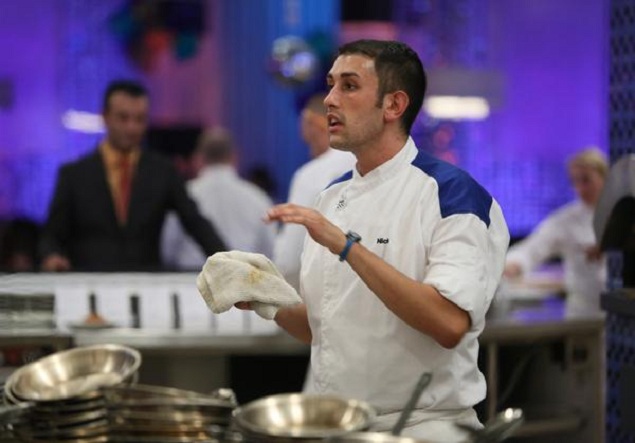